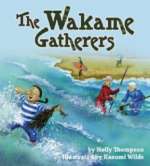 This contemporary realistic fiction tells the story of an intergenerational family relationship between Nanami who lives with her family in Kamakura, a coastal town located southwest of Tokyo, and her two grandmothers. Her paternal grandmother, Baachan, is Japanese, and her maternal grandmother, Gram, is American. The story begins with Gram’s first visit to Japan from Maine during March break. Baachan asks Gram to try gathering wakame seaweed, which is Baachan’s favorite job. Nanami serves as a translator for her grandmothers’ conversations and is the bridge between their different cultures.

Baachan is curious about wakame harvesting in Maine since, like Kamakura, the state has cold waters along its shore, which is a perfect environment for wakame. When Baachan learns that people in Maine don’t usually eat wakame the way Japanese people do, she simply says “Strange.” Her reaction seems to be a negative attitude towards this cultural difference. However, sharing experiences such as gathering wakame, telling childhood stories, and living at the seaside help Baachan and Gram accept and respect their cultural differences.

The story also presents Baachan’s and Gram’s different perspectives on their childhood memories from World War II. After Baachan tells her traumatic story, Nanami expresses confusion about her cross-cultural identity: “I come from both of them” (p. 20). Later, she says, “‘I’m sorry,’ I finally say to one. ‘Gomen nasai (I’m sorry),’ I say to the other” (p. 21). With this, she seems to understand and embrace her identity. Against the backdrop of the waves, surfers, a young happy-looking couple, and a wakame gatherer on the beach, Baachan says “Nanami-chan, always protect this peace” (p. 21), conveying the message that she hopes young people like Nanami keep a peaceful world and have a broad mind like the sea. Pages 23 and 24 show dynamic illustrations of Nanami, Baachan, and Gram standing with their arms high in the sky while holding each other’s hands and with hopeful smiles on their faces. These illustrations represent their relationship, mutual understanding, and bright future. At the end of the story, Nanami and Baachan receive letters from Gram with airplane tickets to Maine. They are very excited about the tickets and Gram’s generous invitation to experience marine life on the other side of the world.

The last two pages of the book include information and illustrations on wakame, including the process of gathering, preserving, and preparing it for eating. Wakame recipes, such as miso soup, salada, and lobster sandwiches, are provided. There is also a glossary of Japanese words used in the text, alongside a pronunciation guide.

The Wakame Gatherers is an excellent resource for learning about the perspectives of people from different countries. It may also open up discussions about bicultural identity, intercultural and intergenerational family relationships, ecologies and food resources, and different coastal lives around the world. While the story focuses on Baachan’s view and experiences of war, it also provides opportunities for readers to engage in an exploration of people’s war experiences from various perspectives. Illustrator Kazumi Wilds’ colorful and vivid watercolor paintings provide realistic details of the daily life of the Japanese people in their coastal environment, such as the use of chopsticks, typical houses, fish shops, and seaweed gatherers.

Based on the themes of cross-cultural identity and intergenerational family relationships, this story can be paired with Take Me Out to the Yakyu (Aaron Meshon, 2012), about a biracial Japanese-American boy enjoying baseball games in Japan and America with his grandfathers; Suki’s Kimono (Chieri Uegaki & Stephane Jorisch, 2003), about a Japanese-American girl excited to wear a Japanese traditional cloth kimono from her Japanese grandmother; and Less Than Half, More Than Whole (Kathleen Lacapa & Michael Lacapa, 1994) about a half-Caucasian and half-Indian boy’s exploration of his identity.

The review of The Language Inside in this issue provides further information about Holly Thompson and her background as a bicultural American living in Japan.

WOW Review, Volume VI, Issue 1 by Worlds of Words is licensed under a Creative Commons Attribution-NonCommercial-ShareAlike 4.0 International License. Based on work at https://wowlit.org/on-line-publications/review/vi-1/