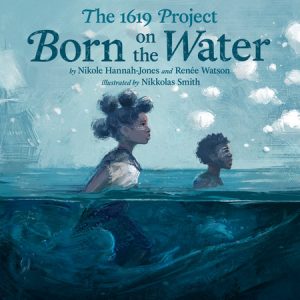 When a young girl is asked to draw the flag of her ancestral land, she is puzzled. A decedent of enslaved people, she can recall the history back three generations but can’t retell her history past her great-grandparents. In response to her feelings of sadness and shame, her grandmother gathers the family and tells the origin story of her ancestors who lived in Ndongo, spoke Kimbundu, and lived rich lives that involved learning, inventions, commerce, vibrant music, medicine, and homes filled with joy and love. In 1619 that rich life was violently interrupted when slave traders captured her people and carried them across the Atlantic on The White Lion, a slave ship that landed in Virginia four years before the arrival of the Mayflower. Those who survived the voyage were said to be “born on the water.” Her ancestors learned new words for home because “We have determination, imagination, faith. We will survive because we have each other.” The grandmother recounts how it was illegal to teach enslaved people to read, yet they became great educators; they were beaten, yet they became healers; they expressed their joy by creating jazz, hip-hop, and the blues. Following the family meeting, the young girl returns to school and proudly draws the American flag, a symbol of the country her ancestors helped build into a democracy that honors the freedom of all humans.

This nonfiction picturebook is structured as lyrical free-verse poems, richly illustrated with oil paintings that mirror the tone of the poems. The beginning poem introduces readers to life in Ndongo. The vibrant colors depict the multi-storied buildings built by these ancestors. Subsequent pages describe their language, including vocabulary describing love, friends, family relationships, and home. The poems and images remind readers that even that long ago, the ancestors lived rich cultural lives full of music, and commerce. “Their hands had a knowing” that let them care for their children, use herbs for healing and flavoring foods, and shape iron into tools. “Their hearts had a knowing” so they created music to make work joyful. “Their minds had a knowing” so they were curious about the world and learned other languages like Portuguese.

The tone changes in several dark double-page spreads; the contrast portrays the day they were stolen and carried away at the bottom of the ship to a New World “they had no desire to see.” The color palette changes again once they land. While the dark silhouettes portray the anger and agony of being forcibly sold away from loved ones, the rest of the palette is bright, illustrating the indomitable hope enslaved peoples carried in their hearts in spite of forced labor. For example, an enslaved person in the foreground looks to the sky and dreams of freedom, while hints of future descendants are portrayed in the clouds, speaking out or gaining an education. In one of the final spreads a parade of historical figures is depicted: Black people who fought for freedom and equal rights (e.g., Frederick Douglass, Benjamin O. Davis), who contributed to the sciences (e.g., George Washington Carver), who were elected to government (e.g., Shirley Chisholm), who were entrepreneurs (e.g., Madame C. J. Walker) or who used a platform to resist Black oppression (e.g., John Carlos).

Suggestions for text sets are found in the educator guide. The titles are organized into four themes and profile a wide range of perspectives and contributions to Black history. One sample title from each themed text set is listed below:

Included in the educator guide is a list of critical questions readers can ask when selecting books. Those questions highlight what makes this particular book stand out. Born on the Water promotes healing from a past that includes unjust suffering; the text conveys hope and the illustrations support imagination; the narrative is a counternarrative to stereotypes, profiling rich African culture and the indomitable spirit of enslaved humans; and above all, the poems portray love in a way that builds community.

Nikole Hannah-Jones is an investigative reporter who spearheaded the 1619 Project with the New York Times to help readers understand the hold of institutional racism on U.S. communities. Pulitzer is the official education partner of the project and resources can be found at the 1619 Project and the Pulitzer Center. More information about Nikole Hannah-Jones can be found on her website.

Renée Watson is the best-selling author of Piecing Me Together (2017). Her poetry and fiction center around identity construction, the intersection of race, class, and gender, and the lived experiences of Black women and girls. More information can be found on her website.

Los Angeles-based Nikkolas Smith describes himself as an ARTivist, concept artist, children’s book author, film illustrator, and movie poster designer. He works to create art that sparks meaningful conversations that lead to change. More information can be found on his website.

WOW Review, Volume XV, Issue 1 by Worlds of Words is licensed under a Creative Commons Attribution-NonCommercial-ShareAlike 4.0 International License. Based on work by Susan Corapi at https://wowlit.org/on-line-publications/review/xv-1/3