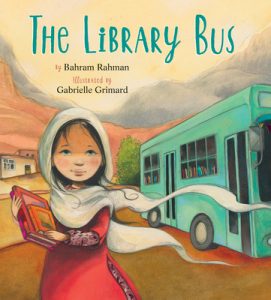 In the darkness, the library bus rumbles out of the city of Kabul, Afghanistan. The library bus is no ordinary bus; it’s the only bus on wheels in all of Kabul. Pari is nervous and excited about her first day as Mama’s library helper. Mama drives the bus to a small village where girls eagerly await to return the books they borrowed and browse for new ones. Mama gathers the girls in a circle to practice English by singing the alphabet song and counting from one to ten. Bwob-b-b… Vroom! and they are off to a refugee camp. On the way, Mama tells Pari that girls were not allowed to go to school when she was young. Pari learns that her grandfather taught her mother to read and write while hiding in the basement. Pari will be starting school next year, and Mama encourages her to study hard and never stop learning, believing that education is freedom. Pari passes out pencils and notebooks at the refugee camp while Mama exchanges books for the girls. Later at home, Pari asks Mama to teach her to read, and Mama tells her she will go to school in the city to learn to read. Mama explains to Pari that there are no schools for the girls in the village or camp and that they only have the library bus, but she will help them as her father helped her. The book ends with Pari in her bed, smiling and hugging her mother while thinking about the girls in the village and camp, the library bus, and the new girls they will meet tomorrow.

Grimard’s illustrations pair well with Rahman’s words to tell an inspiring and realistic story about an Afghan girl and her mother’s effort to expand literacy to young girls in areas where no schools exist. Their commitment to and engagement with helping educate girls is demonstrated throughout the book. The Library Bus shows hope in the love of learning and how people share this hope, even in challenging circumstances. The endnote by the author explains that he wrote this book to show the strength of children in Afghanistan, particularly girls, in the pursuit of education. Rahman wrote, “when you are born in war, you are unaware of the alternative, peace. War is your normal. Life carries on… You get hurt and heal. And you dream. Big dreams like those of every other child.” The author includes more information on refugee camps in the back of the book. This section references the initials printed on the tents in the refugee camps: UNHCR (United Nations High Commissioner for Refugees), one of the organizations supporting displaced people in Afghanistan.

The Library Bus can be paired with Malala’s Magic Pencil, by Malala Yousufzai and Kerascoet (2017), highlighting the power of education and the people in war-torn countries fighting for their children’s education, particularly girls. The Sky-Blue Bench (2021) is Bahram Rahman’s second picturebook about the resolve and resilience of children facing barriers in education. Nasreen’s Secret School, a True Story from Afghanistan, by Jeanette Winter (2009), can be read alongside The Library Bus; young Nasreen is enrolled in a secret school for girls in Afghanistan after her parents disappear and she stops talking. The issues of inequality, the importance of education, and the perseverance of a young girl are highlighted in The Story of Ruby Bridges, by Robert Coles and George Ford (2010).

The author Bahram Rahman was born in Kabul, Afghanistan, and grew up during the Taliban regime and civil war. Rahman obtained a medical degree from Kabul Medical University and a master’s degree in public policy from the University of Erfurt, Germany, while working as an activist in Afghanistan for gender equality. In 2012, Rahman came to Canada as a refugee and is currently a senior policy advisor at the Ministry of Health in Ontario. The Library Bus was his first picturebook. The Library Bus was the winner of the Middle East Book Award, a finalist for the Governor General’s Literary Award, a finalist for the Florida Literary Association Children’s Book Award, a finalist for the OLA Forest of Reading Blue Spruce Award, and Winner of the Northern Lights Book Award: Multicultural Category. In 2021 Rahman wrote The Sky-Blue Bench, 2022 ALA Schneider Family Book Award Honor Book Winner.

Award-winning Canadian illustrator Gabrielle Grimard’s realistic and captivating art transports the reader to Afghanistan. Grimard began her career as a muralist in Ontario, Canada and began illustrating books after the birth of her son. Her compelling characters celebrate the strength of women and girls demanding their right to education. When I Was Eight (2013) and Not My Girl (2014) are two of over 30 books Grimard has illustrated. Lila and the Crow (2018) is her first book where she is author and illustrator.

WOW Review, Volume XV, Issue 1 by Worlds of Words is licensed under a Creative Commons Attribution-NonCommercial-ShareAlike 4.0 International License. Based on work by Michelle Roddy at https://wowlit.org/on-line-publications/review/xv-1/5