The Washington County Public Library (WCPL) teamed with the kindergarten teachers of Leroy High School to plan and implement lessons that would broaden the students’ understandings of global cultures. The Alabama Course of Study objectives for kindergarten social studies state that students should be able to describe ways people celebrate their diverse cultural heritages. The WCPL and kindergarten teachers planned activities to expose students to diverse cultural heritages throughout the year on special holidays observed around the world. Students were exposed to the different cultures through books, crafts, food, and music.

Leroy High School is located in the small rural community of Leroy, Alabama. The school is considered by the federal government to be a low-income school, with nearly 75% of the residents living at or below the poverty level. The 2011-2012 kindergarten class was comprised of 60% White, 30% Black, 8% Native American, and 2% other.

The first activity took place in the Leroy High School kindergarten classrooms in December. The theme of learning about global cultures was introduced through Christmas customs and traditions celebrated around the world. A WCPL staff member read Christmas around the World by Mary Lankford (1998). The students discussed the different traditions described in the book; Sweden (sweet Lussekatt rolls), Holland (wooden shoes that are filled like stockings), Brazil (fireworks), France (yule log), South Korea (fancy cakes), South Africa and Australia (warm weather) and Mexico (the legend of the poinsettia). The students then created a poinsettia ornament to represent the legend of the Mexican traditional holiday plant. All of the students, the classroom teachers, and school library received a copy of Christmas Around the World.

In January, the WCPL visited the kindergarten classes to teach a lesson on the traditions of the Chinese New Year. They began by reading Celebrating Chinese New Year by Diane Hoyt-Goldsmith (1999) and Chinese New Year by David Marx (2002). Students discussed the history, colors, decorations, and traditions explained in the book and created red parade streamers, popped Chinese “firework” poppers, enjoyed fortune cookies, and ate with chopsticks. The teachers and school library received copies of the books.

The celebration of Mardi Gras was chosen to be the focus of the February visit to the kindergarten classrooms. This is a holiday that is quite familiar to the students in this area because of their close proximity to Mobile, Alabama, the birth place of American Mardi Gras. Students learned of the French roots and traditions of the Mardi Gras holiday. A guest reader from Louisiana read the book Gaston Goes to Mardi Gras by James Rice (2000) with an authentic Creole dialect and treated students to authentic King Cake brought from Louisiana. The staff and students dressed up with self-made Mardi Gras masks and conducted their own parade for other grades in their building in which they threw beads, candy, and moon pies. The teachers were given a hardback copy and a coloring book copy of Gaston Goes to Mardi Gras.

In March, WCPL staff visited the school to discuss the history and traditions of Easter celebrations in the US and around the world. The focus of this visit concentrated on teaching the different views of Easter in different cultures. The WCPL staff read the book ‘Twas the Night before Easter by Natasha Wing 1999) and Easter Parade by Lily Karr and Kirsten Richards (2013). The students then heard a story pertaining to the legend of the dogwood tree and the Easter lily. They made an Easter basket that was used in an Easter Egg Hunt located in the yard of the school. As a follow up, students were given Easter-themed coloring pages and fact-filled activity sheets. Each teacher, and the librarian, was given a copy of the two books that were read.

For their visit in April, WCPL staff members were accompanied by the Washington County Native American Education Coordinator and members of the MOWA Band of Choctaw Indians Fancy Dancers. The purpose behind this visit was to teach students about Choctaw Indian and local Native American culture. First, the students listened as the staff read three books to them. The books were Alabama Native Americans by Carole Marsh (2004), North American Indians by Douglas Gorsline (1977), and Powwow by George Ancona (1993). Then, a slide show about Choctaw Indians was presented. Students learned about types of dress, housing, and foods used by the tribe. Members of the tribe demonstrated tribal dances and students had the chance to interact with the Fancy dancers by dancing along. They also taught the students some tribal Choctaw words, showed their own personal handmade accessories, and explained their regalia. At the end of the visit, students were given the opportunity to try different seeds and nuts that are used in traditional Choctaw cooking. Each teacher and the librarian were given a copy of each book that was read aloud.

The last visit to LHS took place during the week of Cinco de Mayo. The WCPL traveled to celebrate Cinco de Mayo with the students. A high school Spanish-speaking student read a bilingual book to the students titled Curious George, Piñata Party, by H.A. Rey (2009). A Spanish-speaking student read the book in Spanish, while a staff member alternated with the English translation of the story. Students then discussed how Cinco de Mayo in Mexico is similar to Independence Day in the United States. Students were shown different types of piñatas, and they were able to discuss ways people enjoy piñatas. As a finale, the children were able to make their own piñata using paper bags, tissue paper, and candy. Students then had the opportunity to try authentic chips and salsa from a local Mexican restaurant. As students ate, the WCPL staff explained how the colors of the Mexican flag are represented in the ingredients used to make salsa. Each student, teacher, and the librarian was given a copy of the book.

These visuals bring alive our experiences in the school and demonstrate the collaborative nature of our project. 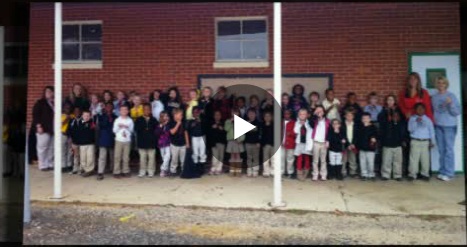 Heather Dantzler, Children’s Coordinator at Washington County Public Library, graduated from the University of Mobile. Prior to working at WCPL, Heather taught preschool students at a local childcare center and also served as an instructor for 21st Century after school programs.

WOW Stories, Volume IV, Issue 6 by Worlds of Words is licensed under a Creative Commons Attribution-NonCommercial-ShareAlike 4.0 International License.
Based on a work at .