As a Reading Specialist, I have the pleasure of collaborating and co-teaching with Grade Six English Language Arts teachers in a suburban middle school of approximately 750 students. My role extends beyond small reading groups due to a flexible academic intervention program, which allows me to support students within a classroom setting as well.

Through the many changes and challenges we face each year, one teacher and I find ways to share topics and books with students that are meaningful and interesting. With this in mind, Toni Corigliano and I welcomed the opportunity we were given when the Grade Six New York State Common Core Learning Standards for English Language Arts and Literacy stated:

Respond to literature by employing knowledge of literary language, textual features, and forms to read and comprehend, reflect upon, and interpret literary texts from a variety of genres and a wide spectrum of American and world cultures.

This allowed students in our class to explore their own families’ backgrounds, enabled us as teachers to utilize a variety of texts, and opened the door to discovering perspectives of people around the world!

Our implementation of what we titled our “War Unit,” which was based on novels about WWII, helped the whole class take on different perspectives of people throughout the world, including but not limited to Denmark, Germany, Japan, Poland, and France. There were several steps to take before reading the novels, which included providing students with knowledge and information they would need in order to understand other perspectives. From there and throughout the unit, all types of texts were referred to and read that supported and strengthened the views and opinions we faced.

Our unit’s central theme, or common thread among texts, was: How do the views and experiences of people around the world support the statement that ‘War is never a good idea’?

This focus point led our discussions and helped students think about who was affected by war, rather than just focusing on the war itself. We not only learned historical information, but also made connections to the importance of this era in today’s society.

This chart lists the tasks and activities we employed throughout the unit, as well as the purpose for each. We were constantly adding, modifying, and changing activities as our discussions evolved and as students presented their thoughts and opinions that guided our purpose.

At the end of the unit, students were asked to reflect on the quote, “After all this is over, all that will have really mattered is how we treated each other.” Students used their knowledge from what they read, their own opinions, and the perspectives of others to write in connection to the quote. (Appendix C)

We shared by having students choose their best/favorite line within their writing and we shared aloud each line as an oral class poem. Below is our poem, which had a powerful impact in class that day. It also met and exceeded the Common Core State Standard, providing evidence that students can read, interpret, and reflect on their own lives as well as the lives of others.

Krista Jiampetti is a Reading Specialist at Lisha Kill Middle School in Albany, NY. She can be contacted at Krista.Jiampetti@southcolonie.k12.ny.us. 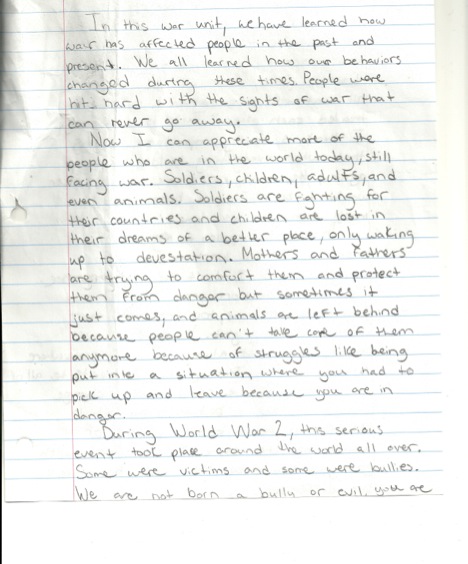 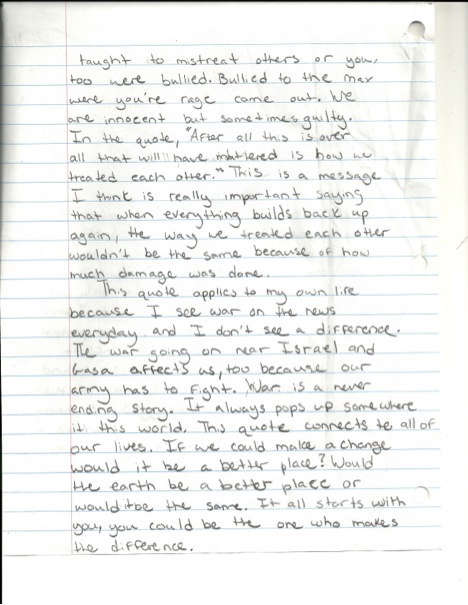 In this war unit, we have learned how war has affected people in the past and present. We all learned how our behaviors changed during these times. People were hit hard with the sights of war that can never go away.

Now I can appreciate more of the people who are in the world today, still facing war. Soldiers, children, adults, and even animals. Soldiers are fighting for their countries and children are lost in their dreams of a better place, only waking up to devastation. Mothers and fathers are trying to comfort them and protect them from danger but sometimes it just comes, and animals are left behind because people can’t take care of them anymore because of struggles like being put in a situation where you had to pick up and leave because you are in danger.

During World War 2, this serious event took place around the world all over. Some were victims and some were bullies. We are not born a bully or evil, you are taught to mistreat each other or you, too were bullied. Bullied to the max, were you’re rage came out. We are innocent but sometimes guilty. In the quote, “After all this is over all that will have mattered is how we treated each other.” This is a message I think is really important saying that when everything builds back up again, the way we treated each other wouldn’t be the same because of how much damage was done.

This quote applies to my own life because I see war on the news every day and I don’t see a difference. The war going on near Israel and Gasa affects us, too because our army has to fight. War is a never ending story. It always pops up somewhere in this world. This quote connects to all of our lives. If we could make a change would it be a better place? Would the earth be a better place or would it be the same. It all starts with you, you could be the one who makes the difference.