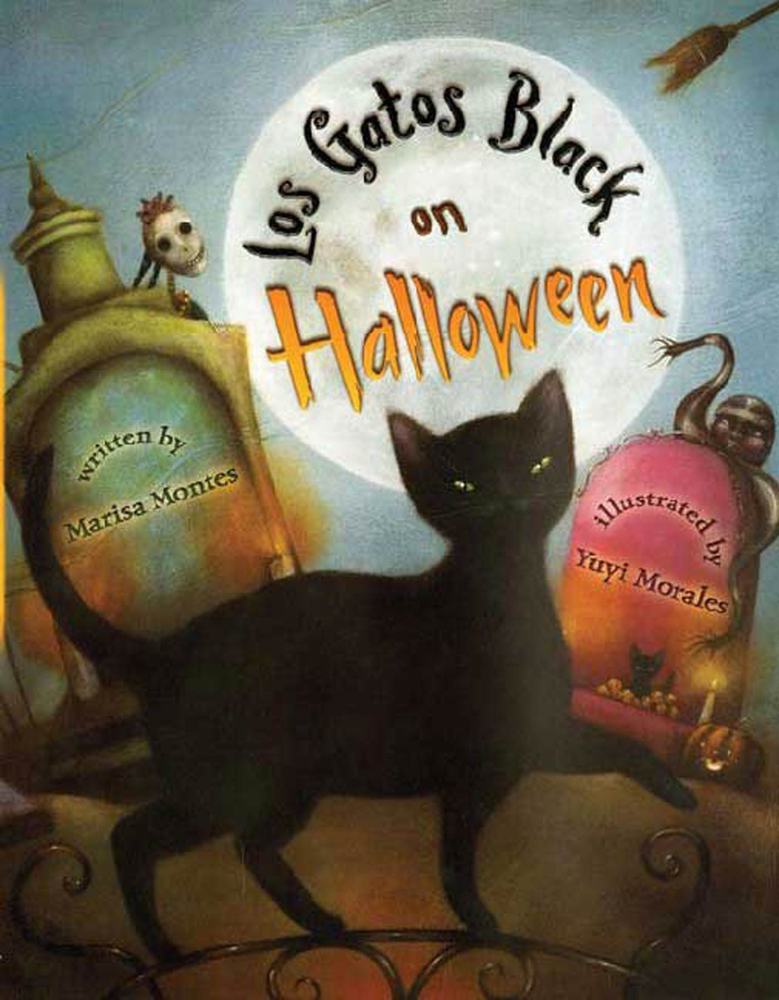 Cats slink and creep on Halloween.

With ojos keen that squint and gleam—

They yowl, they hiss…they sometimes scream.

From Los Gatos Black on Halloween

In last week’s post I shared responses from nine Latina teachers who explored several children’s books that use English/Spanish codeswitching. Most of these teachers grew up with Spanish as either their first language or a major additional language. In addition, they all live in South Texas, where well over half the population speaks Spanish at home and a sizable portion of the community uses a mixture of English and Spanish (variously called Tex-Mex or Spanglish) in daily life. Codeswitching, for many of these teachers, is something that they hear and use every day. On the other hand, codeswitching in literature is not particularly common, though the amount of literature that uses codeswitching is growing. Why do some authors choose to use codeswitching in their writing?

Codeswitching is a purposeful literary device that can serve a number of different purposes. If the author wants to tell a story about a particular group of people, such as Latinos in the borderlands, codeswitching can be a natural and authentic way to establish characters and settings. Codeswitching in literature can also be an expression of identity and group membership, with the author using codeswitching to say, “This is who I am. This is the language I use and value.” In addition to expressing the author’s culture and language, it is also an invitation and connection to the reader. “Are you like me? Do you share my language?” When the text and the reader share language use and culture, it can create a sense of belonging for the reader.

Codeswitching often signals a more casual register and offers the author an opportunity to play with language. Sometimes, too, concepts work better in one language than another. During the class discussion, Chris said she had read aloud a bilingual text to her second graders and noticed that while the text was funny in Spanish, it lost a lot of its humor in English. Codeswitching gives the author the opportunity to use the most appropriate language for whatever the author is trying to express.

Although most authors want to be read widely, codeswitching can also signal the market the author expects and for whom they are writing. Integrating Spanish words and phrases suggests that the book will be marketed toward Latino audiences. Yet, most authors balance a limited use of Spanish with primarily English text so that the book is accessible to monolingual English-speakers who make up the majority of the book-buying public in the United States. At the same time, codeswitching can be a method of resistance to dominant linguistic ideologies that promote monolingualism and assimilation by disrupting conceptions of normal.

There is very little academic research and writing on codeswitching in children’s books. However, if you are interested in this topic you may find these readings interesting:

There is more extensive academic interest in codeswitching in literature for adults. Here are a few articles for further reading:

Many thanks to the students in READ 6325–Chris, Gracia, Anita, Selia, Ida, Mayra, Leslie, Irma, and Paula–for their help with this blog series.