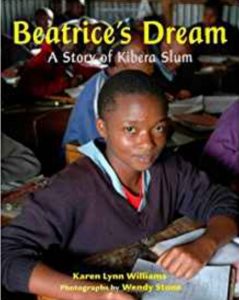 Wendy Stone is a photographer living in Nairobi, Kenya. She contacted me because she wanted to do a series of photo essay picture books for young people about children of the different tribes in Kenya. She knew I had lived in Africa and she was familiar with my book, Galimoto. I wasn’t sure I knew enough about the tribes of Kenya to take on this project but when I saw Wendy’s photographs of children in Kenya, I knew I had to try. Her work, the subjects and professional approach all resonated with me. Just by coincidence I was invited to speak at the American School (for embassy children and children of diplomats from around the world living in Nairobi) as a visiting author for a week. What an opportunity! With what I earned on this visit I was able to stay in Kenya for six weeks to do the research and travel with Wendy. I interviewed members of the Maasai, Kikuyu and Turkana tribes. We traveled to the tiny island of Lamu where we visited with Swahili Muslim children.

While I was in Nairobi I suggested to Wendy that there was a tribe of children we had forgotten-the children living in the slums. Many of them have been orphaned by the AIDS epidemic. They are one step from living on the streets. After living in both Malawi and Haiti where I spent much of my time with children, I felt I knew these kids well, the poorest of the poor often fending for themselves but still with all the dreams and hope and imagination and creativity of children everywhere.

At first Wendy did not think this was a topic that editors would be interested in but I persisted. We identified, through a small NGO working in Kibera slum, a young girl, Beatrice, who spoke English and had a story to tell. Kibera is thought to be one of the largest slums in Africa and perhaps the world. It stretches for miles and miles of shanties and huts made of tin and cardboard and mud. It was made famous for a short time when the movie Constant Gardner came out and featured a few shots of the main characters there in Kibera, not far from the school Beatrice attended.

Beatrice is a soft-spoken, shy girl but when I told her our plan and showed her some books that were like the one we had in mind, she agreed to be interviewed and to let me follow her and to show me her life in Kibera. I sat in class with Beatrice, observed her on the playground and followed her to and from school. Wendy took photos and later went back to visit Beatrice for more photos.

Out of all the books we proposed, Beatrice is the story that finally sold to a publisher.

There were some problems as the book was going to press when riots over the last election broke out in Kibera and across Kenya. Our publisher required new press releases signed by Beatrice in the event that her situation might have changed with the riots. But Beatrice had disappeared and none of our contacts knew where to find her. Finally Wendy put an ad in the Nairobi newspaper and sure enough someone contacted us with the news that Beatrice was studying in a girls’ school there. Wendy was finally able to contact her and get the new permissions form signed.

Beatrice has now graduated from high school and is taking courses at a culinary institute. Although her dream was to go to nursing school where she could learn to help others who are ill like her mother had been, it is very competitive to get into nursing school. Beatrice is very happy with her new dream where she hopes to use her ability with English to work in the service industry.

I am currently working on a Young Adult novel with the working title, Dreaming Tyson, based on the research I did in Kibera. It is a book I have wanted to write for a long time. While I was in Kibera I was able to interview people to make sure that the plot might work. Here’s an example of some of the interview questions and the answers.

“What would happen if there was a fire here?”

“Madam, the fire engines cannot get into these narrow alleys to put it out. Tin burns very hot and quickly.”

“Do they “steal” electricity with flimsy wires in the slums of Kenya the way they do in Haiti?”

I visited the round about where street children live where my main character ends up for a time. I also confirmed details about life in jail for these children.

It was a joy for me to get to know Beatrice and an honor to be able to have an inside look into her life and I am grateful for her willingness to share. It is humbling for me to witness the way Beatrice and other young people like her face the difficulties of life with grace and humility and pride.

For more information about this book and my other books based on my experiences living in other cultures see my website.