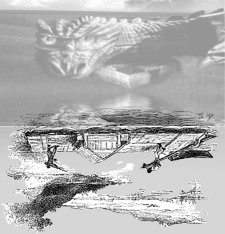 As the purpose of World of Words is to “to build bridges across global cultures through children’s and adolescent literature,” I would like to use this month’s WOW Currents to employ adolescent literature from the United Kingdom as a way to examine the similarities and differences of cultures from two different countries that share the same language (although the English may not agree about the “same language” assertion).

Having recently relocated to England, I deal with the odd feeling of being culturally so close and yet so far, and I am using kidlit as an entrée into the culture much like we want our teachers and students to do in the classroom.

As luck would have it “The Atlantic” published an article today by Colleen Gillard entitled “Why the British Tell Better Children’s Stories.” The article describes British kidlit as by and large fantastical and ascribes this to the Island’s closeness to their pagan folklore. This kind of story, with the Harry Potter series as a prime example, is more appealing to children’s aesthetics. American texts for children are based more in reality and require a clear cut moral message, which could be a leftover from our puritanical roots that eschewed magic and worried about saving children’s souls from their state of original sin.

Or the differences may lie in our two cultures sense of humor, “…the difference between the countries may be that Americans ‘lack the kind of ironic humor needed for questioning the reliability of reality’ — very different from the wry, self-deprecating humor of the British. Which means American tales can come off a bit ‘preachy’ to British ears.”

Indeed. And British tales may come off as a bit amoral and mythological for American tastes. A song for Ella Grey could be characterized by those adjectives. It is a tale of young and doomed love told from the perspective of the Juliet figure, Ella’s best friend, Clare, who promises the reader to “tell it fast and true to get it gone, right now, while darkness deepens over the icy North and the bitter stars shine down” (p. 3).

And she does just that and doesn’t leave out the British magic and sense of place nor does she spare her audience the dirt of folklore. But more than that, Clare creates a space in which art and love are the goals of youth and a place where the ancient legend of Orpheus and Eurydice is replayed in the here and now. What Clare (and David Almond) does best is to show adolescence as a fantastical time, not brought on by developmental psychology’s ideas of being a teenager as being full of angst, but as a time of wonder with madness being a close synonym. “[B]eing young is like being mad. Maybe just being human, at any age, is a bit like being mad. But maybe the best things that we do, and the best things that we are, come from madness” (p. 51).

Madness, in the British sense of “crazy,” allows the youth in this novel to believe in the impossible and to accept the consequences of this belief. There is no moral lesson to be gained by allowing ancient legends to be relived. There is only art and love to be experienced. And those of us familiar with the story of Orpheus and Eurydice need not wait for a happy, resolved ending. As the old stories never give us that kind of “closure.”

I think that the lack of irony in the American soul can be seen as unimaginative or it can be discussed in terms of valuing sincerity and honesty, in life and in our stories. The reader will not get either of those attributes from David Almond. Nor will our American love of heroes be fulfilled as the story is about the failure of love to sustain us and the characters are, in some ways, failures.

By reading this novel, this expat got a small snippet of a different culture in the same language, and I look forward to learning more in the coming weeks.