Think back to some of your earliest memories of wishing, perhaps when blowing out birthday candles, wishing upon a star — particularly a shooting star or the first star of the night, throwing a penny in a wishing well or fountain, getting the long end of the wishbone, blowing on a dandelion puff, or maybe writing a wish on a piece of paper and tying it to a tree or hiding it under a rock.

Childhoods are built upon the world-wide traditions of wishing, and this month’s blog will feature novels and picturebooks that look at the magical thinking of wishing. Woolley, Phelps, Davis, and Mandell (1999) write, “just wanting something does not cause it to appear; we have to undertake some physical action (whether it be going and getting it ourselves or simply asking someone to get it for us) in service of obtaining it” (p. 571). They go on to say that children as young as two years of age “understand that if people want something they will try to get it” (p. 571); and 4 year olds understand that “simply imagining something cannot directly produce an effect in the physical world (p. 572). Despite this understanding, children “have a rich set of magical beliefs,” most likely “embedded in folklore” (p. 573). 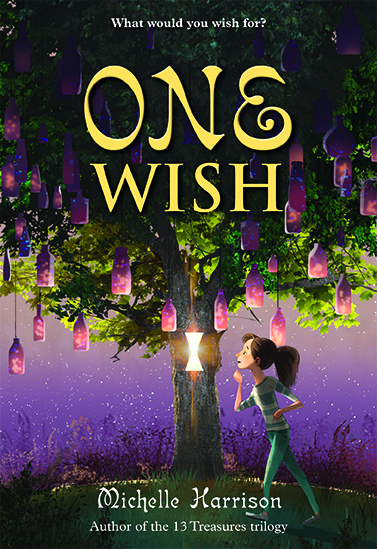 Michelle Harrison returns once more to the divide between the human world and the fey world with the prequel to the 13 Treasures series. 12-year-old Tanya and her mother arrive at the seaside for a vacation on the heels of her parents’ divorce. From the moment they arrive at the cottage, she “sensed there was something wrong” (p. 5); with her “second sight,” it does not take her long to discover the malevolent fairy living under the floorboards. Soon after, Tanya and her dog Oberon go for a walk where she discovers a tree.

“It loomed above her, almost as wide as it was tall. Its trunk was thick, gnarled, and knotted. It looked very, very old… Glass bottles and jars, in the dozens — no, hundreds — hung from the branches above. They were all shapes and sizes, and every color she could think of. Most were colored glass, but some were plain or had been painted. Each one contained something. She reached for one of the lower-hanging ones, a small, teardrop bottle of pale blue. Inside, rolled tightly and bound with string, was a piece of paper with something written on it…. The knots in the gnarled tree trunk twisted and rearranged themselves. Two of the knots opened…and blinked. Below them, a third knot puckered before opening in an enormous yawn… ‘One wish, what’ll it be?’ it said. ‘For you have found the Wishing Tree’” (pp. 16-17).

We have all made wishes and have given a great deal of thought to those wishes. Some of us have asked for health, friendship, love, happiness, maybe even wealth. Tanya knew from fairy tales that she must be very careful of her wish — should she wish for her dad to come back? For her parents to be in love again? Just as she is about to make her wish, she spots a boy in the tree, trying to hang his wish bottle — someone who must also have second sight since he is talking with the tree, too. Upon seeing her, he runs away, leaving his bottle behind. Tanya decides she must find him and return his wish.

“Ratty,” the boy Tanya sees, does have second sight and a personal guardian fairy named Turpin. Ratty soon finds himself in terrible danger and Tanya decides she must use her one wish to save him. In making the choice to help Ratty with her one wish, Tanya lets go of her personal wish to reunite her parents; and in the process, she reveals her strong character, sense of loyalty, and determination to do right by her friend.

With the original book in the series, 13 Treasures, readers meet 13-year-old Tanya Fairchild. Tanya has the ability to see fairies, and these fairy folk have caused havoc and mayhem throughout Tanya’s young life. The blame for the mischief they create falls on her. Tanya’s mother, who cannot see the fairies, is so perturbed at her daughter’s behavior that she sends Tanya to her grandmother’s — a home with many secrets — for the summer. Along with Fabian, the groundskeeper’s son, and Red, who also has the “second sight”, Tanya discovers an old photograph, enters into the forbidden woods, finds herself in the fairy realm, unravels the mysterious disappearance of children, and learns the significance of a bracelet with 13 charms. Publisher Weekly and School Library Journal gave 13 Treasures a starred review, and readers embraced first-time novelist Michelle Harrison.

The second book in the series, 13 Curses, described by Kirkus Reviews as “an absorbing sequel… by turns violent and tender, sinister and poignant,” picks up where the first ended. Red is now the focus, and her baby brother had been kidnapped by the fairies. She vowed to find him. She makes a bargain with the fairy court wherein she must find the scattered 13 charms; but there is a twist, the treasures are now cursed. Red, a gritty and tough girl to be admired, will absolutely not give up even though the fairy court has no intention of allowing her to succeed.

Voice of Youth Advocates (VOYA) Magazine described the third book in the series, 13 Secrets, as “a page-turning mystery.” Rowan (Red) is now living at Elvesden Manor, the home of Tanya’s grandmother; she attends high school with Fabian and tries to leave her painful past behind her. Tanya returns for the summer and the three find themselves pulled back into matters of the fairy world where they must deal with the secrets of the past and the present.