September is the American Library Association’s Office for Intellectual Freedom’s “Banned Books” month, when we celebrate books that at one time or another have been challenged and/or censored. These books are often removed from the shelves of school and public libraries because an individual or organization found them to be politically, morally or religiously offensive and problematic. This year, Banned Book Week runs from September 24-30, which coincides with a special exhibit at Worlds of Words–Hello, Dear Enemy! 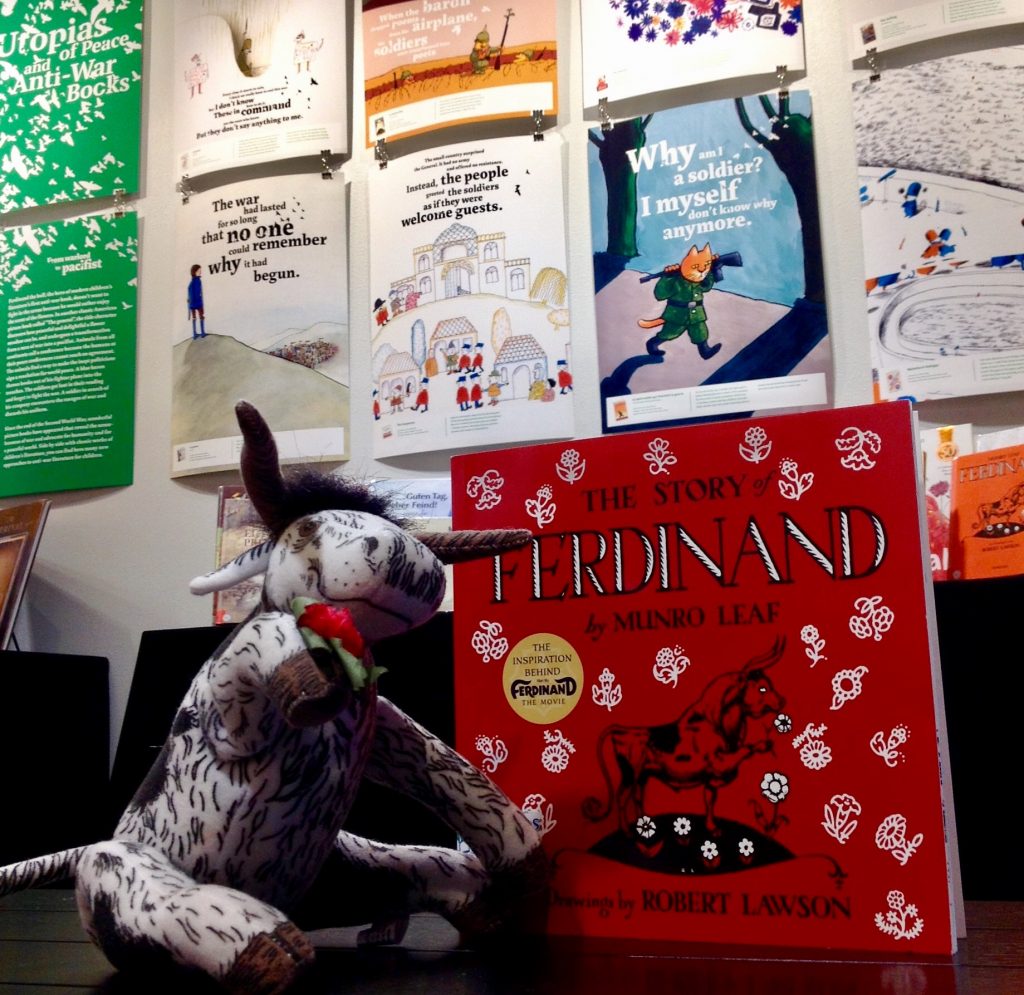 This traveling exhibit makes its first stop at WOW all the way from Germany! Guests are welcome to read, browse and engage with international titles that focus on war, peace and conflict. In the exhibit, children and adults can engage in conversations surrounding the critical, often disturbing issues that they confront through the media or personal experiences. The International Youth Library in Munich, Germany created the exhibit and presents an international collection of children’s and adolescent literature centered around four main themes: Experiences of War, Destruction and Displacement; Power Struggles and the Origin and Escalation of Violence and Prejudice; Ostracism and Imagined Enemies; and Utopias of Peace and Anti-War Books. In honor of Banned Books Week, I explore a book from the Hello, Dear Enemy! exhibit with a history of censorship: The Story of Ferdinand (1936, Leaf M. & Lawson, R., Illus.).

Yes, you read that right. The Story of Ferdinand–the cherished picture book about the bull who can’t bring himself to fight, preferring instead to smell the flowers. Happily, our favorite bull is eventually pardoned from bullfighting because of his tender nature. Many cite The Story of Ferdinand as the exemplar story of passivism and being true to one’s self, of peace over violence. The book has been subject to wide acclaim around the world, but it wasn’t always that way.

Ferdinand is so endearing that it has become a mainstay of pop culture in the United States. It appears across multiple forms of media, including in the Academy Award-winning film The Blind Side. Sandra Bullock, playing the role of Leigh Anne Tuohy, reads the story to her children, including her adopted son, NFL offensive lineman Michael Oher. Michael struggles to realize his football acumen and Leigh Anne sweetly compares him to “Ferdinand the Bull,” an intimidating but gentle giant. However, few people know the highly-charged history of the book, including symbolic illustrations that enraged world leaders. Several countries banned and even burned Ferdinand.

Leaf and Lawson published Ferdinand in September of 1936, just two months after the outbreak of the Spanish Civil War. The book was interpreted as a critique of fascism as tensions between nationalist and democratic governments were on the rise. An example of these competing ideologies was played out in Spain, when General Francisco Franco led a military coup that overthrew the elected republican government. After a violent 3-year war against Spanish loyalists, Franco gained support from other fascist regimes like Hitler’s Germany and Mussolini’s Italy. With their help, Franco eventually became the dictator of Spain. Madrid fell to Franco’s Nationalists after he ordered the bombing of his own citizens. German planes and pilots carried out that raid.

Meanwhile, Ferdinand the Bull enjoyed high acclaim in the United States. It out-sold the mega-smash hit novel, Gone with the Wind! Many Americans were sympathetic to the Spanish loyalists’ cause, inciting demonstrations of support across the country. The book’s message of peace resonated in the U.S. However, it did not resonate with everyone. Adolf Hitler and Francisco Franco viewed the book as dangerous pacifist propaganda, leading to its ban in Spain and burning in Germany.

What is it about this sweet story about a gentle bull that incited so much controversy? Within the historical context, the artwork blatantly portrays the ugly truth behind the fascist political ambitions of the time. These symbols are replete throughout the book. The bull itself is a representative symbol of Spain and its culture. Additionally, the poster of “El Toro Feroz FERDINAND” (The Ferocious Bull FERDINAND) looks similar to the propaganda posters used by both sides of the conflict. The symbols are abundant throughout the text’s illustrations and seem intentional, though both Leaf and Lawson denied these allegations.

However, upon close analysis of the images, that denial is hard to believe. Take, for example, the reoccurring image of vultures. Vultures appear six times in the text, without a single reference to them in the written narrative. The presence of the vultures implies that something dark is watching, waiting for opportunity to attack. Furthermore, the vultures link directly to Hitler’s Germany and Mussolini’s Italy, who supported Franco’s military coup. They helped to create a group called The Condor Legion, who carried out bombings of Spanish citizens under Franco’s orders.

By themselves, the vultures symbolize evil, death and danger, but “put the animal in Nazi pilot gear and a fascist rebel uniform, and this becomes the symbol of the ultimate villain that must be vanquished” (Villanueva, 2009, 9). The vultures are only one example of the symbolism present in the illustrations–there’s more to find! For further analysis, I recommend “The Story of Ferdinand: The Implication of a Peaceful Bull” by Gabriela Villanueva (2009).

The Story of Ferdinand is an excellent picture book for children and deserves its popularity. It presents enduring messages that, when read and reread, reveal new ideas. It reminds us that stories can inspire inquiries by connecting us to the past and providing insight into the present. This book drives home the notion that literacy and language are inherently political–even stories about peaceful bulls who like to smell the flowers.

Despite political backlash and condemnation, Ferdinand remains a mainstay in children’s literature. If you attend the Hello, Dear Enemy! exhibit, you are invited to leave a flower in Ferdinand’s Happiness Pasture with a message of joy or a promise to make the world more beautiful and continue Ferdinand’s legacy. Join us as we celebrate Ferdinand and dozens of other amazing books in this stunning exhibition!

Villanueva, Gabriela, “The Story of Ferdinand: The Implication of a Peaceful Bull” (2009). ECLS Student Scholarship. http://scholar.oxy.edu/