Ready for the next description of peace based on the book Peace Begins with You by Katherine Scholes and Robert Ingpen? The fourth way they describe peace involves the choices that we all make that either threaten or support peace. Scholes and Ingpen go on to say, “working for peace may be harder than using force. You may have to be braver and stronger. You may have to learn new skills, new ways of thinking and planning.” The focus this week is on characters whose choices threaten or support peace. For many of the characters, that involves a shift in perspective. 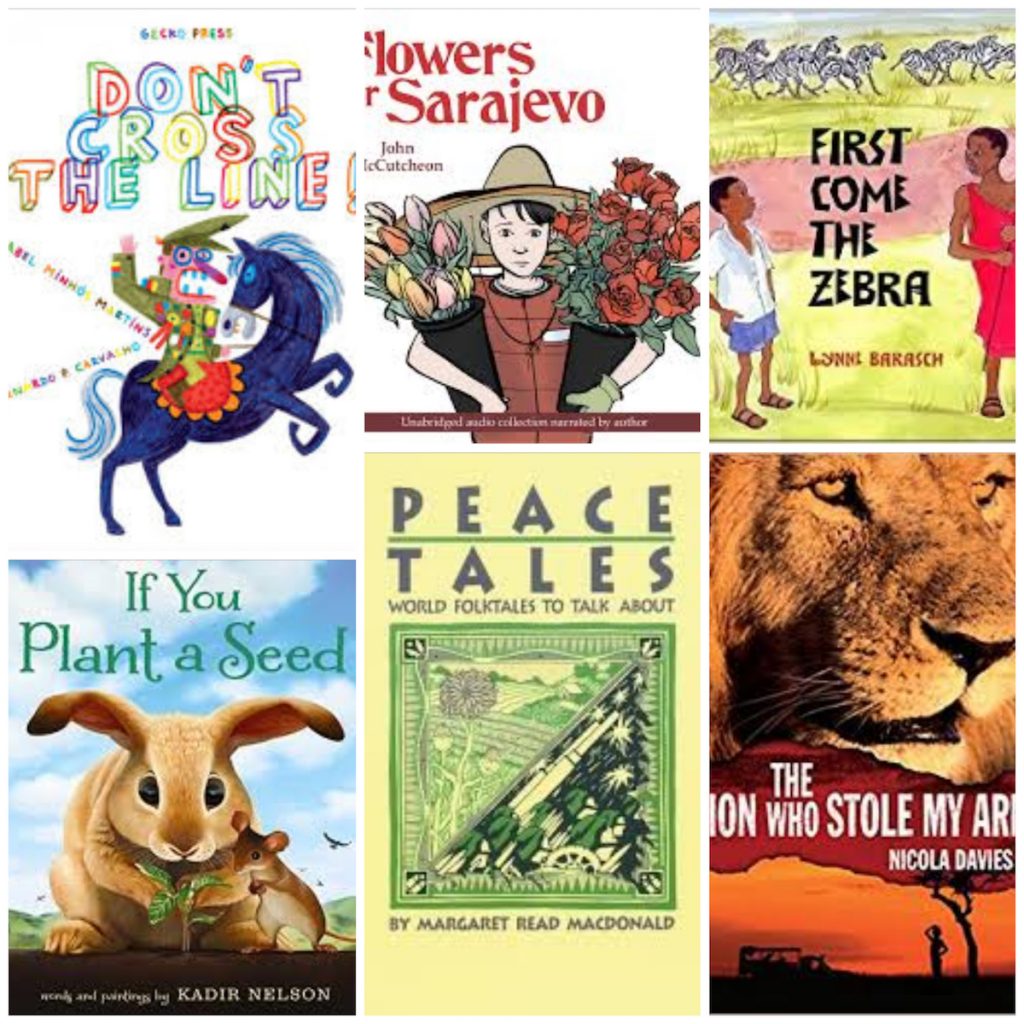 Short Term Decisions that Impact Peace In the Long Run
The Lion Who Stole My Arm by Nicola Davies, illustrated by Annabel Wright
Based on a true story set in Mozambique, zoologist Nicola Davies describes the life-threatening drama between humans and lions. Pedru’s village uses a fence to protect villagers and livestock from the large cats, but each year some villagers and animals are lost. One day Pedru walks off alone to check his snares only to be attacked by a young lion. Fortunately the lion is still learning to hunt, and he only loses an arm to the hungry cat. Pedru’s father, a skilled lion hunter, knows that once a lion tastes human flesh he will return for more. Killing the lion is necessary for future safety. But before that happens, Pedru meets members of a lion research team who name and implant lions to watch their movement. Pedru makes the choice to help the researchers find Anjani, the lion who attacked him, so the transmitter can give early warnings of the cat’s proximity to a village. The choice to find a way to live in peace rather than follow the tradition of killing lions saves the lives of villagers and livestock in a way that protects an endangered species. An ecological cycle is kept in balance.

This book in Davies’ series about protecting endangered species pairs well with Tiger Boy by Mitali Perkins. Neel and his sister work against skilled trackers to protect a rare tiger cub that escapes the tiger reserve in the Sunderbans forest in West Bengal, India. Neel saves the cub and realizes in the process that winning a scholarship and temporarily leaving his beloved forest may help protect the wildlife and environment of his home in the long run.

If You Plant a Seed by Kadir Nelson
Kadir Nelson is known for his oil paintings that give richness and depth to stories through perspective, shadows and the size of the subjects. In this fable-like book about contrasting planting seeds of kindness with seeds of selfishness, the animals learn the consequences of each kind of seed. While it sounds simple, the depth of the color, the size of the animals and the cinematic perspectives the reader sees the characters with makes the story of strife and reconciliation come alive in a new way.

Immediate Decisions that Create Peace
First Come the Zebra by Lynne Barasch
Abaani is Maasai and herds his family’s cattle. Haki is Kikuyu and sells the produce his family grows. The historic animosity between the nomadic cattle-herding Maasai and the farming Kikuyu plays out in the relationship between the two boys. Initially mistrusting of each other, the boys choose to work together to save a toddler from dangerous warthogs and discover along the way that each is likable. Their ability to work cooperatively at saving a child helps them realize that their families can do more than coexist in tension–they can live in peace and respect both ways of life.

Peace Tales by Margaret Read MacDonald
Margaret Read McDonald is known as an author, collector and especially a teller of stories. One of her collections, Peace Tales, contains over three dozen stories and proverbs that illustrate choices promoting conflict or peace. One I use frequently in the classroom is the story of conflict between two goats. The conflict is told in two versions, one that intensifies conflict and another that promotes peace. Each story begins the same way: two goats meet on a bridge that is only comfortably wide enough for a single goat. In the first version the goats brag and butt their heads, refusing to back down. Both goats end up pushing each other off the bridge, falling into the river below and blaming the other’s stubbornness for the accident. In the second version they do what Scholes and Ingpen suggest: they find a new way of thinking and operating. They carefully work together to squeeze by each other, both leaving the bridge thinking the other goat was wonderfully cooperative.

Protests for Peace
Flowers for Sarajevo by John McCutcheon
Drasko has always lived in Sarajevo, but his life radically changes in 1992 when the city siege begins. Over the years he has helped his father operate his flower stall business, watching as his father offers flowers to Serbs and Croates, Muslims and Christians, looking beyond ethnicity or beliefs to the goodness in each person’s heart. However, when his father has to leave to join the fight, Drasko takes over the business. The flower stall is close to a marketplace but the buying and selling is shattered when a bomb falls on a bakery, killing 22 people waiting in line for bread. In the days following the bomb blast, Drasko watches as a cellist with the Opera Orchestra sits in the marketplace ruins playing beautiful music for 22 days straight, one day for each person who died. This act of protest inspires Drasko to follow in his father’s footsteps and begin handing out flowers to people who could use the encouragement.

Based on true events, Flowers for Sarajevo is a child’s account of the extraordinary protest by Vedran Smailovic, a cellist with the Sarajevo Opera Orchestra who sat in ruins and played Albinoni’s Adagio in G Minor for 22 days. The courageous cellist also played at many funerals in spite of the danger of snipers.

Don’t Cross the Line! by Isabel Minhos Martins and Bernardo P. Carvalho, translated by Daniel Hahn
This book is visually rich! A soldier stands guard over the gutter of the book, keeping a young man and a dog from crossing over from the left page to the right page. He explains that his General reserves the right to keep the right page blank. As the threesome are joined by more and more characters wanting to cross the gutter, tensions rise for both the soldier and the pedestrians. It doesn’t matter that the soldier explains he is just obeying orders. Emotions begin to run high as people miss meetings, begin to feel claustrophobic and get knocked over. The story takes a turn when a boy kicks a red ball over to the right page and nothing happens. The soldier then lets people across which begins a flood of humanity crossing to the right page. When the general arrives on the scene with military backup, he demands that the soldier be arrested. The citizens protest—that gives all the soldiers permission to disobey, leaving the general alone on the left page.

Next week in the final post in this series, I look at the UN Declaration of Rights of the Child. This is a document designed to promote a sense of peace because it is meant to ensure that children have what they need.