By Lacey Nehls, University of Arizona 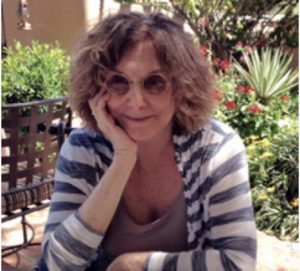 Photojournalist and award-winning author and photographer Susan Kuklin builds quite the rapport with her audience. As a nonfiction author and photographer of books that feature sociocultural issues, Kuklin breaks waves by using real people and real stories. Her newest book, We Are Here to Stay, follows the tremendous journey of nine inspiring young adults who live in the United States undocumented. We Are Here to Stay was originally set for publication in 2017, but the repeal of DACA made it no longer safe to feature these individuals by images or names. Accordingly their identifying information is withheld.

With such a heavy political climate surrounding immigration, We Are Here to Stay opens a new gate to the complexity of immigration. These honest stories break down the dangerous rhetoric and fear-mongering tactics that are used to promote an anti-immigration agenda. As the granddaughter of immigrants, Kuklin has always been interested in the subject. However, the idea to write about immigration came after speaking with an old friend, a law professor, who happens to be an expert on immigration and refugee law. After a long night of discussion, Kuklin realized that people come to America for the same reasons her grandparents did. She says, “They came because they wanted an education for themselves and their future children…. The DREAMers, however, came to America as children. It was not their decision to make the journey.” This notion captivates Kuklin and ultimately led to creation of the book and its compelling theme.

The first two chapters revolve around a strong, brave woman, Y-, and her siblings, who were all born in Medellín, Colombia. The story, like all stories featured in We Are Here to Stay, is written in first person as a way to directly involve the reader with the participants’ experiences. Susan says, “This form of writing leads to an intimacy between the individual and the reader that might not otherwise occur.” Thus, telling stories from the point-of-view of the young, undocumented immigrants assists in effectively capturing their stories. When readers become exposed to these realities, misunderstandings and stereotypes dissolve. In fact, the reality of these people’s lives is far from what is seen or heard on mainstream media outlets or the negative implications made by President Donald Trump. Y- says, “On the news you hear about “the illegals,” and about all the resources they take from Americans” (p. 22). However, Y- makes it a point to explain to readers that this is not at all the case. She continues, “We want to be an accepted part of society. Why don’t you allow us to be part of society? We want to contribute” (p. 22).

Stories like Y-‘s must be told because they debunk the fallacies surrounding immigration. With all of the misinformation circulating about undocumented immigrants, specifically DREAMers, it is crucial that these stories, real stories, are told. Kuklin explains that DREAMers “have been used and abused for political ends.” In fact, Y- recalls a time when she and about two hundred other students, all undocumented, sat in the Senators Chamber to watch the Dream Act be voted on in 2010. She remembers the vicious remarks that some senators said in opposition of the bill such as, “These people are criminals” or “They are illegal” (p. 31). Yet Y- and the other students sat defenseless with nothing more than the hopes that they, too, could accomplish their dreams through citizenship. We Are Here to Stay debunks some of these misrepresentations. 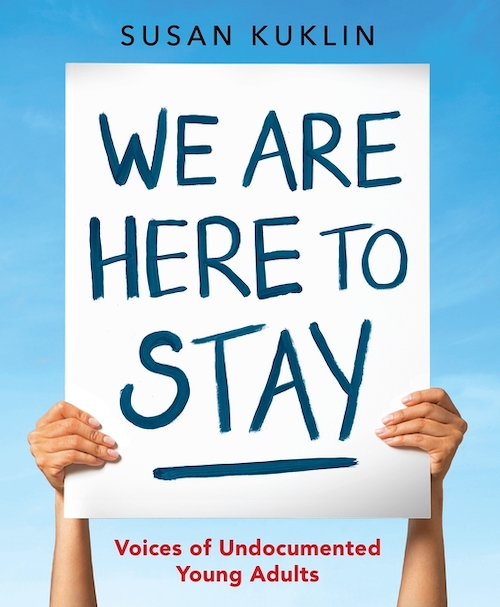 Kuklin enthusiastically says that “Everyone! Everyone! Everyone!” should hear these amazing stories and spread the word. If more people learned the truth of young, undocumented immigrants, perhaps there would not be such stigmatization around the subject. We Are Here to Stay is one way to become more educated on this topic as it gives a glimpse into the reality of so many people. One hopes these stories will promote open-mindedness and build empathy. These courageous young people are an integral part of our loving and functioning society. Rather than feeding into the hate and intolerable ideologies of the current political climate, these stories provide a revelatory experience and show the truth behind immigration.

However, many of the strong emotions that one may experience while reading We Are Here to Stay stem from the lack of identification of the participants. Having them remain faceless and nameless in a photographic narrative adds power and suspense to their stories. Critically, it reinforces an underlying theme of invisibility as many of these young people have lived some part of their lives in secret or hidden. After the 2017 repeal of DACA, Kuklin felt it was no longer safe to display identifying information. She explains, “That would mean that the DREAMers would no longer be protected from deportation.” Therefore, any identifying participant information is concealed and the story is published with blank white pages in place of the DREAMers pictures.

Although, it was the very people whose pictures and names are excluded from their stories that guided Ms. Kuklin’s reporting, every person included in each chapter plays a crucial role in We Are Here to Stay. Their voices contribute to a narrative that portrays accurately and authentically with regards to immigration. Though she conducted first-person interviews, Kuklin continued her research by asking experts in law and immigration to read the text for accuracy. The stories are all genuine and factual in order to present a truthful description. In turn, We Are Here to Stay can be used as a tool to guide young people and give them a larger perspective about the diverse world around them.

Visiting the young people who read Kuklin’s books is an essential part of her role as an author. Kuklin prioritizes school visits as a way to share what she has learned and to get something in return. “They give me hope. They give me courage,” she says. The enthusiasm and appraisals of the students are taken seriously by Kuklin. We Are Here to Stay promotes conversations within the classroom so that students of all backgrounds can feel safe and accepted. In addition, letting students know that they are not alone in certain situations creates an environment that works to de-stigmatize immigration and cultural differences. Kuklin explains that school visits facilitate a safe space and are “a place where people can say what’s in their heart.” Regardless of a student’s background, We Are Here to Stay benefits students as it works to establish a real connection between readers and stories.

Building relationships between readers and the stories promotes critical thinking and conversations about issues found in the narrative. Kuklin explains that the most successful school visits take place when students have read the book. This allows for more thoughtful conversations to form about the research, writing and photography in her work. In addition, Kuklin explains how individual experiences are used “as a springboard to a broader, deeper conversation about questions of immigration, family and social values, justice, etc.” These conversations introduce global perspectives to readers and encourages thought-provoking, passionate conversations. We Are Here to Stay can be used to start a conversation about the diverse world around us.

Leading deep conversations is imperative because it engages the students. However, when directing profound conversations, Kuklin reveals that it is best to “learn by asking a perplexing question and listening to the answer.” Creating a warm and welcoming environment can invite students who may initially be uncomfortable speaking about personal views feel safe and respected. It could also encourage them to reexamine their positions and facilitate growth. That is the goal of these discussions: to promote diverse thinking and build bridges across cultures.

The highly-anticipated We Are Here to Stay hits shelves January 8, 2019. Kuklin is the Stonewall Honor-Winning author of Beyond Magenta. Don’t miss an opportunity to hear from her, as she will attend the Tucson Festival of Books in March 2019.