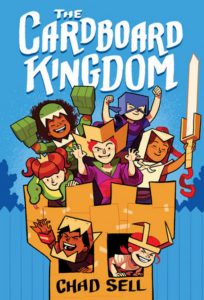 As the summer ends, 16 neighborhood kids create an imaginative world called the Cardboard Kingdom. In the Kingdom, children transform into anything they want to be such as sorceresses, robots, monsters and knights. They create unique cardboard costumes for themselves. Transforming into such characters is cool and fun to them. It also gives them confidence and makes them feel powerful. The transformations and new roles give the children the confidence to face the real conflicts in their lives.

Sophie wants to be the Banshee Monster, but she is troubled because her grandmother thinks that it doesn’t fit her gender role. Sophie becomes upset when she is told to behave like a nice, quiet girl. Sophie finds that she is happy being loud and Hulk-like as the Banshee Monster. A boy plays the character called Professor Everything. He is knowledgeable and willing to share his knowledge with other Kingdom kids but does not get along with them. His journey of finding friends in the Kingdom is difficult, but he eventually finds a good friend. Their common interest, reading comic books, bridges their friendship.

In the author’s note, Sell recalls his childhood memory of living in a neighborhood much like the Cardboard Kingdom. I felt some childhood nostalgia while reading this graphic novel. I used to play imaginative games with my siblings, cousins and neighborhood friends in my hometown in Japan. Perhaps many readers can find similar childhood experiences. Readers will be inspired to craft their own Cardboard Kingdom. Go to the Sell’s website to find papercraft designs of the Kingdom characters and make them at home! -Recommended by Junko Sakoi, Tucson Unified School District.