Over the last 4 blog posts, we looked at OIB titles that model different characteristics of an interculturally competent person. This week we look at the desired outcome: actions that benefit all (not just the cultural majority or the people in power) and support lasting change. Children can be amazing agents for change, and the titles this week demonstrate the ways characters take action.

Our natural tendency when we look for change agents is to look at heroes. A 2019 OIB title that fits that “hero” category is Peace and Me, written by Ali Winter, illustrated by Mickael El Fathi. The book profiles many Nobel Peace Prize winners. Some are expected (e.g., Mother Teresa, Malala Yousafzai) but others are less well known (e.g., Jean Henry Dunant, Fridtjof Nansen, Rigoberta Menchu Tum). Each one worked diligently to bring peace in their area of the world. However, this week the focus is more on kids who are not known as heroes and the action that they take, believing that they can have an impact on their world.

A Drop of the Sea by French author Ingrid Chabert and illustrated by Spanish artist Guridi
This books has just two characters–a young boy and his great-grandmother. In A Drop of the Sea, Ali watches as his beloved great-grandmother loses mobility and asks her if all her dreams have been fulfilled. After a long pause she admits that she has always longed to see the sea but can no longer walk the two days it would take to visit the sea. Ali takes off with pail in hand to make the trip in her place, determined to bring back some of the sea. After spending the night nervously under an unfamiliar palm tree, Ali arrives at the sea, collects water and starts the journey back. However he arrives with only a drop in the bucket thanks to the heat of the desert. The great-grandmother still feels the drop with awe and listens to Ali’s description of the sea again and again.

Rendered in wonderful bold caricatures, Ali and his great-grandmother’s love for each other is set against the uncluttered backdrop of the desert and the sea. The story is simple and straightforward: Ali takes action–not one that changes his life profoundly, but one that is meaningful to the both of them, giving his beloved great-grandmother a way to fulfill a girlhood dream.

[Editor Note: A Drop of the Sea is also featured in a January 2019 My Take/Your Take.] 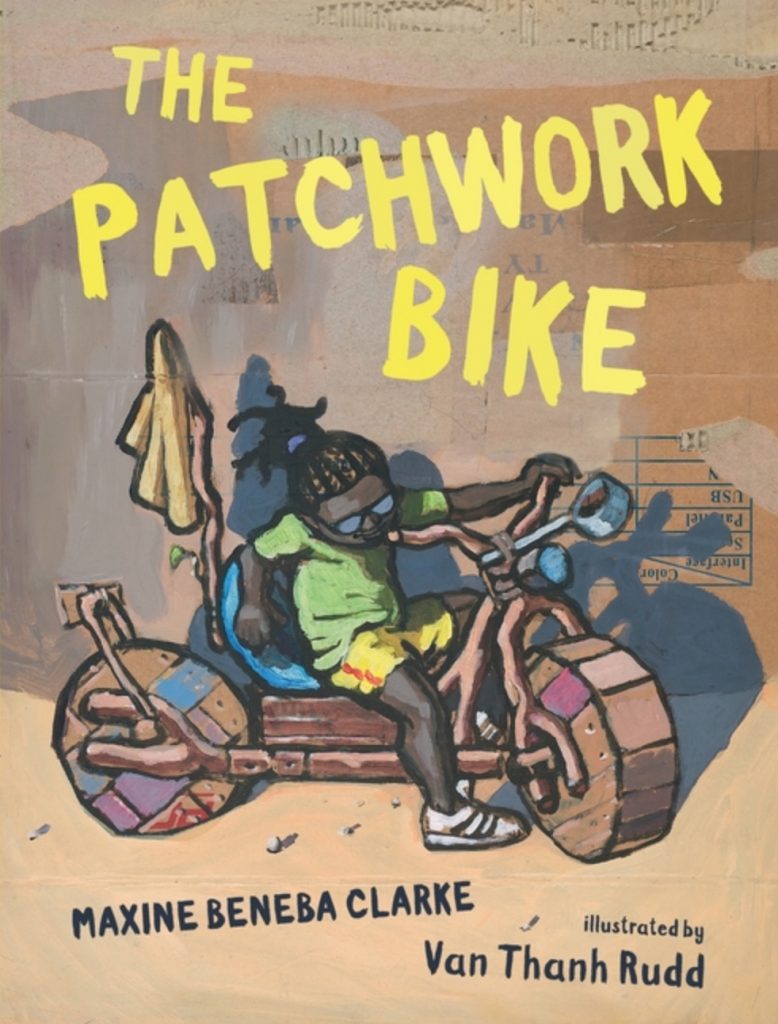 Patchwork Bike by Maxine Beneba Clarke and illustrated by Van Thanh Rudd, both Australian
My husband and I have four sons, so I love the energy in this book—it reminds me of our hectic home when our own kids were young! This lyrical story takes place on the edge of an unnamed desert. Three energetic and creative kids live in a mud-walled home with a fed-up mom. The narrator/sister describes their prize possession: a made-from-scraps bike that they ride in the streets (and through their house—making their mom even more fed up).

This book is unique–there is no rising and descending plot. Everything about the words and art focuses on the energy of the kids and the creative actions they take to have fun, including building a bike out of a bucket seat, a pot, branches, tin cans and carved wood.

Missing Mike by Canadian author Shari Green
Set in a tinder-dry forested area, this novel-in-verse describes desperate but miss-guided action in the face of extreme danger. Cara lives with her parents, sister and one-eyed dog named Mike in Pine Grove, a town that is on high alert because of the numerous forest fires burning near by. When the family has to quickly evacuate, Mike is not around and does not make it into the car. Once safe in a shelter and later in a shared home, Cara does everything she can think of to try to find Mike. She calls shelters and emails rescue services with no success. Desperate to find Mike, she convinces her sister and the daughter of their host family to take a car and drive into the evacuated zone to look for Mike. Unsuccessful, Cara learns the hard emotional lesson of what actions can be taken that do not endanger others.

Africville by Canadian author Shauntay Grant and Canadian illustrator Eva Campbell
The story of Africville provides examples of miss-guided and redemptive actions. Africville was a thriving Black community in Halifax, Nova Scotia. As Halifax grew the land became desirable and, in the 1960s, the residents were forced to relocate and the homes were razed, destroying the place but not the sense of community. In 1983, residents returned to the shoreline site to hold the first Africville reunion. Since then, the site has become a National Historic Site of Canada, and the home of an annual festival. In an effort to acknowledge that painful story and apologize to those who had lived in that thriving town, the Canadian government compensated the residents and built a replica of the town church which now houses a museum. This poem celebrates Africville’s past and present by chronicling the thoughts of a young girl who reflects on the history of her family and friends.

The titles above profile actions that are easily observable. Several 2019 OIB titles deal with the inner and often hidden world of emotions and the actions characters take in order to deal with those strong emotions. 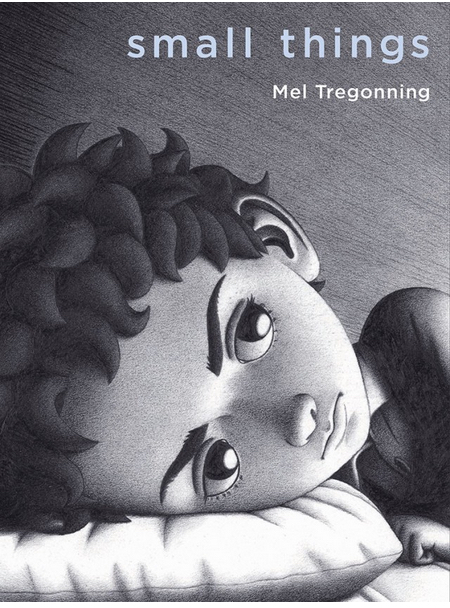 small things by Australian graphic artist Mel Tregonning
In small things, Mel Tregonning drew some of her own story of struggling with depression. In her visual narrative, the boy struggles with his feelings of anxiety in school. The negative emotions are pictured as little winged monsters. As the boy becomes increasingly anxious, parts of his body are missing as the little monsters eat away at him; cracks surface in his skin. At the climax of the story, his sister hears him crying and shares her own struggles. Her empathy gives him the tool he needs to take action. He talks to his parents and receives their support. He returns to school where he thought he was the only one struggling, and his eyes open so he sees all the anxiety that his friends deal with. He realizes that everyone struggles over something. That gives him the inner courage to reach out in friendship to others. At the end of the book, as he takes action and regains some emotional health, the fissures and missing parts begin to disappear; he begins to look more whole. 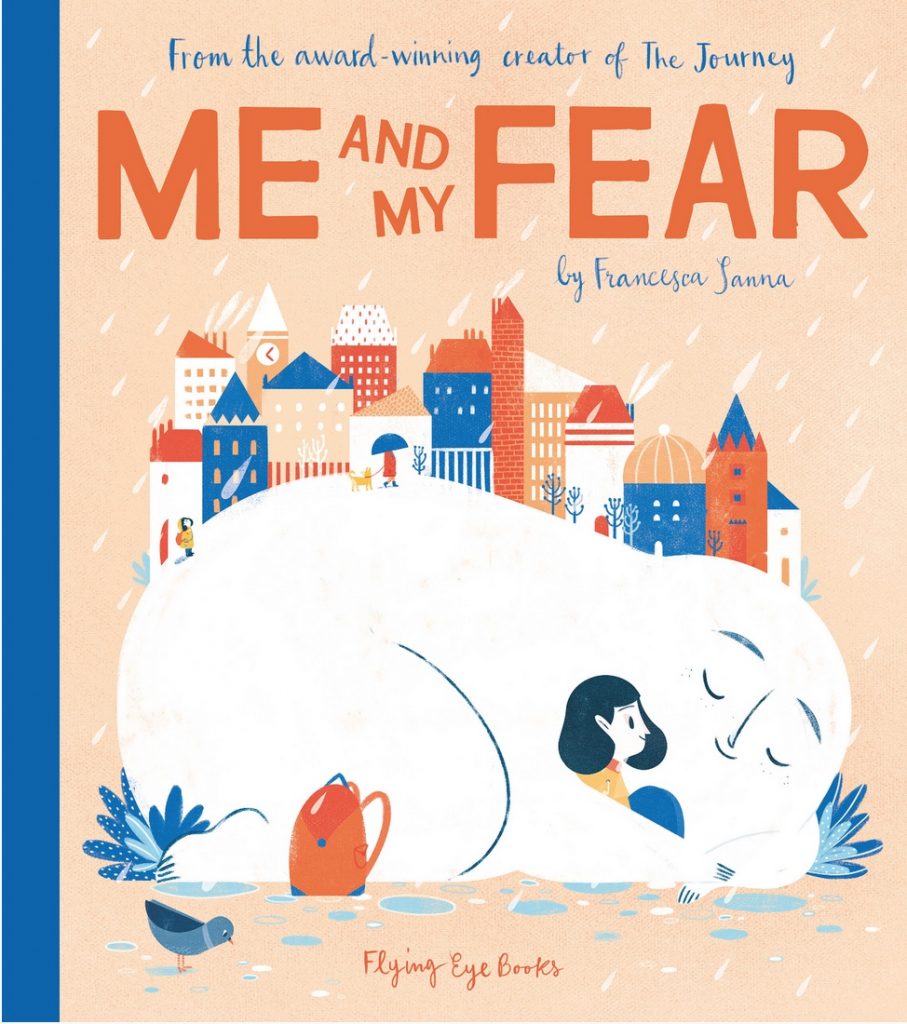 Me and My Fear by Italian author/illustrator Francesca Sanna
In this sequel to the award-winning story of forced migration, The Journey, the young girl is now a new immigrant, negotiating all the changes that come with making new friends and learning a new language. Her constant companion is Fear. At first she acknowledges that, in the past, Fear has helped by keeping her safe in potentially dangerous situations. But in her new home, Fear grows larger and larger, eventually preventing her from taking action to try out new situations or reach out and make new friends. One day a boy invites her to draw with him, and through the action of creating art together her Fear begins to shrink back to normal.

Tomorrow by Syrian author/illustrator Nadine Kaadan
The final book I want to profile is one in which hope is gone and intentional creative action restores hope. Yazan lives in a city that is being bombed and is dangerous. What was normal life is now changing; his artist mother quit painting and his father makes dozens of phone calls before venturing out. When he can no longer go to the park and his school is closed, he tries to while away the hours by doodling, building a pillow castle and making 142 paper airplanes. Boredom pushes him to take action, and he sneaks outside. When he discovers that his city is more of a ghost town, he does not know how to react, but his father finds him and leads him back to the safety of home. His empathetic mother gets out her paints and together they paint his bedroom walls with park scenes where he can go in his imagination. The act of painting scenes where they played together help both Yazan and his mother deal with the uncertainty of their current situation.

The actions taken in these titles may be dangerous, big, or small. But the models they give readers are that of people who believe that they can have an impact on where they live and then go out and take action.