When I write the WOW Currents blog posts, I try to have a unifying theme for each week, but this week “bamboozled” me! The best I could come up with is “Science and Math Books That Are Too Good to Miss!” So below is a collection of outstanding books that are more than just information–they teach math and science by absorbing facts through narrative-style text and vivid illustrations. These books are great for repeated exploration!

The five senses of sight, smell, touch, hearing and taste tell us a lot about our world. The senses help us avoid danger and find food that nourishes us. The following three books by French and Ukrainian authors and illustrators take a look at how sight, smell and hearing work for humans and a wide variety of animals. 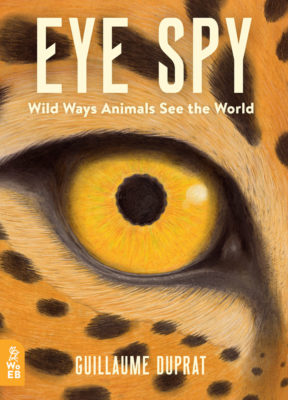 In Eye Spy: Wild Ways Animals See the World author/illustrator Guillaume Duprat (2018) uses an ingenious way of demonstrating how the various quantity and types of lenses in the eye impact what an animal/insect/reptile sees. Using the same scene (farm animals in front of a white stone barn) and blown-up images of eyes, readers are invited to lift the flap and see how that particular creature would see the scene, including the size of its peripheral vision. The accompanying text explains the science behind what that creature sees. 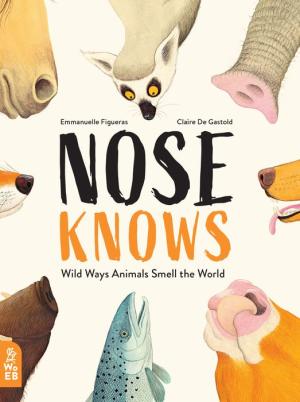 Nose Knows: Wild Ways Animals Smell the World (by Emmanuelle Figueras and Claire De Gastold, 2019) uses the same lift-the-flap strategy to show nasal cavities, how they work and what they can smell for a wide variety of creatures including humans, sharks, moles, honeybees, and earthworms. The book introduces readers to the way various parts of noses help creatures identify their offspring, sniff out a meal, stink to impress a potential mate, get to know another of the same species, ward off predators and mark a migration route. What an amazing use of the olfactory system! 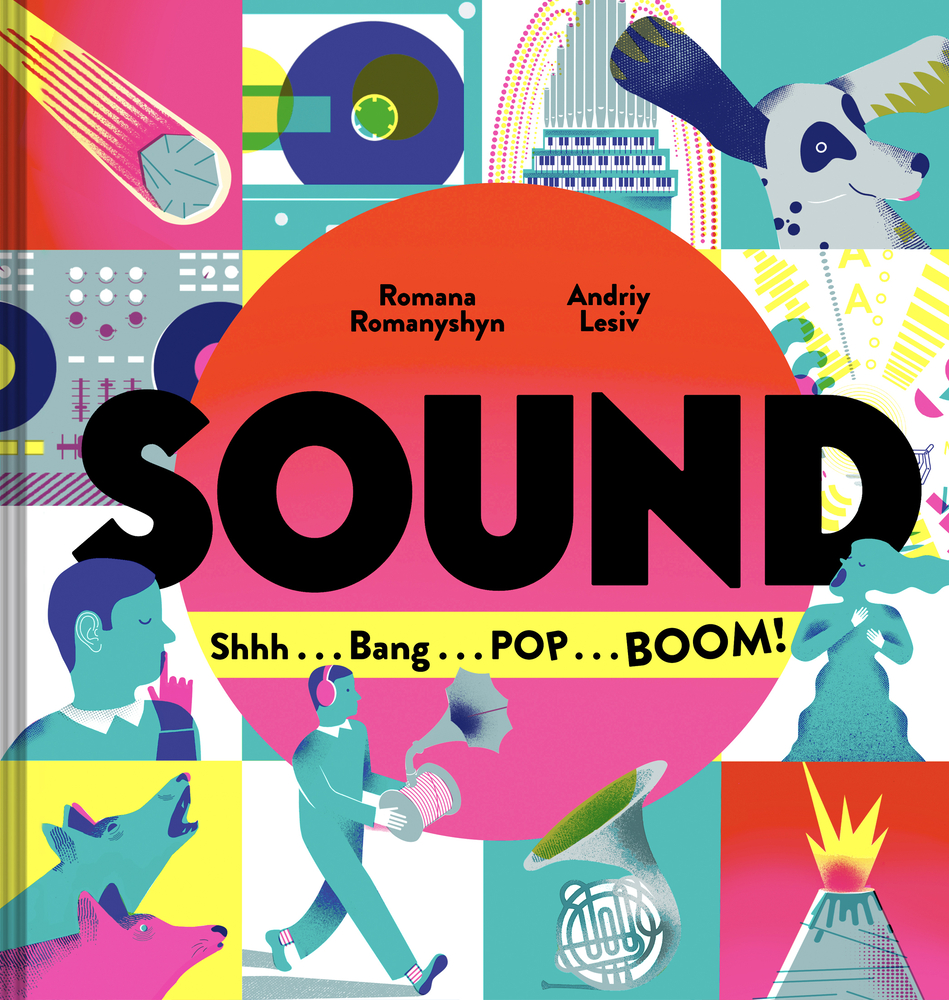 Sound: Shhh… Bang… POP… BOOM! (by Romana Romanyshyn and Andriy Lesiv, 2020) takes a look at sound through visually representing vibrations. Not only do readers learn how the auditory system functions for humans and other creatures, but they are treated to a feast of words depicting sounds. Accompanying info facts discuss ranges in sounds (e.g., soprano vs. bass voices), decibels and hertz, and other sound-related information in a way that makes this book really POP!

Disgusting Critters and the Ecosystem 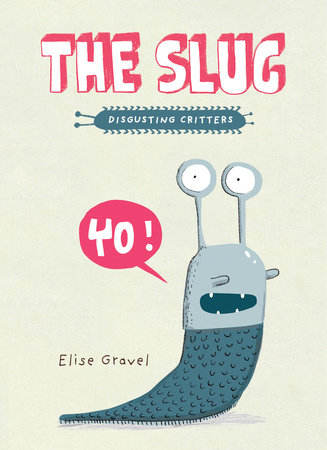 Disgusting critters are fascinating, but what I did not know is how much some contribute to the health of an ecosystem. French Canadian author/illustrator Elise Gravel created a ten-book cartoon-style series, each profiling a critter that we would normally think of as a pest. While most of the other titles do not seem to help out an ecosystem (e.g., rats, cockroaches, mosquitoes, head lice), three in particular (The Slug, 2014, The Worm, 2014, and The Toad, 2016) benefit their world in significant ways. Through the hilarious dialogue and illustrations, readers learn a lot about the anatomy, habitats, food sources, and habits (or “special talents”) of each creature. So, they move from being disgusting critters to amazing ones with significant roles. For example, the slug breaks down old or decaying plant and animal matter and turns it into nutrients for the soil; the toad eats pests that are harmful to crops and are a sign of a healthy environment because they only live in clean natural habitats; and the earthworm recycles nature’s waste turning it into soil, aerates the soil, and even acts as a food source for some humans and bait for fish.

Counting to a Million

Steven Kellogg was one of the first illustrators who tried to visualize the huge number ‘million’ for young readers (How Much is a Million? 1985). The final two books I want to profile are other attempts at showing what very large numbers look like, but each title does so in a unique way. 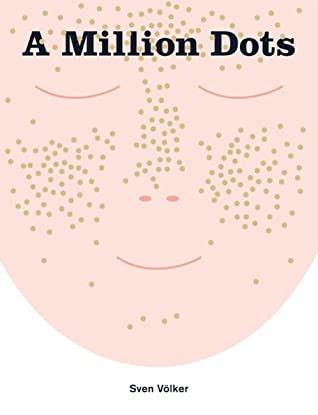 In A Million Dots, German graphic designer Sven Völker (2019) uses dots to represent large numbers. Beginning with one dot (that looks like a tree), he doubles the number with each double-page spread. So, one dot (the tree) doubles to become two dots (two trees) which in turn doubles to become four dots (four apples in the trees). The pattern continues all the way to over 1 million dots. Along the way readers feast on unique images: 16 dots on a ladybug, 128 bubbles in a fizzy drink, 4,096 stars in the sky, 65,536 blades of grass on a soccer field, and finally 1,048,576 miniscule dots on a six-page fold out representing a city skyline.

It is hard to “understand” a million, but because Völker starts small with numbers that readers can see and count, the “believability” of his dot pictures portraying large numbers is high. 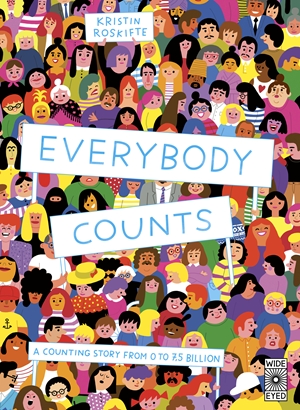 Through a totally different approach, Norwegian author/illustrator Kristin Roskifte visually illustrates number concepts starting at zero and going to 7.5 billion. Instead of dots, she uses people, asking questions that invite the reader to look carefully and infer information about each person on the page. Each double-page spread in Everybody Counts (2020) is a different scene representing a moment in people’s lives. The scenes are unusual and varied, starting in the woods (where there is no one–the concept of zero) and introducing people at home, in a band, a police line-up, a hair salon, a soccer team, a rollercoaster, a funeral, etc. But this book goes beyond just counting–it invites wonder and curiosity through the questions that the author asks about the people depicted. For example, six people are pictured in an elevator with the narrative: “One of them is scared he’s missing out. Two of them feel lonely.” Readers will look carefully at faces and body language to try and figure out the answers! This book concludes that each person on each spread has a unique story and that is true for the 7,500,000,000 people on the planet.

One of my all-time favorite books is People by Peter Spier. Through portraying the wide variety of, for example, interests, nose shapes, eye shapes, and languages, he supports the idea that diversity is a wonderful asset. Everybody Counts supports that same notion but through the idea that we all have unique stories that are worth wondering about.

Next week: taking action to solve a STEM-related problem.