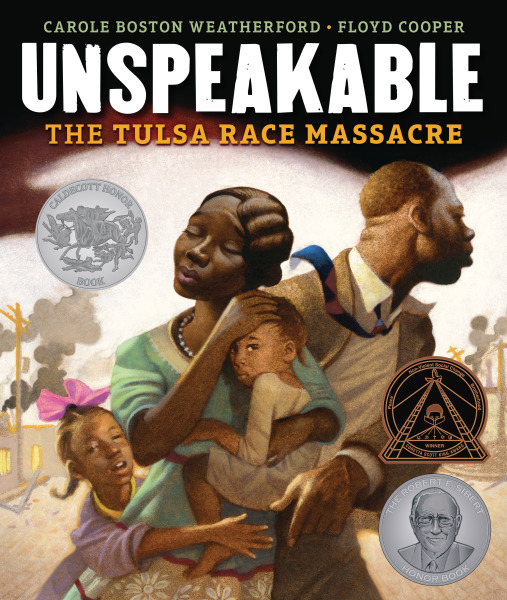 Unspeakable: The Tulsa Race Massacre chronicles the murderous hostility, humiliation and hope of this largely suppressed historical event in United States. The devastation occurred in 1921 when a white mob attacked the Black community in Tulsa, Oklahoma. This third person informational text narrates the incidents that occurred in one of the worst racially violent cases in U.S. Tulsa, during this time, was a prosperous segregated town, where descendants of “Black Indians, from formerly enslaved people, and from Exodusters” thrived in their Greenwood community, once known as Black Wallstreet. “Once upon a time” near Tulsa, is a phrase that is eloquently repeated to depict the prosperity that the people in the Greenwood community created. Then one day, the massacre stemmed from one elevator ride where a 17-year-old white elevator operator accused a 19-year old Black shoeshine man of “assault for simmering hatred to boil over.” This incident resulted in 300 Black people who died, and more than 8,000 left homeless, “…hundreds of businesses were reduced to ash.” It took over 75 years to launch an investigation, which uncovered that “police and city officials had plotted with the angry white mob to destroy the nation’s wealthiest Black community.”

Carole Boston Weatherford and the late Floyd Cooper collaborated for the last time to sensitively reveal to young readers this tragic incident of the hostility that occurred, the humility of how the Black people felt from the hostility, and the “responsibility to reject hatred and violence and to instead choose hope.” These representations are depicted in the sculpture erected at the John Hope Franklin Reconciliation Park. Both author and illustrator provide personal connections to this historical event in the back matter of the author’s and illustrator’s notes. Cooper, who grew up in Tulsa, drew on his grandfather’s stories of the incident, as a survivor of this massacre. Both notes are moving – and are a must read to gain a deeper understanding of the hostility, humility and hope woven throughout the book.

This picture book won numerous awards both for Weatherford’s affective text and Cooper’s luminous illustrations. In January 2022, the book was designated as a Honor Book for the Randolph Caldecott Medal; as Honor Books for both the Author and Illustrator Awards from the Coretta Scott King Award; and a Robert F. Sibert Informational Book Honor Book. I cannot think of a more deserving team to receive these awards. -Recommended by Kathleen Crawford, Wayne State University, Detroit, MI