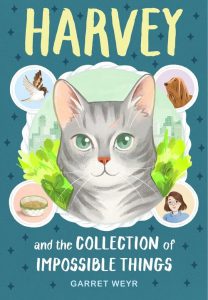 As I noted earlier this month, an eco-cosmopolitan perspective is one way to address environmental issues, but it is an equally great way to explore the interconnectedness of all inhabitants of the planet. The definition I used was Heise’s (2008) in which she asserts that eco-cosmopolitanism is an “attempt to envision individuals and groups as part of planetary ‘imagined communities’ of both human and nonhuman kinds” (p. 61). Exploring ways in which humans are interconnected with other inhabitants of the earth has often been highlighted through conflict, specifically self against nature, which is an interesting perspective to take since that stance suggests that humans are not part of nature. What a theme to take on with secondary students! But for this blog entry, I want to highlight the connection between humans and two cats, Haven and Harvey. Both these cats give a fascinating entrée into “imagined communities” of being, in Harvey’s case, untamed or wild. In other words, feral. And for Haven, she must confront the outside world as she attempts to save her human companion. END_OF_DOCUMENT_TOKEN_TO_BE_REPLACED