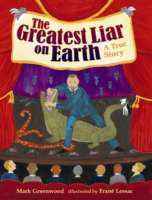 There is not a whisper when Louis de Rougemont steps onto the stage to recount his astonishing experiences on the sea and in lands far away. It is a breathtaking tale of catastrophe and miraculous events. A monster with enormous tentacles! A sea turtle big enough to ride! Fish raining from the sky! Cannibals! But critics say he is an imposter with a gift for spinning yarns. Are Louis’s tales true? Or is he the greatest liar on Earth? Bold, whimsical artwork brings to life the tale of an early-twentieth-century man who held audiences rapt while his critics dubbed him a hoaxer of the highest degree. A fun slice of history sure to inspire a lively discussion of truth, fabrication, and the gray areas in-between.