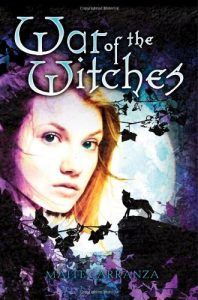 Outsider Anaíd leads a solitary life in a small village in the Pyrenees with her mother Selene. She does not suspect there is anything particularly strange about her family, aside from her mother’s personal eccentricities . . . until one day Selene disappears without a trace and Anaíd is confronted with a shocking truth: her mother is a witch, prophesied to be the chosen one to end an ancient war between two feuding clans.