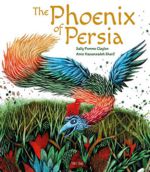 Retold for a modern audience, the story of The Phoenix of Persia is one of the ancient epic stories of Shahnameh (The Book of Kings) by the 10th century poet Ferdowsi, reminiscent of the classic fairytale Snow White and the Seven Dwarves. In this ancient Persian, a king awaits the birth of his son but when the child is born with white hair and skin, he is banished to the forest. The young babe is brought up by the phoenix Simorgh until his father realizes the love he has lost and seeks his return. A QR code is included to download Iranian music to accompany the text.