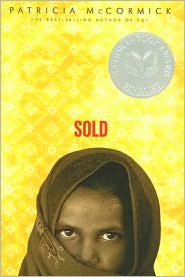 “You are safe here only if you do not show how frightened you are.”

Lakshmi finds that she has embarked upon the most frightening journey of her young life. Believing she is traveling to the large city to become a maid to help her with family expenses, she discovers that she has, in fact, been sold into a life of prostitution. At age 13, Lakshmi was living in a remote village in Nepal, going to school, playing with her goat, and dreaming of time when her family might have a tin roof to protect them from the rain. Her family’s deep poverty, however, will not allow this dream to come true without her help. Her Ama (mother) is respectful of Lakshmi’s stepfather and does not question his gambling activities, his drinking, or his abuse of the family resources. So when he takes Lakshmi to the local market to trade her for 800 rupees, Lakshmi is not surprised but thinks the adults around her are creating a way for her to help the family income. Receiving 400 rupees from the beautiful stranger in the yellow dress—the “new auntie who smells of amber and jasmine and possibility”—Lakshmi’s stepfather leaves her with the promise that he will receive the other 400 rupees when she has proven her worth. And with this transaction, Lakshmi has been passed to the hands of strangers who take her to India with the real possibility that she is lost forever.

Told over approximately one year and in short vignettes, Sold is an upper middle/ secondary grade novel that allows readers to experience how child labor across the world includes work that is sexually abusive and heart-wrenching. Lakshmi brings readers to a world where each one of her reactions is not only understandable, but realistic and courageous. With just enough detail to explain Lakshmi’s pain and suffering, Sold is a sensitive novel that gives readers the distance they may need to accommodate the reality that the world is both good and bad, and its people are both kind and cruel. The author’s note at the end gives more information about how the story reflects the vast number of youngsters sold by their families into the sex trade throughout the world. For middle school students, Sold would make a great companion to texts such as Iqbal (Francesco D’Adamo, 2005); The Breadwinner (Deborah Ellis, 2001); and, A Long Way Gone: Memoirs of a Boy Soldier (Ishmael Beah, 2008) to address themes about child labor and oppression. Texts for older students addressing the theme of the sex trade include The Road of Lost Innocence (Somaly Mam, 2008); Slave: My True Story (Mende Nazer & Damien Lewis, 2005), and the movie, “Born into Brothels.”

What is often missing in the texts written about child labor is the presence of nations in North America and Western Europe. This is a dearth that teachers may wish to address with students, as the practices occur; they are just not yet documented through texts specifically for young people’s consumption. This was part of the reason why the author, Patricia McCormick decided to write Sold and to tell it for young people through a first person perspective.

Patricia McCormick is a writer and journalist who lives in New York. She has written Cut (Perfection Learning, 2002) and My Brother’s Keeper (Hyperion, 2005) and teaches creative writing at the New School University. Researching for Sold, McCormick traveled to Nepal and India, where she interviewed women and girls who were part of the sex trade or had been rescued from it. She traced the steps presented in the book by starting in a small village in Nepal and journeying to Calcutta’s Red Light district. She also interviewed a man who sold his girlfriend for a motorcycle. Winner of a number of book awards, more information about McCormick can be found on her website: http://www.pattymccormick.com/