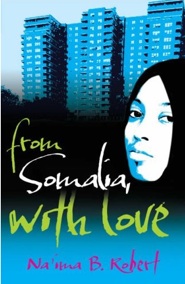 This novel is based on a Somalian Muslim family who is part of a settler society in England. The protagonist is a teenager, Safia, who has lived her entire life in East London with her mother and two brothers. The story begins when the family of four gets news that the father, who has survived the war in Somalia, is coming back into their lives after being entirely absent. The ensuing stresses and struggles of this Muslim family to adjust to another authority figure during their teenage years form an interesting tale. It frames life in London and portrays the struggles of many Muslim families who emigrate to Western societies and still want to stay connected to their customs and traditions.

Safia is a character who is connected to her religion and uses it as a lens to view the world in which she lives. She functions with ease at school, traversing successfully between both spaces. She is deeply linked to the strong female and male family relationships: her mother, her aunt, and brothers at home and her friends at school. She has an extensive extended family that also helps in keeping the Somali culture alive. The story provides an array of diverse Muslim-Somali characters that provide a holistic view of positive and negative people and make the representation more authentic. Her younger brother and her cousin provide the much needed contrast to Safia’s overall pious Muslim existence. Both of those characters come through as rebellious against the religious and cultural norms and get in trouble throughout the story’s passage. The hybridity of British-Somali characters is interwoven with the reality of their existence outside of Somalia itself.

Safia is a poet just like her father. The trouble is that her mother never talks about her husband, which is a tension in this story. Even though the parents are in love the mother has avoided informing the younger children of the relationship or the truth about their life in Somalia with their father. The oldest child remembers as he was old enough to be able to recall memories of their life in Somalia.

As Safia tries to accept sharing her mother’s diverted attention due to her father’s presence, her life seems to be unlike what she was used to before he came back into their life. She reacts to his heavy-handed attitude towards her. He is initially represented as a typical Muslim male who does not understand how to deal with his two younger children, while he is able to slip into the role of a husband and a father to his oldest son with ease. In her resistance to his authority she decides to get close to her rebellious cousin and go out with boys. Throughout this process she knows that she is doing something wrong and her conscience seems to be reprimanding her. The story’s climax occurs when she goes to the movies and realizes that that the boy her cousin has hooked her up with wants something more than just an outing. She walks out on him as she comes to term with the realization that what she is doing is wrong. The boy follows her and insists that he can drop her at her house. She sees a family member and does not want to be discovered by him. She gets into the car to avoid being caught, where the boy tries to rape her, but miraculously her father appears out of nowhere and saves her. It is only after this incident that the mother tells her about her father and their life in Somalia. She begins to understand and accept her father after he mellows and approaches her as an individual rather than a bothersome child. They become a happy family after the resolution of this conflict.

The author, Na’ima Bint Robert (Bint meaning: daughter in Arabic), was born in Leeds and was raised in Zimbabwe. On her father’s side she is Scottish and on her mother’s side a Zulu. She has studied at the University of London. The inspiration to write this story came from her being at a Somali youth retreat and meeting immigrant Somali students. She has had multiple professions, including marketing, performing arts, teaching, and travel. The book jacket states that she has written other children’s books but internet searches for her biography did not produce results. The glossary contains words that are a mix of Arabic and Somali languages and provides further proof of how Arabic religious terminology is used by Muslim cultures in their everyday lives.

The thematic threads found in this story can be found in other books, for example, Ask Me No Questions (2007) by Marina Budhos portrays Muslim experiences in the U.S. after 9/11. Other novels that focus on and portray the religion of Islam as an integral part of the characters living in Western countries are: Ten Things I Hate about Me, (2009) and Does My Head Look Big in This? (2008) by Randa Abdul Fatah, both set in Australia.