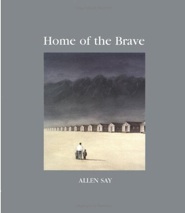 “More than 120,000 Japanese Americans interned in ten camps in six western states- but now the statistics took on a human face and voice. I stared and listened. And what I saw and heard turned into yet another personal journey. This is that story” Allen Say

A man falls into the rapids while he is kayaking and finds a ladder in an underground water tunnel that takes him to a desert. On the desert, he sees ruins of old buildings that he thinks must be on an Indian reservation. He sees two children sitting against the old building, who claim that they are from the “camp.” Each child wears a name tag, but the man cannot understand what is written on them. Allen Say seems to indicate that this must be a Japanese internment camp through the language on the nametags. The man thinks that the children are lost and starts walking into the desert holding their hands. Suddenly a dusty wind blows, and, when the air clears, the man sees a row of buildings. He looks inside searching for help, but nothing welcomes him in the empty camp room except a nametag on the floor. What is more surprising is that his name is written on that nametag. A noise from the outside of the room draws his attention and he sees a group of children who chant, “Take us home.” A sudden beam of light from the watchtowers shines on the children, ordering them to go inside. The children disappear and leave him alone at a round pit, where he finds a nametag with his mother’s name–also his last name. Hearing another voice from the hole of the pit, he enters the pit and falls asleep. When he wakes up, he meets a different group of children who are Native American and who claim to be from ‘the camp.’ This time he sees his lost kayak and himself lying by a river, where he finds more nametags on the ground. The man grabs the two nametags he had brought with him from the camp along with the other nametags and throws them to the sky saying, “they went home.”

Allen Say was born in Yokohama, Japan and came to the U.S. when he was sixteen. He won a Caldecott honor and a medal for two of his books, The Boy of the Three-Year Nap and Grandfather’s Journey. This story seems to illustrate a form of time travel in that the protagonist travels to the Japanese internment camp in the past and comes back to the present where the Native American children claim “camp.” The camp connections question whether it makes a difference to be in the present or the past. His experiences of two groups, Japanese-American children in the past and Native American in the present, are signaled through the use of color in the clothing and depictions of the characters. The red kayak from the beginning of the story gives a clue for whether he is in the past or present. The uniforms of the Japanese-American children are portrayed in a black and white “documentary film” tone signaling the past while the man’s blue jeans and a white shirt are from the present. The plastic red kayak seems to symbolize the present. The Native American children on the reservation also have color in their clothing and do not wear uniforms. Different types of lights and noises play a role in transitioning between times when the main character travels. Bradford (2007) says that Say explores the ‘processes of national myth’ that the U.S. is “home” while children within the nation are wrenched away from homes and families. Native American children were sent to Indian schools from 1879 until the 1960s. From 1941 to 1944, 120,000 Japanese Americans were relocated in internment camps in remote sites across the U.S. Home of the Brave invites readers to consider the connections between past and present. When the man sees his name reflected in the names of his mother and her father on the nametags, his relationship to previous generations of Japanese-Americans and to the contemporary groups of Native American children in the ‘camp’ make a powerful connection. The interesting match between the historical context and the contemporary realistic story creates quite a surreal experience.

In an interview, Say said that he uses his camera as a research tool and then sketches from the photographs. He happened to come across a Dorothea Lange photo of a Japanese family, the Mochida family, at the Japanese American National Museum in Los Angeles, and created the images of the children from these photographs. The older girl in the book is based on Mikki Mochida from this family. Three generations of the Mochida family came to the museum to celebrate the launching of the book, and Say was struck by their lack of bitterness about their internment camp experiences. See the entire interview by Marilyn Marjorie Coughlan at http://www.papertigers.org/interviews/archived_interviews/asay.html

Japanese internment camp stories such as A Place Where Sunflowers Grow (Amy Lei-Tai, 2006), Weedflower (Cynthia Kadahota, 2009), Journey to Topaz (Yoshiko Uchido, 1971), and Remembering Manzanar(Michael L. Cooper, 2002) can be read with stories about Native American children’s journeys of leaving their reservations and joining a new school such as Sweetgrass Basket (Marlene Carvell, 2005) and The Absolutely True Diary of a Part-Time Indian (Sherman Alexie, 2009).