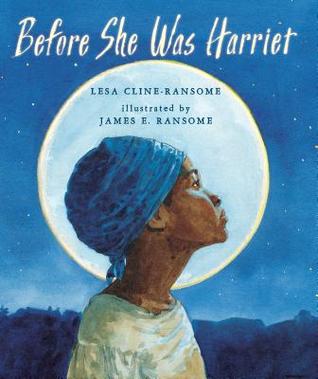 In their uniquely-crafted biography of Harriet Tubman, the author-illustrator couple Lesa Cline-Ransome and James E. Ransome break with the tradition of documenting a person’s life chronologically and prosaically. Cline-Ransome chooses simple, sparse, and deeply affecting verse to invoke the indomitable spirit of Tubman. In the first few pages, readers encounter the fearless activist as an “old woman / tired and worn / her legs stiff / her back achy” waiting for a train, and then accompany her on a journey into the past. Each double-page spread is a meditation on the dangerous roles she assumes and her many, often unconventional, identities. As a suffragist, her thunderous voice calls out injustices against women; as General Tubman, she ferries slaves to freedom as the South goes up in flames; as a Union spy, she carries secrets across battlefields to soldiers — soldiers she has tended as a nurse when they lay injured “in the bloodied dirt of / the southern soil.” She is also Aunt Harriet, Moses, and Minty before she is young Araminta whose father taught her “to read / the woods / and / the stars / readying / for the day / she’d leave behind / slavery / along with her name / and pick a new one / Harriet.”

In the concluding pages, Harriet boards a train and sits facing forward in dignified repose. She has fulfilled her dream of living “long enough / to one day be old / stiff and achy / tired and worn and wrinkled / and free.” Like the contemplative African American gentleman seated behind her, we owe her an incalculable debt of gratitude. James E. Ransome’s luminous watercolor illustrations deftly complement this triumphal anthem, and echo the passage of time. Light snow, late afternoon sunshine, blazing fires, sunsets and moonlight — and the shadows they cast — illuminate the power and the vulnerability of Harriet Tubman, evoking powerful emotions.

Before She Was Harriet was honored at the 2018 Jane Addams Children’s Book Award ceremony. In her acceptance remarks, Cline-Robinson recalled the life-changing impact the story of Harriet Tubman had on her own life. As a child, who was usually the sole black student in her elementary classes, an uneasy hush descended upon her peers each year when the topic of slavery came up. She could feel their secret stares and knew they believed:

…that somehow, those inaccurate and incomplete depictions of enslaved persons portrayed my ancestors, and ultimately my legacy as one of victimhood. Of people too afraid, too incapable, too weak to resist. Until one year, we read about Harriet Tubman.

Her story made me sit taller in my seat. That year, and all the years following, I held my head high. Harriet taught me, and everyone else in that room, what resistance looked like. Here was a woman who looked like me, who outsmarted everyone. She was fearless. She was a fighter. A leader. A hero. I dared to believe she was me.

Sitting tall with her head high in the world of children’s literature, the author has garnered much critical acclaim for her biographical picturebooks. Finding Langston (2018), her middle-grade novel, received the Coretta Scott King Honor, the Scott O’Dell Award for Historical Fiction, as well as several five starred reviews.

At the ceremony, distinguished illustrator James E. Ransome paid homage to the courage of the woman who raised him, his share-cropper Grandmother, whose life-force was replicated in his portrayals of Harriet Tubman. Ransome has illustrated many works by eminent children’s authors, including Jacqueline Woodson, Deborah Hopkinson, and Eve Bunting, and received accolades of the highest order, including the 1999 NAACP Image Award for Outstanding Literary Work in Children’s Literature, the 1995 Coretta Scott King Illustrator Award, as well as a Coretta Scott King Illustrator Honor in 1994.

Before She Was Harriet lends itself to a wide variety of book pairings. One could explore the text’s unambiguous message — that social justice and self-actualization are inextricably entwined—in other offerings by Lesa Cline-Ransome and James E. Ransome: Just A Lucky So and So: The Story of Louis Armstrong (2016), Freedom’s School (2015), Light in the Darkness: A Story About How Slaves Learned in Secret (2013), and Words Set Me Free: The Story of Young Frederick Douglass (2012). One could focus on the ingenuity of individuals who navigated the Underground Railroad in Moses: When Harriet Tubman Led Her People to Freedom (Carole Weatherford and Kadir Nelson, 2006), Henry’s Freedom Box: A True Story from the Underground Railroad (Ellen Levine and Kadir Nelson, 2007), and Under the Quilt of Night (Deborah Hopkinson and James E. Ransome, 2005). Collaborative endeavors by author-illustrator couples Andrea Davis Pinkney and Brian Pinkney might also be explored: Sit-in: How Four Friends Stood Up by Sitting Down (2010), Martin & Mahalia: His Words, Her Songs (2013), and Martin Rising: Requiem for a King (2018). These texts, like those crafted by Lesa Cline-Ransome and James E. Ransome, reveal collaboration to be the driving force for change.