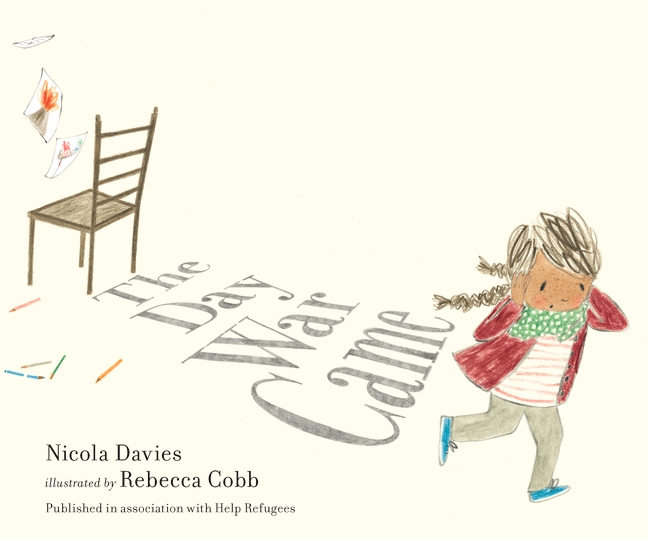 The Day War Came chronicles the ravages of the war and the refugee crisis through the voice of a young, unnamed girl in an unidentified country. She begins her story with what many readers will find ordinary — her loving family at the breakfast table, a kiss then a walk to school where she learns about volcanoes, sings about tadpoles turning into frogs, and draws birds — until “just after lunch, the war came.” In the frantic aftermath that turns her home, school, and life into rubble and ash, readers see the young girl on her knees as she discloses,

I can’t say the words that tell you about
the blackened hole that had
been my home.
All I can say is this:
War took everything.
War took everyone.
I was ragged, bloody, all alone. (unpaged)

Losing her family, she flees with other refugees on an overloaded, leaky boat. Yearning for sanctuary, they reach land at last, disembark and wade through the surf. Nearing the shore, our young narrator observes two tiny, red shoes drifting apart and empty, embodying the tragic loss of innocent life. Alone in a land she does not know, she huddles in an abandoned hut with nothing but a dirty blanket, that cannot shield against the conflict that has penetrated her being:

But war had followed me.
It was underneath my skin,
behind my eyes,
and in my dreams.
It had taken possession of my heart. (unpaged)

Our young narrator walks and walks searching for help, but doors close and people turn away. Finally reaching a school, she looks in a window to see children — just like her — enjoying volcano lessons, tadpole songs, and drawing. Hoping to find safety, she pushes the classroom door open, only to be met by a grim-faced teacher who declares that there is no room, no chair for her, sending her away. Forlorn, the young refugee retreats to the bleak hut and crawls under the blanket. Just as she is starting to believe “that war had taken all the world and all the people in it,” a boy from the school shows up. With compassion and knowing, he holds out a chair to her so she can attend class and perhaps find belonging, and a sliver of hope.

Welsh children’s author, poet, and naturalist, Nicola Davies, originally published The Day the War Came as a poem in The Guardian newspaper in 2016 in response to the British government’s refusal to grant sanctuary to 3,000 unaccompanied child refugees from Syria. In the backmatter, Davies provides brief information about the number of child refugees. She provides references to the groups Help Refugees and #Chooselove, as well as her #3000chairs campaign, which called upon authors, illustrators, and children to paint, draw or sketch an empty chair to express their outrage about the lack of action to help refugees. These welcoming chairs were exhibited in an online gallery, while the original artwork was auctioned off to raise money for refugees. Readers can visit Davies’ blog to view a chair she created herself.

Davies’ simple, yet deeply affecting text offers chairs as a metaphor for belonging, stability, and our human right to sit at the table of learning. British illustrator, Nicola Cobb, extends this metaphor in her haunting, child-like pencil and watercolor illustrations. Double-page spreads along with the use of panels communicate the movement and displacement of the unidentified child refugee. Cobb masterfully contrasts hues, values, and perspectives to convey the child’s despair and hope.

The understated narrative provides an opportunity for readers to reflect on the plight of children in the refugee crisis without being terrorized. It is striking that an empathetic child, not an adult, reaches out to give practical help to the abandoned girl. His symbolic act demonstrates to adults — not simply children — that we must work together to address the problems caused by war. The Day War Came will undoubtedly ignite conversations about inclusivity, justice, and peace, emboldening readers of all ages to “push back the war with every step.” (unpaged). The following texts can foster further dialogue on how war changes everything: Lost and Found Cat: The True Story of Kunkush’s Incredible Journey by Amy Shrodes and Doug Kuntz, illustrated by Sue Cornelison (2017); Where Will I Live? by Rosemary McCarney (2017); and Stepping Stones: A Refugee’s Family’s Journey (Margriet Ruurs and Nizar Ali Badr 2016). To support conversations of a philosophical nature with young readers, pair this book with Shooting at the Stars: The Christmas Truce of 1914 by John Hendrix (2014) and The Enemy: A Book About Peace, by Davide Calì and Serge Bloch (2009). Both texts help readers ponder fixed notions about war and “the enemy.”

British illustrator Rebecca Cobb is no stranger to the concept of loss. The first picture book she wrote and illustrated deals with grief from a child’s point of view (Missing Mummy, 2012). Rebecca lives in England but hails from Cornwall.

WOW Review, Volume XII, Issue 2 by Worlds of Words is licensed under a Creative Commons Attribution-NonCommercial-ShareAlike 4.0 International License. Based on work at https://wowlit.org/on-line-publications/review/xii-2/