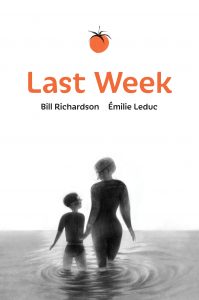 Did you know that there are six hundred four thousand and eight hundred seconds in one week? That’s a lot of seconds but not enough for a grandchild who is counting the hours, minutes and seconds that are slipping away. “Make every second count” (p. 12) is what Gran always says. And that is exactly what Gran does during her final week of life—talking to friends on the phone, visiting with others who stop by, sharing remember-when stories, spending time with family, and celebrating her long life with family and friends in a Canadian setting.

The black and gray illustrations, along with the beautiful book design and the uncomplicated text, exquisitely depict the love between a pale-skinned child and grandmother. Each chapter begins with a white double-page spread with the day of the week displayed. Readers learn about what Gran does that day. Each chapter closes with the grandchild counting the seconds left till the end of the week as well as a double-page spread completely in black, signaling the end of the day as well as the grief that is occurring in the home. For example, on Tuesday the door buzzer rings all day. The grandchild’s job is to greet visitors, take their coats, and put their food contributions in the kitchen. Later that night the child wakes and watches her father cry, his shoulders shaking with grief as he stares at all of the food in the refrigerator.

When no one calls or visits on Thursday, Gran and grandchild drink tea together and Gran retells her miraculous birth story. “One minute you weren’t there, and the next minute you were, with all your fingers and all your toes, and your eyes wide open” (p. 36). The grandchild responds, “You were there when I was born. And now I’m here for you” (p. 39). Gran says, “For when I’m set free” (p. 39). The illustration shows them hugging and comforting each other.

On Saturday, Mom explains what will happen on the last day. The doctor will give Gran medicine to help her relax and sleep before she takes the last medicine. The grandchild wonders, “Will it hurt?” (p. 53). Later after Gran takes a nap the child inquires, “Are you sure?” and Gran says, “Yes” (p. 54). This honest conversation helps the grandchild come to terms with Gran’s decision. When the final day of Gran’s life arrives, the grandchild finds a colorful surprise on the balcony as a goodbye gift. This sensitive and heart-rending story shows how difficult it is for family when losing someone they love.

Although Last Week is one of the first children’s books on medically-assisted death, there are numerous titles for children on grief and death that could compliment this current book. These books include The Sour Cheery Tree by Naseem Hrab and Nahid Kazemi (2021), Some Days by María Wernicke and Lawrence Schimel (2020), and One Wave at a Time by Holly Thompson and Ashley Crowley (2018).

Author Bill Richardson, who lives in Vancouver, British Columbia, experienced a death with dignity when his partner’s mother chose a medically assisted death. He watched her say goodbye to family and friends at the very end and noticed how the people sat around, talked, laughed, told stories and ate. He told CBC News that he was struck by how different mourning was because they could prepare for it.

The afterword is written by Dr. Stefanie Green, the co-founder and president of the Canadian Association of MAiD or Medical Assistance in Dying, which is followed by a list of resources for parents. Gee (2022) interviewed Richardson and learned that he wrote the book in a single sitting, but didn’t come up with the idea of using time and counting until later. Richardson believes there is comfort in numbers and that they can be quantifiable. In addition, he intentionally chose not to assign a gender to the grandchild because it doesn’t matter in the context of the story.

Richardson has written over 25 books for adults and children such as The Promise Basket (2019), The Bunny Band (2018), and The Alphabet Thief (2017). He has had various careers as a radio broadcaster, children’s librarian, Whole Foods stocker, and a writer (Lederman, 2022).

Illustrator Emilie Leduc from Montreal, Quebec has degrees in Graphic Design and Animation. She has written and illustrated several children’s books, including All Year Round (2015) and Un Panda Tricote (2013) in French. Visit Leduc’s work at https://www.emilieleduc.com/

Last Week is like a consoling hug, sharing grief, mourning, and love through the eyes of a young child.

Lederman, M. (2022, April 15). After 30 years at the CBC, Bill Richardson is stocking shelves at the Whole Foods—and loving it. Globe and Mail. https://www.theglobeandmail.com/arts/art-and-architecture/article-bill-richardson-profile/

WOW Review, Volume XIV, Issue 4 by Worlds of Words is licensed under a Creative Commons Attribution-NonCommercial-ShareAlike 4.0 International License. Based on work by Deanna Day-Wiff at https://wowlit.org/on-line-publications/review/xiv-4/6