Eight highly motivated teachers have been working on the Eastern Shore of Maryland to enhance transdisciplinary learning using global literature as a springboard for classroom investigations. The teachers who took part in our community exploring global environmental literature were also engaged in a Maryland State Department of Education funded STEM grant. As participants in that grant they were already exploring cross-curricular connections to STEM enriched instruction connected to Common Core State Standards. During the school year they met on a Saturday each month to discuss transdisciplinary curriculum in their classrooms with a group of twenty teachers. From the larger group eight of these teachers had the opportunity to internationalize their activities through participation in the WOW community.

So why were STEM (Science, Technology, Engineering, Math) teachers engaged with global literature? The theoretical foundation for this project builds on the understanding that, in providing windows and mirrors, literature can build bridges of international understanding (Bishop, 1994; Lepman, 2002). Narrative in particular has the potential to facilitate integrated learning across the curriculum by providing a rich personal context in which readers can construct meaning. STEM education in recent years has been conceived as transdisciplinary and Common Core State Standards are also generally interpreted as promoting learning across the curriculum. When broad themes and alternate perspectives on topics such as the earth’s ecosystems are presented in ways that connect understandings across disciplines, our knowledge base becomes deeper and richer. (Lauritzen & Jaeger, 1997; Pappas, Kiefer, & Levstik, 2006) This is especially true when literature is used in thematic units that include a range of narratives, approaching the theme through different genres and formats from diverse social and cultural perspectives.

So the Global Environmental Literacy Community would stay on those Saturdays after the other STEM teachers left to discuss international children’s books related to environmental stewardship. They talked about what fiction and nonfiction titles were available, why narratives from some regions of the world were absent in the U.S. market, and in particular the direct integration of these books into what they were trying to accomplish with transdisciplinary learning in their classrooms.

One of the first things the global environmental literature group did was to create a website collecting and disseminating the information about children’s books from around the world that have a focus on environmental stewardship. We defined global literature as being international “either by topic or origin of publication or author” (Lehman et al, 2010). Effort was made to locate high quality books published in and/or set in diverse regions around the world. The website that resulted from this work can be found at here.

Another connection was an annual children’s and young adult literature festival in April at Salisbury University at which the Green Earth Book Awards are presented. The goal of the Green Earth Book Award is to “use the power of story to teach children about our natural environment and the responsibility we all have to protect it.” All of the books that have been shortlisted for these youth book awards focusing on environmental stewardship are housed in an Environmental Literature Collection in the university’s Curriculum Resource Center. Teachers in our community explored the collection for books that were originally published abroad or with an international setting. They then determined which of these books would best fit with the context of their classrooms. Some choose books specifically to enhance the range of available perspectives; others choose books based on appeal as whole class reads. The authors and illustrators who were recipients of the awards were in the region anyway so we were able to have some of them meet with children in the classes in which their books were being read.

Cassie Wilson and Denise Gregarious, fifth-grade teachers at Maple Elementary, have been engaged in a year-long study of environmental stewardship and so would able to integrate the books into their transdisciplinary approach to the curriculum.

Their culminating activity involved a visit by author/illustrator Claudia Davila, originally from Chile and now residing in Canada. The kids had created questions for Davila about her book and about stewardship. Davila’s graphic novel, Luz Sees the Light (Davila, 2011), has a protagonist who is a Latina child in a Canadian city. This was actually a very interesting concept for the children to consider because the character did not fit with their preconceptions about Canadians or Latinos. Despite cultural differences the protagonist has interests and concerns that were similar to many of the children. Despite a lack of interest at first in becoming an environmentalist, the character eventually galvanizes the community. Davila spoke, answered questions and drew images from the book. The kids even decided that they would cut out the part of the blackboard with the images drawn by Davila so that they could frame it! One of the reluctant readers in the class became proficient during the workshop at imitating Davila’s cartoon style. He proudly demonstrated his skill for the rest of the class. All of this occurred on the same day that the forestry service provided a tree sapling for each child to take home and plant.

In addition to the set of books that will remain in the classroom, each of the children received a copy of Luz Sees the Light.

Claudia Davila demonstrates how she creates her character Luz

Three teachers at Salisbury Middle School investigated infusing literature in a transdisciplinary manner focusing especially on the science concepts and the international aspects of the books. They chose one work of fiction, The Carbon Diaries (Lloyd, 2010), which envisions the possible impact of global warming and energy source depletion in a near future England, and one work of nonfiction, Nowhere Else on Earth (Vernon, 2011), about efforts to save the Great Bear Rainforest in British Columbia.

The seventh-grade teachers in the STEM academy created a plan to use The Carbon Diaries as part of direct instruction; however this was stalled as the book moved through the Board of Education’s approval process. The harsh realities in a near future England, ravaged by the social and environmental impact of global warming had excited the interests of students and the teachers, but getting a novel like this on the approved reading list for direct instruction can sometimes take over a year in local schools.

The teachers had great success with Nowhere Else on Earth. The entire seventh grade (over 150 students) came to hear Canadian author Caitlyn Vernon speak. Vernon is with the Sierra Club British Columbia and is involved in the efforts to protect the rain forest. One of her jobs is to oversee negotiations with First Nations people. The voices of the First Nations youth are infused throughout the book. The students were transfixed by the accounts of the Gitga’at people, the environmental issues, and the concept of youth activism. Each seventh-grade teacher received a copy of the book for their classroom library so that in every discipline at every level, students would have access to follow-up in terms of the science, geography, journalism, culture, and politics involved.

In the lessons conceived by the teachers, the sharp contrast between the dystopian futuristic fiction (including The Carbon Diaries and other popular titles such as Ship Breaker, and Firestorm) and youth activist oriented nonfiction (including Nowhere Else on Earth and Gaia Warriors, and Generation Green) will enrich the learning opportunities already created by bringing global voices into classrooms on the Eastern Shore of Maryland. In terms of language arts, the teachers plan to deepen the understandings of how a theme can be explored in different formats, media, and genres.

Gerrie Wiersberg at Fruitland Intermediate has been using a wide range of books in her fourth-grade class as read-alouds and independent reading connected to the classroom environmental science. The books added for this project fit perfectly with the general focus of the classroom but add an international dimension to their transdisciplinary focus, helping connect science, social studies, reading/language arts, and the creative arts. The class started by reading some of Bruce McMillan’s books exploring the ecology of Iceland. They plotted locations on a world map and investigated the lives of puffins and humans in Iceland. With the new set of books they were able to compare ecological conditions in Iceland to what was happening in Kenya (Mama Miti; Napoli, 2010 and Seeds of Change; Johnson, 2010), Eritrea (The Mangrove Tree; Trumbore, 2011), Honduras (The Good Garden; Milway, 2010), and Denmark (Energy Island; Drummond, 2011). Contrasting metaphoric fictional narratives from Australia to nonfiction and fictionalized biography added a layer of literary understanding to the endeavor.

Every student in Gerrie’s class received a copy of The Mangrove Tree through the combined efforts of WOW and a donation from the Newton Marasco Foundation. The culminating activity involved reading this book and meeting with the co-author and illustrator Susan Roth for an art workshop. The global dimension is multifaceted in this final activity. The Mangrove Tree involves the community efforts in Eritrea, spearheaded by a Japanese American scientist, to promote sustainable agricultural change benefiting the people and environment of Eritrea. The story is told in two narratives, one a fictionalized biographical story and the other nonfiction about the efforts. The students came away with new understandings about the world.

Perhaps the greatest impact was created by the “Let’s Hold Hands” project with Susan Roth and the children. She demonstrated her style of collage art and had each child create an image of themselves reusing scrap materials, bits and pieces “that are readily available, that cost nothing, that are recycled from some other purpose, that now will have additional purpose” (Roth 2012). These self portraits were scanned and placed here.

In a relevant, personal way the students applied the concepts they had investigated during this project.

The fourth graders were extremely excited to have their images linked to art by other children from around the world including Eritrea, the country portrayed in The Mangrove Tree. A real sense of self and connectedness to the world around them was created in this project. As Susan Roth suggests, “These hand-made collages will be symbols for the good will of today’s children as they work towards being tomorrow’s peaceful, accepting, respectful, adult friends” (Roth 2012). The concepts explored connected geography, environmental science, creative arts, and literature making the entire endeavor memorable and increasing comprehension exponentially because of the connections across disciplines and perspectives. 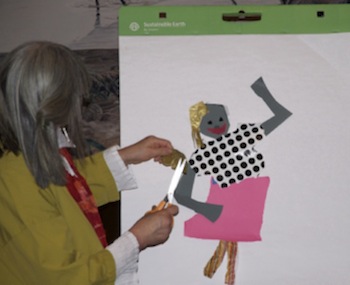 Susan Roth creating her own self-portrait 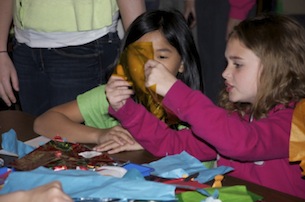 Children explore scrap materials to use in their self-portrait collages.

Ernest Bond is an Associate Professor of Education at Salisbury University with a concentration in children’s and young adult literature.

WOW Stories, Volume IV, Issue 4 by Worlds of Words is licensed under a Creative Commons Attribution-NonCommercial-ShareAlike 4.0 International License.
Based on a work at https://wowlit.org/on-line-publications/stories/iv4/.