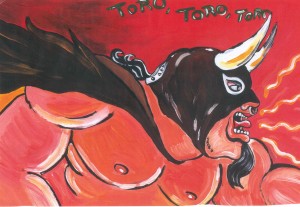 Xavier:That was strictly the publisher’s decision. At the time that I got the contract for Juan and the Chupacabras, my book Lucha Libre still hadn’t come out. I was viewed as not having any experience in the field of children’s book illustrations, which I have to admit is very different from just being able to draw and paint. A lot of work goes into producing these illustrations, and you have to learn to work with art editors. Making illustrations for a book isn’t a one person show. After Lucha Libre came out and received very favorable reviews for the art as well as the story, it opened the door for me to ask to illustrate all of my own books. Zulema and the Witch Owl was also done with Arte Público, and featured my own illustrations. I love my book Juan and the Chupacabras, but I would be lying if I said that I don’t wish that I had done the illustrations myself. I however must say that April Ward did a wonderful job working on the book. Her art alongside the sketches done by Felipe Davalos who was the original illustrator of the book, but who had to drop out of the project due to scheduling complications, were truly beautiful. I have never met April Ward, and this isn’t uncommon when it comes to an author and an illustrator working on a book. They are often kept apart so as to give the illustrator more freedom to turn the writer’s vision into his or her own.

Janine: You are a teacher. Does that help when writing for children? Are you able to try out your ideas on your students?

Xavier: I’ve been a teacher for 15 years at the junior high level for the most part. I do try my stories on them, and they tend to give very honest opinions on what they think of the stories.

Janine: Finally, what’s next in terms of writing/illustrating for you?

Xavier: As far as young adult books I have a new book coming out soon from Arte Público Press titled, Kid Cyclone versus the Devil and other Creepy Stories. It is a sequel of sorts to Creepy Creatures and other Cucuys. I envision my scary stories being done as a three book set, similar to the series put out by Alvin Schwartz who wrote the Scary Stories to Tell in the Dark. I have already begun to work on the third collection of scary stories which I have tentatively titled, La Llorona Can’t Hurt Me and Other Stories. I am also working on what will be my first young adult novel which I have titled Adventures in Mexican Wrestling: A Lucha Libre Novela. It is based on an 11-year-old boy living in a border town. The book touches on the themes of adolescence, family, border life, cucuys and of course, lucha libre. As far as picture books I am working on two projects, a scary but funny story titled, La Llorona Versus the Donkey Lady, and a story about bullies at school titled, A Boy Named Rooster. I have also become very interested in the idea of doing a graphic novel, so I am definitely looking into that possibility.

Janine: Thank you for talking with me!