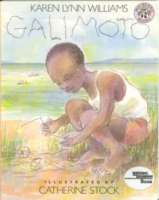 Kondi is determined to make a galimoto — a toy vehicle made of wires. His brother laughs at the idea, but all day Kondi goes about gathering up the wire he needs. By nightfall, his wonderful galimoto is ready for the village children to play with in the light of the moon.