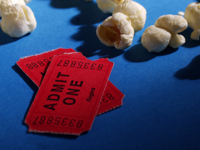 This week I want to examine a trend that the large, conglomerate book publishers are using to sell children’s books. This trend is called branding. Branding is a marketing term for the process of creating a brand that encourages people to identify a certain product more quickly. Nike, Coke, and Microsoft are all brands that immediately evoke a particular product –- and a particular feeling about that product. With books, branding means creating other products that tie in with the book. Book publishers and sellers have used tie-ins with book characters for centuries as a strategy to make their books more attractive to the people -– adults and children -– who buy them. There is concern that this practice has gotten so out of control in the late twentieth and early twenty-first centuries that publishers have lost sight of the goal of publishing to produce good literature and have turned it instead into a commodity driven empire. Let me give you some examples.

This summer, I happened to visit our campus bookstore the week that the new Pixar film Up opened in theaters. The bookstore had a display with no fewer than eight books based on the movie -– one was a picture book of the movie, one was a chapter book about Russell, the kid in the movie, another was about the dog Dug, one was a sticker book –- all this the very week the movie had come out. Kids didn’t even need to see the movie for it to generate sales.

Similarly, the original book Cloudy with a Chance of Meatballs was published in 1982 by Judi and Ron Barrett. The movie version came out this summer along with several books based on the movie, including a “junior novelization” by Rhody Cohon, who was hired to write this book based on the movie –- based on the book.

Finally, let’s take a look at Chris van Alsburg’s The Polar Express, a charming picture book about a train ride to the North Pole that was published in 1985. That book has since been made into a movie, and the movie made into a -– you guessed it -– picture book. So, a child is able to buy the movie version of the book and miss out on the wonderful original –- all thanks to the idea of branding.

Tom Engelhardt (1991) published an article in Harper’s titled “Reading may be harmful to your kids,” in which he was the first voice of caution to suggest that the new corporate owners of publishing houses such as Bertelsmann (parent company of Random House) and Rupert Murdoch’s News Corporation (parent company of HarperCollins) were so intent on spinning toys, clothing, and recordings off of children’s books to make more profit that “the ‘book’ has, in a sense, been freed from the page and can now be encountered in an almost unending variety of audio, video, play, and fashion formats. In the same sense, the habits of reading, listening, viewing, playing, dressing, and buying have come more and more to resemble one another” (p. 58). Books, said Engelhardt, had become just another product, and reading just another method of consumption. Almost 20 years later, book characters from Madeline to Peter Rabbit, Olivia to Clifford have been turned into clothing, films, jewelry, games, bedsheets, and even bandaids. Recently, I went to Target and found the following book characters in different aisles: Olivia, The Cat in the Hat, Curious George, Thomas the Train, Winnie the Pooh (bandaids), and of course Harry Potter, and other items based on the books of Eric Carle and Dr. Seuss and Stephanie Meyer. That was without even checking in the DVD aisle to see which books had been made into movies.

Critics of branding claim that the corporate children’s book publishing companies are no longer interested in publishing quality children’s literature, but rather in developing brands, so that the goal is in selling Harry Potter rather than the books by J. K. Rowling, thus turning children not into readers but rather into consumers. This practice encourages children not so much to read for recreational or enjoyment purposes, but rather to consume for consumption’s sake. Whether you are reading the book about your favorite character, or watching a DVD about that character, or sleeping between sheets with that character printed on them, you are consuming.

Another way in which large publishing companies create brands is by encouraging celebrities to write children’s books, even if these celebrities are not recognized authors of children’s books (or even recognized for their writing skills). Katie Couric, Madonna, Paul McCartney, Julie Andrews, Bill Cosby, Jamie Lee Curtis, Whoopi Goldberg, Jerry Seinfeld, Sarah Ferguson, John Lithgow, Will Smith, Shaquille O’Neal, New York Governor Mario Cuomo, and Jimmy Carter have all written children’s books, along with many, many others. The problem is that not all of these books are good; in fact, many, like Couric’s, Seinfeld’s, and Madonna’s, are downright awful, but parents will buy them because they recognize the name of the author (I contend that the adults buy these books for themselves).

Hade (2002) argues that there is less quality control over the books that are published since there is less attention paid to selecting quality literature. In the 1960s and ‘70s, the major markets for children’s books were school and public libraries, and books were purchased by teachers and librarians who were specifically trained in finding and selecting high quality children’s literature. Funding was available to buy books through local, state, and federal programs through such new laws like the Elementary and Secondary Education Act, passed in the 1960s. Additionally, there were hundreds of small, independent booksellers who worked individually with their customers to determine their interests and to suggest quality books for them and their children. Today, those funds are gone, and libraries can no longer afford to buy books as they once did, so publishers must look elsewhere to make their higher profit margin. Today, that “elsewhere” is chain bookstores where often only a few staff people buy the children’s books for all of the national stores. Hade points out that, in the past, hundreds of owners of independent bookstores would decide for themselves which books to stock, based on their knowledge of their local market; now, big box bookstores like Barnes and Noble hire one person to buy books for each of its categories of children’s books for all of the Barnes and Noble stores across the country. Instead of relying on the interests of its customers, or journals that review children’s books, or librarians, teachers, or parents, this sole buyer relies on the sales records of previous books. As Hade says, these staff people are not looking for quality literature, but rather for a quick sell -– and a quick sell means a recognizable product, whether it is a book written by a celebrity or a book that has been turned into a movie on the big screen.

One thought on “Creating Book Brands”