Storytelling is fundamental to the human search for meaning. (Bateson 34).

Folklore, fables, myths, and legends, stories that originated in the oral tradition are the indigenous literature in every society. Since people were first able to use language for communication, oral storytelling is the way we have passed on our culture and history, beliefs and values. Traditional literature themes reoccur across cultures. These stories explain the relationships between human beings and the animal, plant, and astrological or seasonal worlds. Although the stories may include different symbols and representations, these “folk” ideas center on elemental figures—mother, father, God, trickster, hero, old man, crone, witch, or devil, and on elementary concepts—creation, destruction, birth, death, initiation or coming of age, separation from parents or community, marriage, or the union of opposites.

These literary genres are also vehicles for transmitting and reinforcing archetypes. Characters convey archetypes when they exhibit personalities or behaviors that their society would have them emulate. The hero’s journey is one of the common archetypes in traditional literature that speaks to the young and to the not so young about the vicissitudes of life. Mythologist Joseph Campbell called the hero’s journey a “monomyth” because of its prevalence across cultures, time, and place.

Heroes from the Greek king Odysseus to the world’s revered religious figures prepare for their quests and encounter obstacles and dangers along the path. They are tested. They alternately fail and succeed. And ultimately, they return triumphant and changed with the hard-won ability to better their own lives and that of their entire community. Campbell offers a compelling story map graphic that describes the hero’s journey process: http://en.wikipedia.org/wiki/File:Heroesjourney.svg

In the next four weeks, we will highlight and discuss contemporary global young adult literature that capitalizes on the hero archetype. All four stories include a hero’s journey and in all four books, the narrator or one or more characters move the story forward by telling stories within the story. The story-within-the-story motif is a way for print narrative to imitate life. “Sitting around the table telling stories is not just a way of passing time. It is the way the wisdom gets passed along. The stuff that helps us to live a life worth remembering” (Remen xxxvii).

The stories within the story in Where the Mountain Meets the Moon by Grace Lin are inspired by Chinese fairy- and folktales; Lin presents them as beautifully illustrated interchapters throughout the book. In her author’s note, American-born Lin describes her reconnection with her Asian heritage. At the age of 11, when she had thoroughly rejected all things Asian, her wise mother placed several Chinese folk- and fairy-tale books on Grace’s bookshelf. And thus began her connection to her heritage culture. These tales and Grace Lin’s later travels to visit the lands of her ancestors – Hong Kong, Taiwan, and China – inspired the overarching story of Minli’s quest as well as the stories within this story in this hero’s journey novel.

Minli, an only child, is a sensitive girl growing up in a poor Chinese family. Her family life is rich in other ways. Minli’s father, a storyteller, fills her heart and mind with rich fantasies and possibilities for a better future. When her father told her stories, “[Minli] glowed with such wonder and excitement that even Ma would smile, though she would shake her head at the same time (3).” Minli’s Ma, on the other hand, lives in the harsh real world of the family’s struggle to survive. When Minli sets out on a journey to ask the “Old Man of the Moon” to change the family’s fortune, she meets Dragon who cannot fly. He is also on a quest to find out why he is different from all other dragons. Together and along the way, they are guided by stories and overcome seemingly insurmountable obstacles.

Child psychologist Bruno Bettelheim studied how fairy tales enrich the inner lives of children. He noted that these stories “speak about [the child’s] severe inner pressures in a way that the child unconsciously understands, and—without belittling the most serious inner struggles which growing up entails—offer examples of both temporary and permanent solutions to pressing difficulties” (6). I suggest that these fairy tales can continue to develop the inner lives of people of all ages.

In Where the Mountain Meets the Moon, Lin inserts completely fleshed-out stories into the narrative that direct the actions of Minli and her Dragon “helper.” For example, “The Story of the Old Man of the Moon” told to Minli by her father, inspires her journey. In the story, the Old Man of the Moon, who is the only one who can read the scribbles and scrawls in the Book of Fortune, correctly predicted the future of the magistrate’s son. Minli sets out to find the Old Man of the Moon on Never-Ending Mountain because she believes he will be able to tell her how she can bring fortune to her family.

Which of the stories within the story of Where the Mountain Meets the Moon touch your heart? Which ones connect to your life or other stories you have read? Are there other Chinese folktales that are similar to these? Are their folktales or other literary genre stories from other cultures that connect? 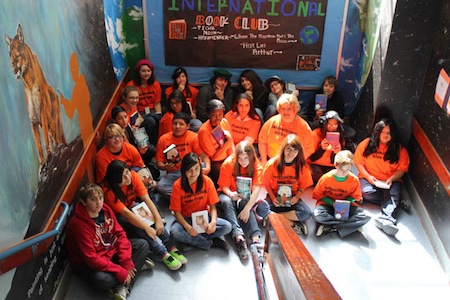 Next Week: Tiger Moon by Antonia Michaelis, translated from German by Anthea Bell

18 thoughts on “The Hero’s Journey in Global Literature: Where the Mountain Meets the Moon”