“I do not want Israelis to be remembered simply for the Holocaust. I want others to understand the richness of our unique 5,000 year old Jewish culture.”

Sima, mother of a recently commissioned nineteen year old Israeli soldier, shared these thoughts as we surveyed a Holocaust exhibit at my college last year. Over time her statement enabled me to re-conceptualize my images of Israel, no longer focused on the World War II genocide but instead aimed toward a more holistic representation.

Throughout conversations with Israeli colleagues this summer, I witnessed a similar need to not dwell on one horrific historical moment. When Hagit and I toured the Ghetto Fighters’ House in Akko, Israel, I recall her explaining how even though her fifteen year old daughter’s teacher had the class read Anne Frank’s The Diary of a Young Girl (Frank, 1952), while at home she purposefully chose not to have her reading Holocaust books yet. Instead her daughter preferred books written in English available on her Kindle, texts many American teenagers might be caught reading this summer (i.e., The Hunger Games, Collins, 2008).

Upon reviewing the Jewish children’s books I own, I realized many of them were centered around WWII. Terrible Things (Bunting, 1980) and Number the Stars (Lowry, 1989), both focused on the Holocaust, were books I read with my elementary students in the 1980s. What a narrow lens I offered readers! As I reflect on the twenty-five children’s books Sima, Hagit, Vered, Janet, Britt and Yehuda identified as their favorites, none of the books focused on WWII.

Through my first two blog posts I investigated classic Israeli children’s authors from the 1960s and 70s, as well as authors whose work is shared with thousands of children through the Sifriyat Pijama program, and found writers who purposefully choose to celebrate every day life. This post continues that focus, on common childhood experiences, beginning with a unique children’s author, a Holocaust survivor. 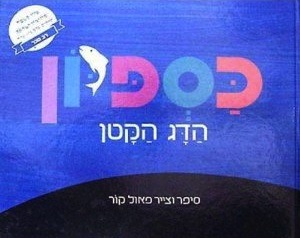 My June visit to the first Holocaust museum, the Ghetto Fighters’ House, a memorial created by survivors of the Warsaw Ghetto Uprising, revealed a surprise. In the midst of stark images of Jewish and non-Jewish resistance to crimes perpetuated by Nazi Germany, I discovered the work of Paul Kor. Downstairs tucked in a quiet corner, you find the Yad Layeled Children’s Museum, currently housing a display of over twenty Paul Kor children’s books, commemorating the 10th anniversary of his death. One book in particular caught my eye since Hagit urged me to purchase the same book the day before.

Caspion (Kor, 1990) or Silverray (the affectionate name referring to his color) is a tale contemplating the common childhood fear of becoming separated from parents. Just glancing at the book cover, the silver glimmer of Caspion captures any young reader’s attention. Paul Kor once described how the main character evolved in this way. “On the table in my art studio lay an open pack of cigarettes, and a ray of light fell on the cigarettes’ silver wrapping and shone on it. From there, in a split second came the idea to write a story about a sliver fish.” (Milner, 2007, http://www.paulkor.com/english/Life Story.pdf) Artistic fame for his work as a children’s illustrator and author came later in life for Kor since Caspion, one of his first books was published when he was sixty-four.

Paul Kornowski’s study of art came about as a result of his escape to Switzerland in the midst of the Nazi invasion of France (he used Kor to sign his books). His peaceful childhood in Paris ended abruptly when his Jewish family sought refuge. Kor’s first art classes in Switzerland occurred during his teen years, while living in a Jewish orphanage, after his mother had him smuggled out of Paris. His father’s capture and eventual sentence to Auschwitz, where he died, is a subject Kor did not appear to explore though his artwork until the last twenty years of his life.

I anticipated Paul Kor’s exploration of the Holocaust, even in a small way. Yet his twenty or so children’s books, written mainly in a 15 year period from 1980 to 1995, dealt with typical childhood experiences. You see a glimpse of sadness or panic at the beginning of Kor’s best known children’s book, Caspion, but the resolution is quite satisfying, the opposite of his childhood. Here is a brief overview: “A small silver fish went swimming in the deep sea, where he met a huge baby whale. The whale was crying because he couldn’t find his parents. Little Caspion (the silver fish) gathered his family and all the small fish set out in search of the baby whale’s mother and father. They found them, of course, and ever since little Caspion and the huge whale have been the best of friends. This illustrated story is scary at the start and joyous later on.” (Baruch, 2012) This friendship story was so well received by readers in the 1990s that it grew into a set of three books with Beware, Caspion (1997) and Caspion’s Great Journey (1999). http://www.jewishlibraries.org/ajlweb/publications/proceedings/proceedings2001/levinejanice.pdf 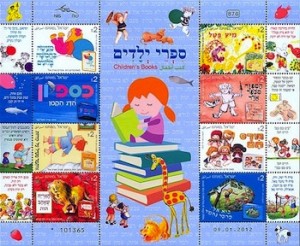 How Kor or any survivor chooses to move past despair toward the goodness of life, even ordinary life events, is a testament to the human spirit. Over his lifetime, Kor’s notable artwork was exhibited in France, Norway, England, Italy and throughout Israel. As a graphic artist he drew illustrations for Israeli banknotes and stamps. Thus it is fitting that his book Caspion was commemorated on a set of Israeli stamps in 2012, along with other Judaic children’s classics by Miriam Roth and Lea Goldberg.

Hagit’s fifteen year old daughter recently relayed how Caspion was one of her favorite tales from childhood. Parents wanting to discuss family safety rules might find this book an ideal way to initiate an important conversation. I could readily see primary teachers interested in exploring issues of friendship, safety rules, or families using Kor’s engaging text as well.

Another children’s book honored in this set of eight Israeli stamps is The Lion That Loved Strawberries (Atar, 1971). As a parent I immediately connected with this book when thinking back to my son’s obsession for either ketchup or peanut butter as a condiment with most meals. The story lines evolves like this: “There once was a lion who only wanted to eat strawberries. But there were no strawberries in his forest. His mother tried to convince him to eat other things, but he insisted: nothing but strawberries. One day some children came to the forest, carrying strawberries in their bags. They fled when they saw the lion, leaving their bags behind. The lion was glad to have the strawberries, but after eating lots of them, said: yuck! Ever since, he eats whatever his mother serves him but now the children, after returning home, want only… strawberries!” (Baruch, 2012).

When dealing with childhood overindulgences, humor helps, exactly what Tirza Atar’s text provides. Primary teachers choosing to conduct an exploration of nutrition could find this book useful. Parents like me wanting to consider eating habits focused on obtaining a healthy balance of foods might find this humorous tale engaging for their children. This story originally appeared in Yael Takes a Walk (1971), which Atar wrote for her daughter Yael. In 2003, when Atar’s book was reissued, it remained on Israeli’s bestseller list for over 100 weeks.

Atar grew up in Tel Aviv as the only child of a renowned Israeli writer and actress. Nathan Alterman cherished his daughter’s writing but pleaded with her not to publish her poetry before the age of eighteen. In response, Atar changed her family name, Alterman, to Atar (meaning “place” in Hebrew), published her poetry and thus established a place of her own as a writer (Ahronovitz, 2005). In her short life of only 36 years, Tirza Atar became well-known for her poetry, lyrics, translations and seven children’s books. Listen to an Israeli singer, Aya Korem, perform Atar’s lyrics of “A Birthday Prayer” set to music by Chava Alberstein.

All of Dani Kerman’s charming illustrations can be enjoyed through a You Tube video clip of Alma, a three year old telling her version of this beloved tale in Hebrew. Alma obviously benefited from hearing this story many times, in order to tell her version so effortlessly. http://www.youtube.com/watch?v=UunNHgZBmww If you prefer listening to an older storyteller share The Lion That Loved Strawberries in Hebrew, go to this You Tube video clip. http://www.youtube.com/watch?v=FMP9uIjYBpI These child-like illustrations, not by Kerman, enable non-Hebrew speakers to obtain a different perspective of the plot.

The third and last book I explore this week already received significant attention since being released only months ago. Blue Melody with Curls (2012) is Eldad Cohen’s first children’s book. A children’s theatre company, Play by the Book, staged the book as a musical this June in Tel Aviv. The goal behind Play by the Book is to share new children’s books with readers ages four to nine. Surprisingly Cohen is not a writer by profession but an Israeli child psychologist. His work as a playwright is also receiving positive reviews outside of Israel. A recent play Cohen wrote, The Elephant and the Mouse, is on stage this August at the Edinburgh Festival Fringe in Scotland.

Blue Melody with Curls tells the story of a young boy’s journey to find his favorite tune, since he cannot sleep. With the help of his mother, he searches his hometown and stumbles upon an odd looking musician who helps him eventually find his beloved song. Parents might find this an ideal bedtime story to help children peacefully transition to dreamland.

I hope this week’s three Israeli books help you continue to find connections between children across countries. Most children contemplate the fear of separation from parents, become picky eaters at times and face periodic sleeplessness. I now realize more clearly how studying the Holocaust offers such a limited view of Israelis today. Imagine teachers from other countries only sharing books about America’s struggles (i.e., The Civil War or The Civil Rights Movement). What a limited view of our nation! Hopefully Sima’s opening request urges us to begin a more diligent exploration of the bridges of understanding available through Israeli children’s books.

10 thoughts on “Israeli Children’s Books: A Parent Perspective Beyond the Holocaust”