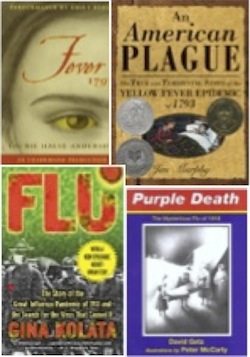 This week, the focus will be on specific pandemic, epidemic, and outbreak historical events captured in picture books and chapter books. Frischknect, Lepper, and Cyrklaff (2008) note, “infectious diseases have played a substantial part in shaping the history of humanity” (p. 995) and “it is often an issue of wrong information” (p. 996). Further, they state, “The dramatic effects of lacking information can be seen in many historical contexts, e.g. the spread of the Plague in medieval Europe, the accidental import of smallpox and measles into the Americas, the deliberate release of infectious agents, or the recent spread of HIV in much of Africa” (Frischknecht, p. 997). The books reviewed this week demonstrate exactly that—the role of infectious diseases in shaping global history.

According to the Oxford Handbook of Tropical Medicine (Eddleston, Davidson, Brent, & Wilkinson, 2008), regarding Yellow Fever (YF), “there are -200,000 cases/year and >30,000 deaths. YF occurs mainly in sub-Sahara Africa; there are far fewer cases in tropical South American and YF does not occur in Asia…. Humans may be accidentally infected when they are bitten by an infected mosquito. The disease may then be spread by mosquitoes from infected human to susceptive human, causing explosive epidemics in urban environments” (p. 728.

In this fascinating look at one of the most momentous epidemics in U.S. history, this non-fiction Newbery Honor Book delves into the impact of Yellow Fever in Philadelphia in 1793. Since YF does not occur in the U.S., how did it get here? Who did it affect? How was it stopped? What did we learn about outbreaks from this particular epidemic? Murphy chronicles the introduction of YF through riveting details in a highly readable book.

While Murphy’s book is a nonfiction account, Anderson’s telling is historical fiction. The narrator is Mattie, a young teenager, who finds herself caught up in the fear, misconceptions, and lack of understanding regarding the mysterious illness that is felling citizens of Philadelphia by the thousands. Coupled with the facts from Murphy’s book, readers gain a well-researched “insider’s” perspective during the crisis of YF in the United States.

“Influenza viruses serogroups A, B, and C are RNA viruses that cause respiratory tract infections in humans. Influenza A can cause epidemic disease, and rarely can lead to a global pandemic” (Eddleston, Davidson, Brent, and Wilkinson, 2008. p. 716.” But that is exactly what happened in 1918—then known as Purple Death and now known as the Spanish Flu, this pandemic “resulted in unprecedented mortality, with an estimated 500,000-675,000 deaths in the U.S. and 50-100 million deaths worldwide” (Hatchett, Mecher, & Lipsitch, 2007, p. 7582).

When I first received this book in 2000, I immediately opened it and read it on the spot. I was fascinated with the topic. I then called my mother who was born in 1922 and who had three older siblings and a younger (1912, 1914, 1916, 1924), and I asked her if she had ever heard of this flu pandemic; her reply, “Oh, yes. I grew up hearing stories about this outbreak.” I was so surprised she had never said anything about it, because I heard lots of stories about polio—both of her older brothers were stricken with polio. But, then she went on to say, “My family was lucky, no one got really sick.” So I suspect that is why she never said anything about it. The fact, though, is that millions got sick and died and many of those were young soldiers in camps across the U.S. One of the confounding questions of this pandemic is, “Why the young and healthy?” Scientists have been unable to answer this as well as its origin—it came in quickly, burned through the populations quickly, and it disappeared quickly.

Kolata, a science writer for the New York Times, meticulously tracks the influenza pandemic that created global devastation from 1918-1920. Throughout her detailed account of this often overlooked crisis in history, Kolata tells of scientists examining remains to genetically map this virus and applying what was learned to modern-day scenarios of outbreaks such as the swine flu and H1N1 virus.

Last week, I began September’s Blog with a review of books related to pandemics, epidemics, and outbreaks in general. Ironically, in our university email this past week was an announcement for “Pandemic Flu: An Exercise in Disaster Preparedness,” a simulation including our campus and two other campuses in our state. In this simulation exercise, participants will “be exposed to some of the threats and consequences of public health emergencies…” and includes discussions from the Surgeon General and the former Director for the Coordinating Office of Terrorism Preparedness and Emergency Response at the Centers for Disease Control. Clearly, this is an issue at the state and federal levels…. As we move toward next week’s blog, I’ll be thinking about books that deal with those infectious diseases which haven’t yet occurred and what happens then…

Ballard, C. (2009). AIDS and Other Epidemics (What if We Do Nothing?). Gareth Stevens Publishing.

Keith, J. (2012). Fever Season: The Story of a Terrifying Epidemic and the People Who Saved a City. Bloomsbury Press. 272 pp.