One of my challenges is to fit inside the boxes that different groups in society create for me to live in. For example, I am a professor, so I live with the box of student expectation and preference for numerical grades instead of narrative feedback (my preference). Another box I live with relates to the frequent moves I have made between countries, states or provinces. Each place has their own way of operating, so I spend the first few months in a new environment learning the rules of that community. There are many rules that are fine and help me get along with the neighbors (e.g., “Mow your lawn once a week”). Others puzzle and constrain (e.g.,”Normal families eat dinner at 6 p.m.”) and end up making me feel odd, unwelcome and definitely not at peace. 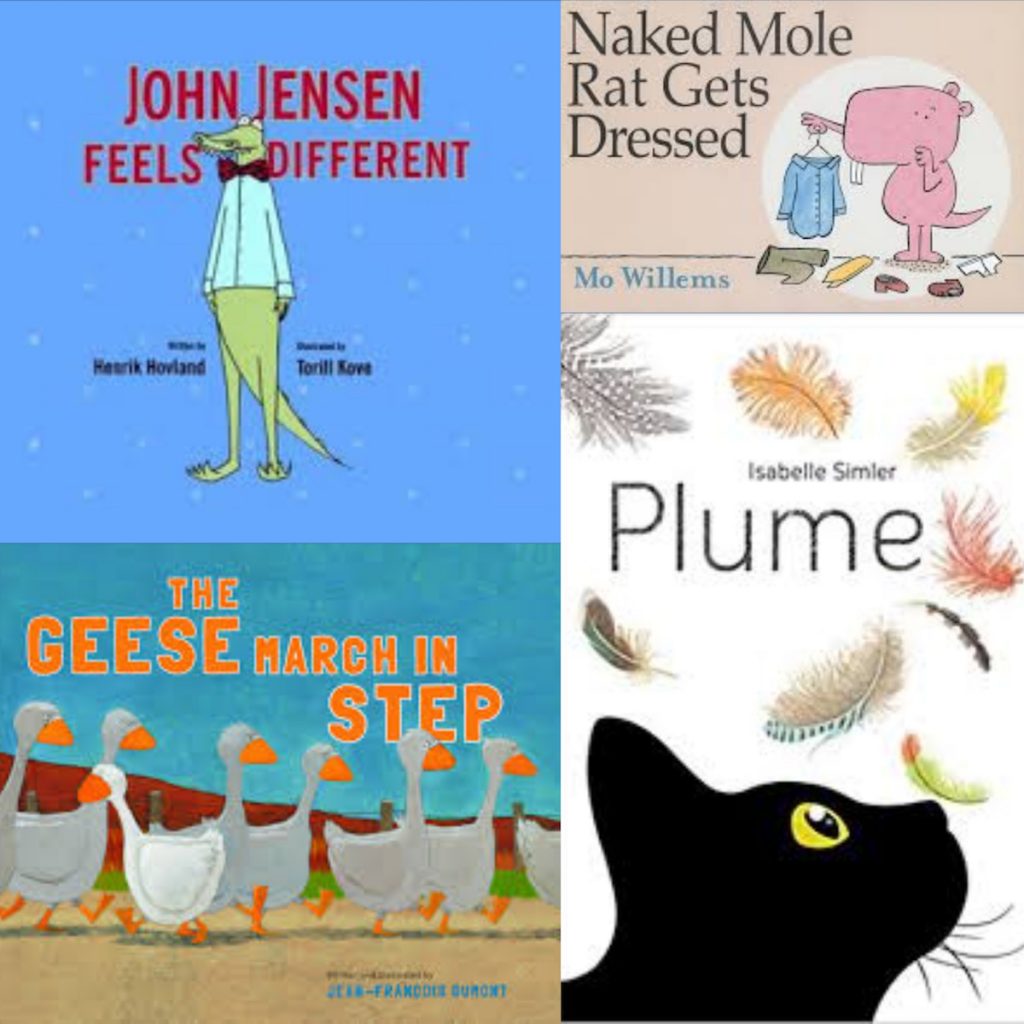 Katherine Scholes and Robert Ingpen in Peace Begins with You describe the third
characteristic of peace as being allowed to be different, and letting others be different from you–a good description of tolerance. At the core of our beings, we all want to fit in. Sometimes the box we fit into is big and expansive and at other times the box society constructs around us is small and constraining. This week looking at stories in which the boxes are constraining. However the stories don’t stop there—-the boxes are challenged, giving the characters a new level of peace and happiness.

The Geese March in Step by Jean-Francois Dumont
In The Geese March in Step, Igor, the leader makes sure that all the geese head to the pond, marching in identical rhythm. “Tradition is tradition,” he proclaims. However, one day he notices a tap in between each step and calls out little Zita, a newly arrived goose. Zita explains that she is curious about a cow and wants to look while she walks and furthermore, does not understand the purpose of marching in step. Excluded from the march by Igor and beating herself up for her inability to stay in step, she goes off exploring on her own. She eventually gathers a parade of other farm animals who appreciate her curiosity about her world as she walks to the pond. Together the animals create a diverse and wild rhythm of their own with taps, shuffles and stomps. The other geese find Zita’s parade much more interesting than the lock-step rhythm under Igor’s leadership and decide to join Zita. From that day on, the farm animals let Igor march alone while they wait to follow Zita in another parade rich with a variety of rhythms.

John Jensen Feels Different by Henrik Hovland and illustrated by Torill Kove
John is an alligator living in a world of humans. He tries multiple strategies for looking human and fitting in, wearing bow ties and carrying a briefcase. His tail is still an issue, so he ties it to his chest under his shirt so he fits in with the “look” of the office. All he gets for his efforts is a very sore tail as he struggles to sit and walk. He eventually gets into an accident because he is unable to walk easily. John is examined by Dr. Field, a large elephant who patiently challenges the alligator’s notions of fitting in when he points out all the ways he uses his large ears and trunk. John figures out his tail is pretty handy for balance when swimming the backstroke or ice skating, and stopping the ball when playing goalie in a soccer game. The story concludes when John discovers another use for a tail; it is a wonderful place to wear a bow during the Norwegian Constitution Day festivities, adding a festive look when waving to the King!

Naked Mole Rat Gets Dressed by Mo Willems
Mole rats do not wear clothes—-except for Wilbur who decides he likes clothes. Faced with the disgust and sarcasm of the other mole rats, Wilbur explains that when he gets dressed, he can feel fancy, funny or cool. Frustrated with Wilbur’s insistence on wearing clothes, the mole rats consult Grand-pah, who thinks long and hard about Wilbur and decides to make a proclamation. When Grand-pah shows up fully clothed, and explains he was challenged by Wilbur’s question of “Why not,” Wilbur is overjoyed. He soon discovers that all the mole rats have decided to follow his lead and is kept busy guiding their fashion choices!

Plume by Isabelle Simler
In this large picture book, a black cat takes readers on a tour of a collection of birds and their feathers. Each spread has the drawing of a feather and a bird. Also on each page is the nose, tail or paw of the black cat, giving the impression that he is hiding from and stalking each bird. The images of the cat become larger with each page, making the cat seem bolder in the hunt. The final spread challenges the readers’ hypothesis and reveals the truth; the cat collects feathers. He loves overstuffed pillows and dreaming… and his name is Plume, which means feather in French. Simler does a wonderful job of leading the reader on one journey only to disrupt assumptions.

Having the freedom to live in ways that feel comfortable can give a sense of peace. Next week we look at a fourth descriptor of peace: the ability to challenge the status quo and make choices that protect peace.