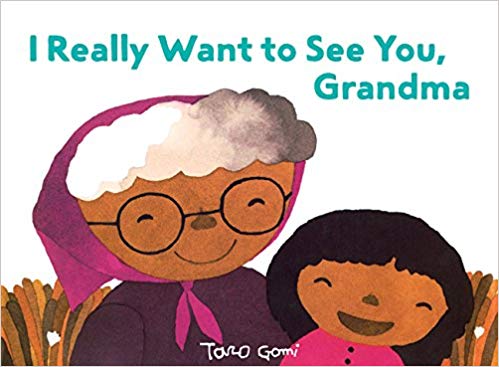 Japanese author and illustrator, Taro Gomi, first published I Really Want to See You, Grandma in Japan in 1979. Finally, it has been published for the first time in English so preschool children can enjoy the simple story and the humorous illustrations. The beginning words and illustration set up the story: “Yumi’s house is on a hill. It has a pink roof. Grandma’s house is on a mountain. It has an orange roof.”

The illustrations for this text are a two-page spread that show the landscape and the distance between the two houses. One day the two relatives “really wanted” to see each other, so Yumi takes a bus and Grandma takes a train to travel to each other’s home. They travel in opposite directions passing each other unknowingly on the way. They arrive at each other’s houses only to learn that each of them has traveled to the other’s house. The layout of the illustrations shows Grandma at Yumi’s house and Yumi at Grandma’s house. On the way back they take different modes of transportation and pass each other again. The lively and comical illustrations show Grandma and Yumi missing each other one more time before traveling on the same road by a motorcycle for Grandma and a scooter for Yumi. Finally, they meet half way and picnic under a tree. Yumi has a solution for the next time they meet–“The next time we want to see each other, let’s just meet under this tree!”

The deceptively simple illustrations show a panorama of scenes across the distance between Yumi’s house and Grandma’s. There are humorous touches that engage children who listen to the story read aloud as they read the pictures. For example, on Yumi’s second trip to Grandma’s, she flags down a truck transporting a cow. The cow takes an interest in Yumi and on the way licks her face. The illustrations are action-packed when each character zooms across the landscape. The text is simple and spare, with the words distilled to convey the essence of the story.

Taro Gomi is a prolific author/illustrator with over 400 books for children. In 2017, he won the Batchelder Honor Award. for his picturebook, Over the Ocean. The Batchelder Award is given to the most outstanding children’s book originally published in a language other than English in a country other than the United States and subsequently translated into English for publication in the United States.

There are several other picturebooks by Taro Gomi that young children will enjoy listening to: My Friends, Spring is Here, Hide and Seek and Everyone Poops. These books are a popular choice to read aloud to young children. Be sure to give young listeners time to see the details in the illustrations. Taro Gomi’s books are a big hit with my granddaughter, age 2. -Recommended by Marilyn Carpenter, Professor Emeritus, Eastern Washington University.