Last week we talked about connecting with literature through music and left you with Un besito más a 2015 song from Mexican brother/sister duo Jesse & Joy that tells the story of what happens when an undocumented family calls the fire department. Although the song is from 2015, it remains relevant four years later. According to the Migration Policy Institute, in 2017, 44 percent of U.S. immigrants (19.7 million people) reported having Hispanic or Latino origins and of those, approximately 10. 7 million are undocumented immigrants (Pew Hispanic Center, 2018). Important to note, the number of undocumented immigrants living in the United States is at the lowest level in a decade. While the book deals with the repatriation of American citizens and not with undocumented immigrants, we drew similarities between the lack of humanity in their treatment. 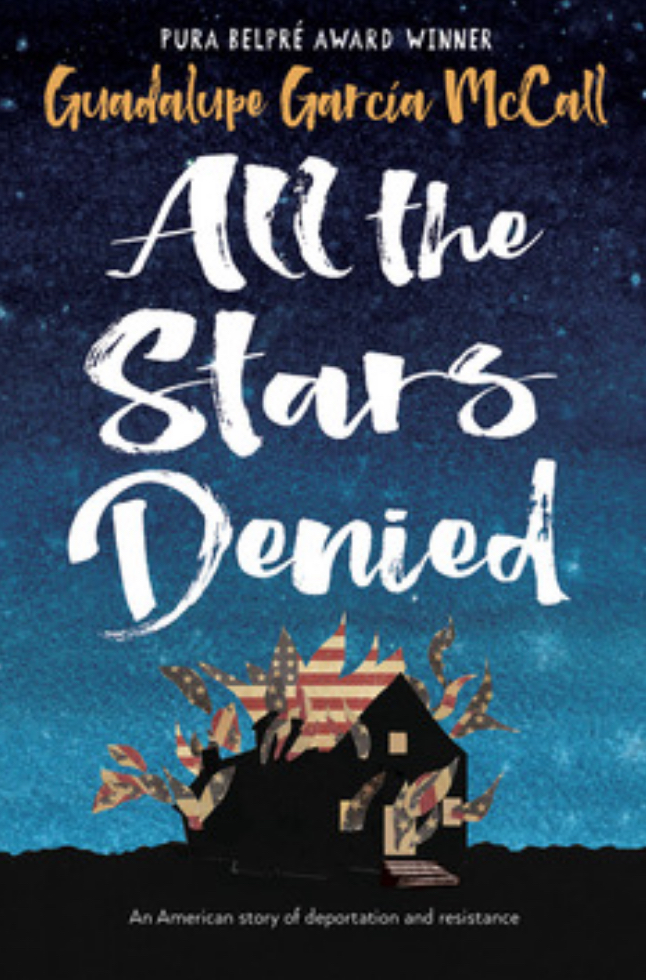 In All the Stars Denied Guadalupe Garcia McCall tells the story of a young Mexican American girl named Estrella. Frustrated by the treatment she and her friends and family receive within their own hometown, Estrella organizes a protest against the treatment and quickly becomes the target of repatriation efforts. Her family’s home is attacked in the middle of the night and burned to the ground. Estrella’s father is separated from the rest of the family, while Estrella and her mother are sent to Mexico, regardless of the fact that they are American citizens. Rosenblatt (1995) suggests that it is essential for educators to help students to have an aesthetic response to the literature they read, meaning that the book “can be enjoyed in itself” (p. 23). We invite you to read along and listen to the songs we linked with the book.

“Housework,” I groaned to myself. “The worst business of all. Because no matter what anybody ever told me, as far as I was concerned, housework was the worst kind of evil ever imposed on women. I never got tired of saying it. And I suspected I would always feel the same way.” (p. 35).

In this excerpt Estrella complains about her overwhelming responsibilities in the home; she must take care of her little brother and help her mother with household issues. As a Muslim woman who comes from similar culture, I genuinely understand Estrella and her frustration. In this piece, she says “I suspected…” which is a signal of hopelessness. Whenever we grow tired of doing a job that we think is unnecessary or only our responsibility as women, we feel overwhelmed. With this idea in mind, it makes the feelings heavier than the feeling when we simply grow tired of the job we want to do. Hence, the conflict in Estrella’s mind is always in the people who are in a similar position as hers. When I read this piece, I remember my frustration and my rejection of doing housework. After some time, I chose to do other things, especially academic studies, instead of helping my mother.

Estrella’s complaints remind me of the song, Ain’t your Mamaby Jennifer Lopez. In this song, Lopez demonstrates several responsibilities that are labeled as ‘women’s work’ by culture and society. She rejects all these unfair responsibilities and shouts “I ain’t your mama!” Although this song is not entirely consistent with the heavy and hopeless feelings of Estrella, it reminds me of two things; other women are in the same position as me, and there is something that can done, even by myself. Thus, it made me think of Rosenblatt (1995) when she writes,”whatever the form—poem, novel, drama, biography, essay—literature makes comprehensible the myriad ways in which human beings meet the infinite possibilities that life offers” (p. 25). There are many ways to overcome our problems. Another point that strikes me during my reading is the part in which Estrella describes her mother. Although she is mad at her mother since she holds her responsible for housework, she admires her.

“That’s what I loved about my mother. Although she might look like a lady, with her beautiful, long black hair curled and styled down her back and her red lipstick perfectly intact throughout the day, she’s not afraid to get her hands dirty. She’s not afraid to fight” (p. 104).

The description of the mother is very consistent with modern beauty standards; which I connected to Tyson’s (2006) discussion of commodification. Commodification shapes mindsets and for some even the tenets of life, not only purchasable goods.

It is hard to guess why the author chose to describe this character in this way, but it can be surely said that this description makes the woman as one of the powerful women characters who are capable of many things. I imagine, if she was depicted differently, the sense of the power and capacity might not be conveyed to the reader. Although she is an immigrant, she is not behind the times in which she is living. Both Estrella and her mother are depicted as strong women which lead me to “This Girl is on Fire” by Alicia Keys. The official video of this song is a story of a strong woman in today’s society. She is doing housework, child care, and professional career, etc. which is very similar to Estrella and her mother. In the video, Keys is dressed up very fancy and wears full make up with ‘red lipstick’. Thus, those similarities are the signals of the strong women in any medium.

Lauren: I chose to focus on Estrella’s feelings, and I chose songs that I felt represented Estrella’s mood throughout the book. For example, I chose Francesca Batteselli’s “The Breakup Song” to represent Estrella’s frustration over the mistreatment of her Mexican American friends and family. When she reached her limit, she chose to stand up to the city leaders who were not treating the people fairly. This song demonstrates Estrella’s desire for power and sense of agency in her circumstances. ‘The American Dream’ seems to be a far-fetched myth in its promise of “equal opportunity for all” (Tyson, 2011, p. 115). Despite being an American citizen, Estrella realizes that her hopes for a better life through hard work and persistence are not options for her as a Mexican American.

Regardless of the hardships Estrella and her mother face following their deportation, Estrella keeps the faith. She never gives up hope of reuniting with her father. The song “Somewhere Out There” by Linda Ronstadt and James Ingram exemplify Estrella’s feelings during her separation from her father. Estrella comes to understand that she will always be limited in society’s eyes by her lower status not only as a Mexican American, but also as a female who has fewer privileges than others.

In closing: This novel would be a wonderful choice for educators to use with their young adult students given the current situation in America. What an excellent way for us to encourage our students to stand firm for their beliefs and to advocate for equitable treatment of all people! This book would provide a springboard into authentic, relevant topics for our students.

Journey through Worlds of Words during our open reading hours: Monday-Friday, 9 a.m. to 5 p.m. and Saturday, 9 a.m. to 1 p.m. To view our complete listings of WOW Currents, please visit our site index.