When people ask me to describe myself, I am hard-pressed to know where to begin. Do I start at the very beginning and talk about all the places I have lived that shaped the way I interact with current life events? Or do I start even further back and talk about my parents and grandparents because they shaped my early values? Or maybe I should start with my husband, sons, daughter-in-laws and grandkids and the way living with them has shaped my views on childrearing, family dynamics, nutrition, etc.? Or should I begin with the life-changing experience of being connected to the work of Worlds of Words? Or I could describe the ways working at a university has shaped the questions I ask or the professional books I read. All of these cultures I belong to have molded me into the person I am. I see myself as multicultural–a person who belongs to multiple groups who have shaped (and continue to shape) my beliefs and values that in turn impact the way I deal with life events. 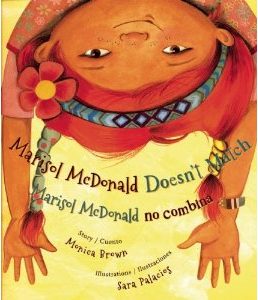 One of my favorite book characters who exhibits this same multicultural view of herself is Marisol McDonald (Marisol McDonald Doesn’t Match by Monica Brown and Sara Palacios). While others see her as a person who doesn’t “match” because she does not follow societal patterns, she sees herself as a person who loves all the parts of her Scottish/Peruvian/American background. So she eats peanut butter burritos, wears colorful dresses with her Peruvian hat (a gift from her grandmother) and throws in Spanish words when they express her thoughts better than English words. Marisol embodies the third descriptor of interculturally competent people: folks who see themselves with multicultural identities. This week we will look at several of the titles on the USBBY Outstanding International Books 2019 list list that serve as examples of multicultural identities.

Auntie Luce’s Talking Paintings by American author Francie Latour and illustrated by Canadian Ken Daley
I was mesmerized the first time I read this book, an amazing combination of extraordinary writing, story arc and illustrations that draw me into a young girl’s exploration of who she is. Based loosely on the author’s experience of being painted by Haitian artist Luce Turnier, the story follows a visit to Haiti by the American protagonist to her artist aunt who paints Haiti, its history, colors, sights and sounds. As they talk about family roots and stories, the girl begins to see both the glorious and sad history that makes up the Haitian story. As I watched the girl gain a richer perspective of her Haitian-American history, I was given a glimpse of Haiti that I do not see in the media. The book expanded my view of the struggling island by layering the images of earthquakes and poverty with images of color, success and warmth.

More important for this week’s focus, the girl begins to understand the cultures that have been woven together to make her who she is. Through the verbal words and visual art of her aunt, the girl begins to see herself as multicolored rather than monochromatic. For me, the highlight of the book is the painting her aunt creates of the young girl. It is an amazing array of colors that show all the different parts of her heritage. The girl realizes “In my face, I see colors I’ve never seen in a mirror–the caramel in my great-grandmother’s skin and the deep berry in my grandfather’s.” When the girl still struggles to put her Haitian and American roots together, her aunt interprets the painting for her: “Try not to think of it as one or the other, but both together…. You were born outside, that’s true. But you hold this place in your skin, deep in your bones. Colors do not lie.”

The next three books relate to the concept of multicultural identities in a different way. Rather than focus on the many cultures that shape a person, the following titles show characters who resist being seen as monocultural. They work against the stereotypes that are put on them.

As I grew up moving around cultures, I dealt with the limits that stereotyping put on me. I had people make assumptions about me because of where I am from and my parents’ employment. I learned the hard way to actively resist those profiles. That is what the characters in the following books do.

Go Show the World: A Celebration of Indigenous Heroes by Canadian Ojibwe musician and politician Wab Kinew and illustrated by Canadian Joe Morse
Author Wab Kinew is a member of the Ojibways of Onigaming First Nations. He is also a hip hop artist, rapper and a politician in Manitoba. He defies stereotypes by what he has been involved in! He brings those interests together in the stories of 13 people who did not let cultural images stop them from doing something extraordinary with their lives. Profiles include well-known figures like Sacajewea, Crazy Horse, Tecumseh and Jim Thorpe, and also lesser known historical figures like health reformer Dr. Susan LaFlesche Picotte, World War I sniper and scout Francis Pegahmagabow, and Trail of Tears survivor and cultural preserver Tee-Wau-Zee. Important for contemporary readers, Kinew and Morse also profile Native Americans and First Nations people who are defying stereotypes today: astronaut and Chickasaw band member John Herrington, actor and physician Evan Adams, water polo gold medalist Waneek Horn-Miller, Olympic hockey player Carey Price, and Métis author Beatrice Culleton Mosionier.

Go Show the World profiles thirteen Native American/First Nations people who resisted limitations. The rap song lyrics and vibrant illustrations work together to communicate “you are people who matter” to readers who may feel limited by the cultural stereotypes placed on them by society.

Dodger Boy by Canadian author Sarah Ellis
Set in 1970 Vancouver, two teenaged friends, Charlotte and Dawn, are determined not to be typical teens, and they work hard across the novel to resist stereotypical teen behavior. But when Charlotte’s Quaker family takes in a Vietnam War draft dodger from Texas, all the preconceived notions of draft dodgers and Texans kick in for the two girls. Gentle and hardworking, kind and well-mannered, Tom Ed defies stereotypes. He engages Charlotte in a lot of conversations that challenge her notions of what people are like because of where they grew up. He also helps her learn to stand up for her English teacher who is at risk of being fired because of a book she had her students read. Across the novel both girls discover that the way they envisioned a person does not always fit the way they are. 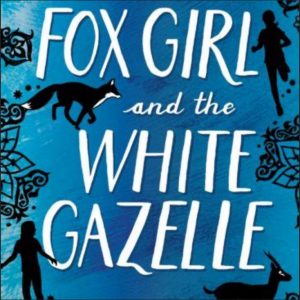 The Fox Girl and the White Gazelle by Scottish author Victoria Williamson
The lives of Scottish-born Caylin, Syrian refugee Reema, and a wild mother fox who is injured and struggling to care for her family become intertwined. Caylin has lost her grandparents and, in a role reversal, becomes the caretaker for her alcoholic mother. She resorts to stealing food so that she and her mother can survive. Caylin lives in the same apartment building as Reema, a teen refugee from Syria, who is struggling with the refugee images that Caylin and other people place on her. Meanwhile, in a vacant lot by the apartment, an injured mother fox struggles to keep her babies safe. Both teens discover the fox and try to help her by bringing food to the den. When the girls discover the other person’s efforts to help the fox, they go through feeling of distrust but eventually decide to work together to help the fox.

The novel is written in alternating voices giving the reader the opportunity to hear the struggles and thought processes of each girl as they work through first impressions and stereotypes they have of each other. Eventually the girls develop a tentative friendship that expands as they start running together on the school track team. The stereotypes they had of each other are shattered as they work and run together.

All of these titles challenge the way we “peg” the characters because of where they lived, their ethnicity or some other culture that they belong to. These stories encourage readers to see identity in layers—not in simple categories, and to see people as complex, members of cultures with lots of diversity.

Next week—living “in” the borderlands between cultures!