Worlds of Words in the University of Arizona College of Education launches “Visual Narratives: Connecting Across Languages and Cultures”, an exhibit of global picturebooks that tell stories primarily through visual images. The exhibit is inspired by the “Silent Books, from the World to Lampedusa and Back,” a traveling exhibit of global books from the International Board on Books for Young People. The exhibit is on display now through December 2019 with an open reception from 3 to 4:30 p.m. on July 25. 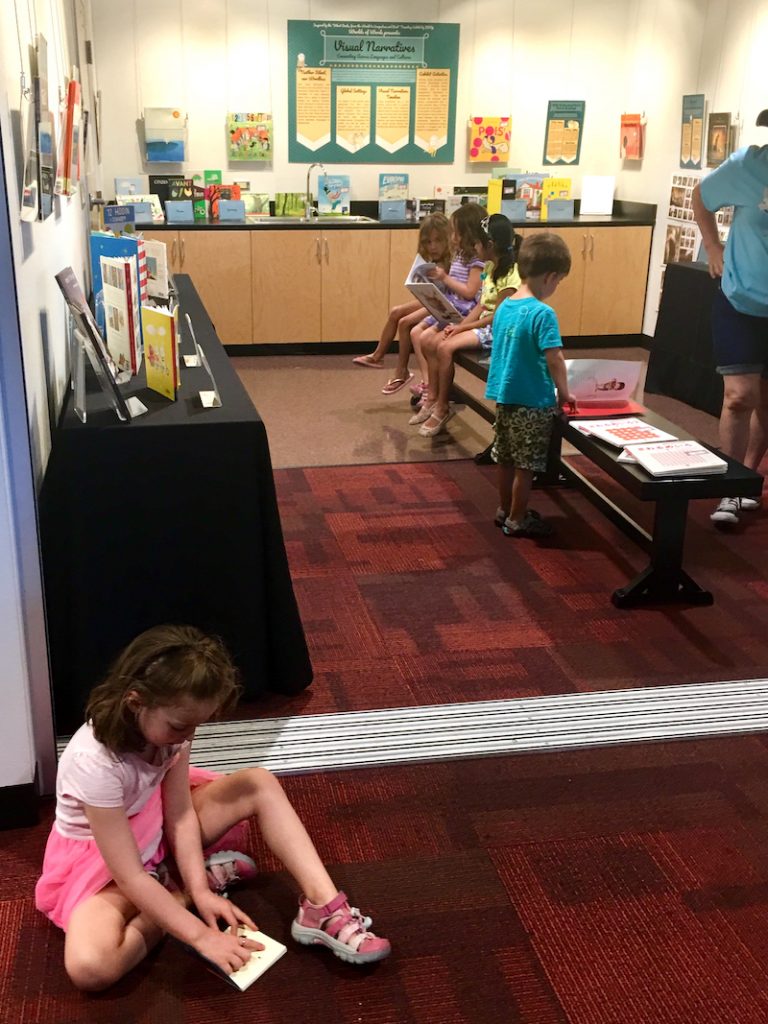 Second and third graders from UofA’s Fusion Camp engage with books from around the world that are part of the “Silent Books” exhibit from the International Board on Books for Young People, now on display in Worlds of Words as part of their Visual Narratives exhibit.

“Even though our exhibit is based on the IBBY ‘Silent Books’ exhibit, we decided to call ours ‘Visual Narratives’ rather than ‘silent’ or ‘wordless,'” says Rebecca Ballenger, Associate Director for WOW. “Visual Narratives more precisely conveys how a series of powerful images can capture the range of human emotion and deeper meanings to tell a story, using few or no words except in the title.” 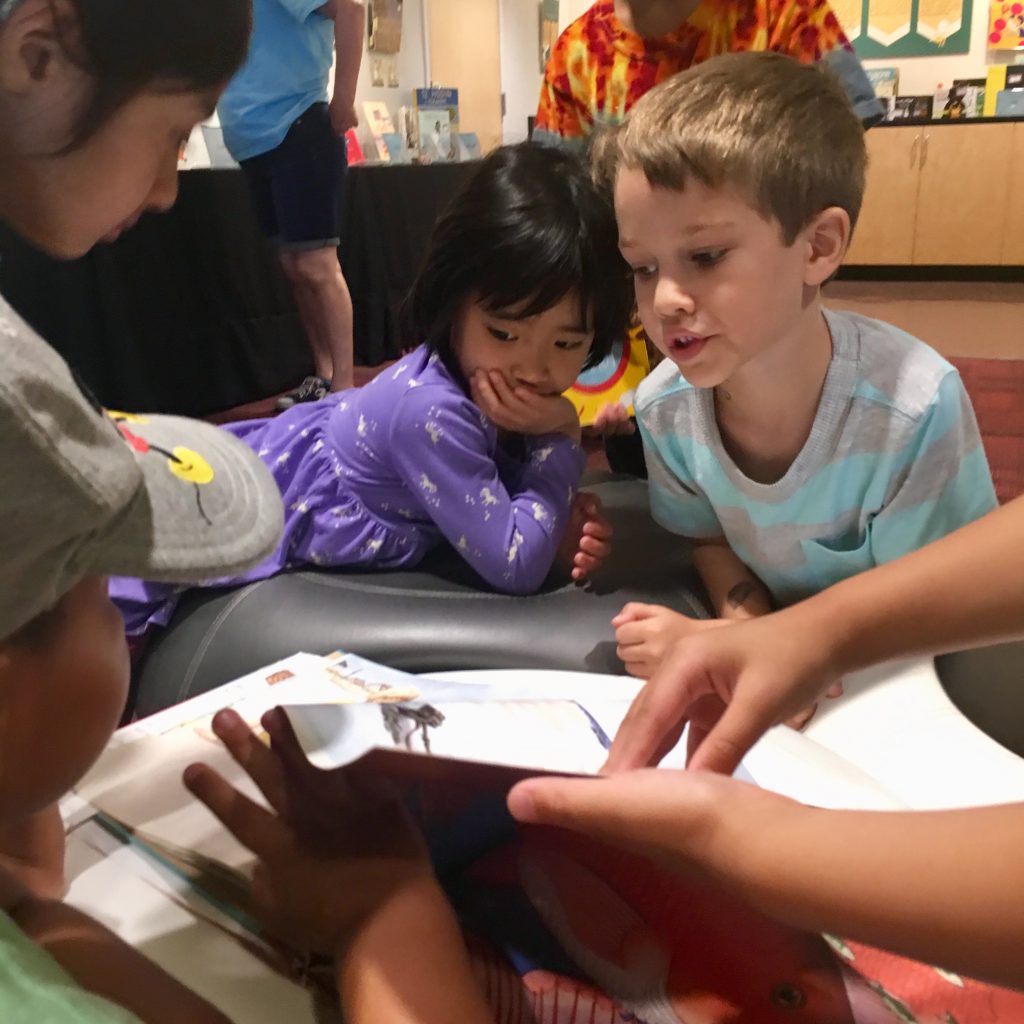 UofA Fusion campers from the kindergarten/first grade group read through David Wiesner’s “Flotsam,” which takes readers on a surreal journey through an underwater world. Flotsam is one of dozens of books on display at Worlds of Words as part of their Visual Narratives exhibit.

IBBY’s Silent Books exhibit was created in 2012 in response to the waves of refugees from Africa and the Middle East arriving on the Italian island, Lampedusa. The project involved creating the first library on Lampedusa for local and immigrant children as a way to bridge cultures and languages. These books are on display in addition to books from the WOW global collection. The stories feature characters from around the world, often depicting multiple places, themes and issues. Five activities invite visitors to engage with the books on a deeper level, such as recalling acts of kindness, creating dialogue for the characters and analyzing problematic depictions.

“Visual narratives provide a space for viewers to bring their experiences and languages to create stories that range from playful to serious and from joyous to heartbreaking. Although some are directed to young children, many are sophisticated and engage adults as well as children,” says Kathy Short, WOW Director and professor of Teaching, Learning and Sociocultural Studies. 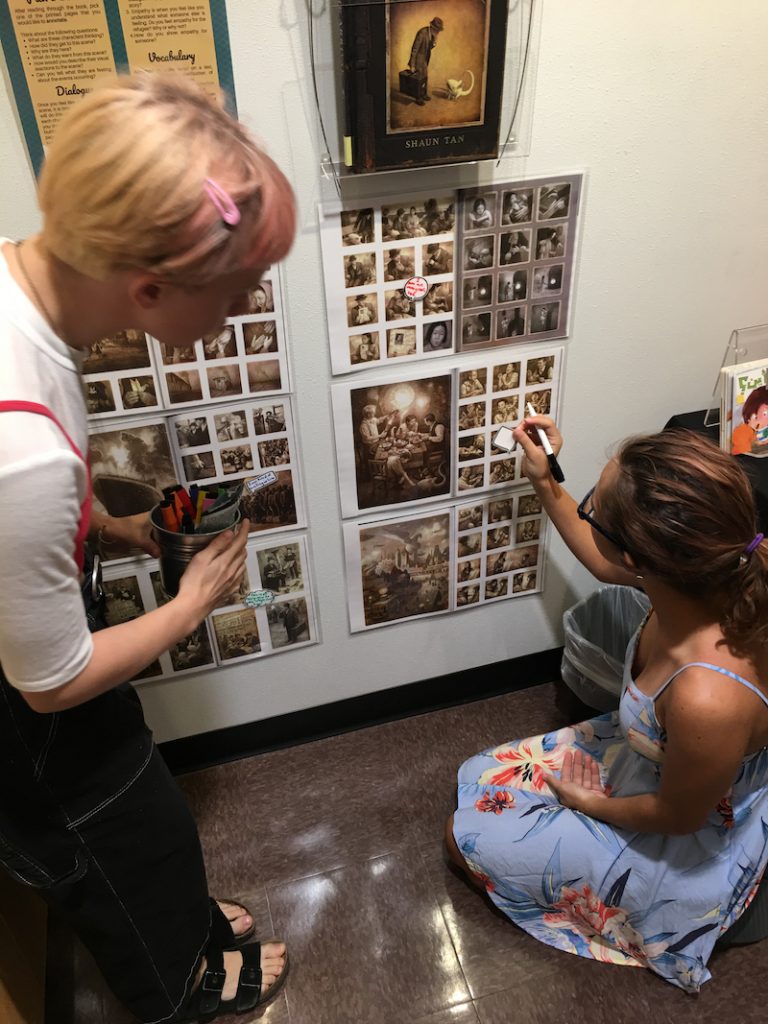 Two Tucson teens imagine what the characters in Shaun Tan’s “The Arrival” may think or say in one of the invitations provided by Worlds of Words in their new Visual Narratives exhibit, on display through December. Photo by Annika Hanson.

This display of visual narratives will be available free to the public from July 1 to December 20 at Worlds of Words in the College of Education, Room 453. To schedule a group tour, complete our online booking form or email wow@email.arizona.edu. RSVPs to wow@email.arizona.edu are preferred but not required for the Visual Narrative reception.