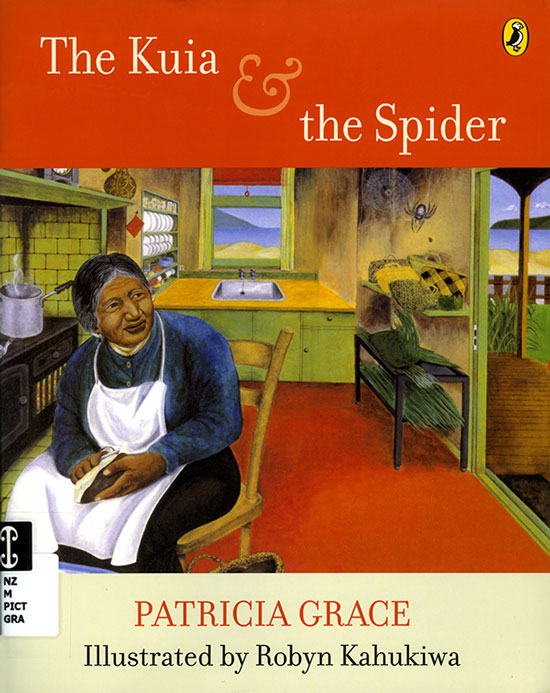 In this post I’d like to share two of my favorite New Zealand picturebooks. One is an absolute classic published back in 1981, The Kuia and the Spider/Te Kuia me te pungawerewere by Patricia Grace and Robyn Kahukiwa (Penguin), and the other, The Bomb/Te Pohū by Sarah Cotter and Josh Morgan (Huia, 2019) is the 2019 New Zealand Children and Young People’s Picturebook of the the year and overall book of the year. They span an era in New Zealand children’s publishing which has seen the increase of local authors being published, and an era during which there has been a Renaissance of the Māori culture and language.

The Kuia and the Spider is a story of a grandmother or Kuia who is a traditional weaver living in a house by the sea, and a spider who lives in the corner of her kitchen. They talk to each other and argue about whose weaving is best, and when their grandchildren visit, they argue about whose grandchildren are best. My favorite line is the last one, which plays with the fairy tale format.

A student teacher once said to me she would not read this to children because it was about a negative thing, arguing; but it does it in such a delightful way, pointing out the respect there is between the Kuia and the Spider. Patricia Grace (DCNZM, Tribal affiliations, Ngāti Toa, Ngāti Awa, Te Ãti Awa) has written several other children’s books but has also written powerful adult novels (my favorites Potiki, 1995, University of Hawai’i Press; Baby No Eyes, 1999, University of Hawai’i Press; and Chappy, 2015, Penguin). Robyn Kahukiwa (Tribal affiliations, Ngāti Porou, Te Aitanga-a-Hauiti, Ngāti Hau, Ngāti Konohi and Whanau-a-Ruataupare) is a well-known visual artist who also illustrates. There are several notable aspects about The Kuia and the Spider/Te Kuia me te Pungawerewere. One is that it may be one of the first New Zealand picturebooks wherein both author and illustrator are Māori; the second being that at the same time it was published in English, it was published in Māori in a separate edition, Te Kuia me te Pungawerewere. This was not usual in the early 1980s, but has become relatively common practice since then because of the development since the 1980s of a whole educational system being delivered in Te Reo Māori, from kindergarten through university. The children in this school system need access to resources both for school and home, and so several publishing companies now produce two versions of books they publish. 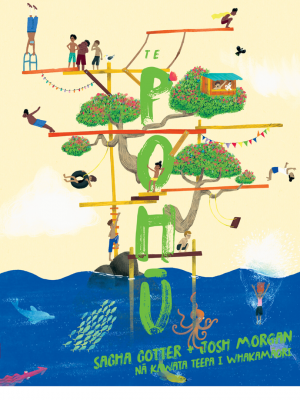 Fast forward nearly four decades to the New Zealand Book Awards for Children and Young Adult ceremony, held in the capital of New Zealand, Wellington, at the National Museum, Te Papa. The Best Picturebooks award and then the ultimate overall Margaret Mahy Award for the best book of the year is won by a husband and wife author illustrator team, Sasha Cotter and Josh Morgan for their book published in two versions, English The Bomb and in Māori, Te Pohū. It was a fabulous moment to see them on stage with their new little baby, completely overwhelmed. Their book was published by Huia publishers, a Wellington-based publishing house that specializes in publishing stories from Te Ao Māori–the Māori world, and from Pasifika communities (communities from the range of Pacific countries near New Zealand including Samoa, Tonga, Fiji and the Cook Islands).

In fact, I understand it was Huia who first introduced Sasha and Josh to each other when they wrote and illustrated their first book together, The Keys/Ngā Kī (2015). In The Bomb/Te Pohū, a boy living in a seaside community tries to work out how to do a really good bomb (or cannonball) off the wharf. In his community, how well you can bomb is a respected skill. He consults many people in the community who each impart a gem of wisdom, but when he tries to put it all together, it is a bit of a flop. Then he listens to his grandmother who advises him to be himself, and, with this in mind, he is able to do an amazing bomb. The bright and detailed illustrations capture the feel of many small seaside communities in New Zealand and the characters who live there, and the writing is perfectly weighted with occasional internal rhyme.

These two books tell the story of a large distance traveled in New Zealand publishing about what publishing norms are, regarding the use of indigenous language, and what is valued and feted. The Kuia and the Spider led the way. The Bomb/Te Pohū and the success it has had shows us how far New Zealand publishing has come. This is not to say there isn’t further to go. In a small Western country of 5 million, libraries in New Zealand are understandably dominated by English language books published overseas, many of them excellent, and all of them windows into the rest of the English speaking world. Children in New Zealand continue to need more books like the two reviewed here, mirrors of life in New Zealand using language which reflects New Zealand identity.