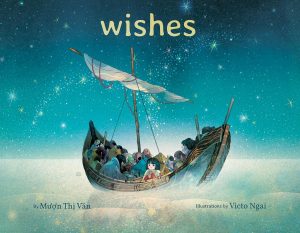 Wishes is a compelling story about a Vietnamese family’s escape to find a new home across the world and the impact of their journey on one of the youngest children. The story is told through the young girl’s experiences and the wishes made by inanimate objects such as the rice packets that wishes they were deeper and the clock at the departure that wishes it was slower. The story is inspired by the author’s autobiographical accounts of her personal fears and experiences as a young immigrant and refugee in the 1980s when she and her family were forced to leave Vietnam. The story is seamlessly told in prose with beautiful illustrations resembling each wish along her journey. Each illustration and wish leads to her final wish—for a place to call home.

As of this writing, there are at least 2.2 million Ukrainian refugee children forced to flee their country due to Russia’s nonstop attacks on their homeland. In addition, more than 1.8 million asylum-seekers coming from countries such as Guatemala, Haiti, Honduras and Venezuela are currently residing at the Mexico-U.S. border with increasingly bleak opportunities for families to resettle in the United States. Those who have entered the United States without visas are deported each day by the hundreds—returning to a country in an economic and political freefall with violent gangs holding much of it under siege.

Wishes provides a shared experience for any children who have had to leave their home and their friends to escape the ravages of war, gang violence and civil unrest to start a new life. This picturebook presents a particularly important story that should help young people better understand the plight of immigrant children as they may become members of their school community. In the coming school year, one school district in Tucson reported that more than 500 new refugee families will have children placed in its schools. Wishes gives parents and teachers an exquisite text that develops their children’s understanding of the challenges of migration and displacement. -Recommended by Deborah Dimmett, University of Arizona

Each month a committee of Worlds of Words advisors recommends a book published within the last year. Our hope is to spark conversations on our website and on social media about the book that expand global understandings and perceptions. Please join us by leaving a comment. You can also share your thoughts with us by using the hashtag #WOWRecommends on social media. Check out our alphabetical listing of all the books featured in WOW Recommends.