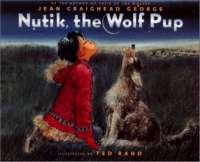 In an Eskimo village at the top of the world lived a little boy whose name was Amaroq. Named for the great wolf leader who saved the life of his big sister, Julie, Amaroq loved wolves as much as his big sister did.

One day Julie brings home a sickly wolf pup named Nutik for Amaroq to feed and tend. “Don’t fall in love with Nutik,” Julie warns, “or your heart will break when the wolves come to take their pup home.” Amaroq feeds and cares for Nutik, and soon the fuzzy little pup is romping and playing and following Amaroq everywhere. Amaroq and Nutik become best friends, but soon it’s time for Nutik to rejoin his wolf family. Will Amaroq be strong like the great wolf leader he was named after and be able to let Nutik go?

In this adventure-first told in Julie’s Wolf Pack, sequel to the Newbery Medal-winning Julie of the Wolves Jean Craighead George brings the Arctic world of Julie and her family to a picturebook audience.

One thought on “Nutik, The Wolf Pup”