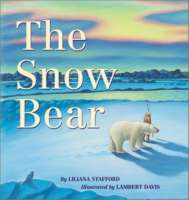 “The bear came into town in the Autumn to feed at the dump. Her cubs had been killed by hunters and she was weary. Only Bruun saw her plight…” So begins a friendship between two unlikely companions ­ Bruun, an Inuit Eskimo boy, and a snow bear from the wild. As they spend the winter out on the sea-ice together, Bruun learns the ways of the polar bear. But when spring comes, he must return home to the ways of his own people. What will happen, years later, when the two meet again and Bruun has become a hunter?