Eleven-year-old Peijing and her family are adapting to their new life in Australia, but when cracks in her family life start to appear, she must find a way to cope with the uncertainties of her own little world and figure out where she fits in. 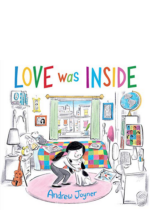 A little girl grows stronger as she finds ways to stay connected to the people she loves during the pandemic. 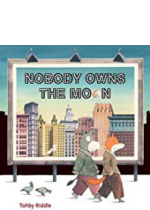 Clive Prendergast is a fox who lives successfully in the city, in a one-room apartment in a busy part of town. Humphrey is a donkey who works odd jobs and doesn’t always have a fixed address. Nobody Owns the Moon is the story of their friendship. This modern classic picture book is a perfect marriage of text and image and timeless in its message of belonging and community.

Andy and Terry live in a 130-story treehouse. (It used to be a 117-story treehouse, but they added another 13 stories.) It has a soap bubble blaster, a time-wasting level, a 13-story igloo, the GRABINATOR (it can grab anything from anywhere at any time), a toilet paper factory, and an extraterrestrial observation centre for observing aliens.
As it turns out, though, it’s Andy, Terry and Jill who are being observed―and then abducted―by a giant flying eyeball from outer space! At first they’re excited to be going on an intergalactic space adventure, but when they arrive on Planet Eyeballia, they discover it’s not at all a friendly place. Will the gang be able to escape and get back to Earth and write their book before time runs out?

Meixing Lim and her family have arrived at the New House in the New Land. Her parents inherited the home from First Uncle who died tragically and unexpectedly while picking oranges in the backyard. Her mama likes to remind Meixing the family never could have afforded to move here otherwise, so she should be thankful for this opportunity.
Everything is vast and unknown to Meixing in this supposedly wonderful place. She is embarrassed by her secondhand clothing, has trouble understanding her peers, and is finding it hard to make new friends. Meixing’s only solace is a rundown greenhouse, that her uncle called his glasshouse, at the far end of her backyard that inexplicably holds the sun and the moon and the secrets of her memory and imagination.
When her fragile universe is rocked by tragedy, it will take all of Meixing’s resilience and bravery to finally find her place of belonging in this new world.

Abandoned as a baby in a forest to be eaten by Shadow Creatures, twelve-year-old Bo and his pet fox embark on a quest to return the wish-granting Stars to the Ulvian sky before the Shadow Witch can steal the star magic.

When a foreign exchange student comes to live with a typical suburban family, he brings with him a boundless sense of curiosity — and a stream of unexpected questions (which his hosts are never quite sure how to answer). But when the moment comes to say good-bye, a beautiful surprise awaits, and a gift the family will never forget.

Celebrate young climate change activists in this charming story about an empowered girl who shows up, listens up, and ultimately, speaks up to inspire her community to take action against climate change. After attending a climate march, a young activist is motivated to make an effort and do her part to help the planet… by organizing volunteers to work to make green changes in their community, from cleaning a lake, to planting trees, to making composting bins, to hosting a clothing swap and more! Here is an uplifting picture book that is an important reminder that no change is too small–and no person is too young–to make a difference.