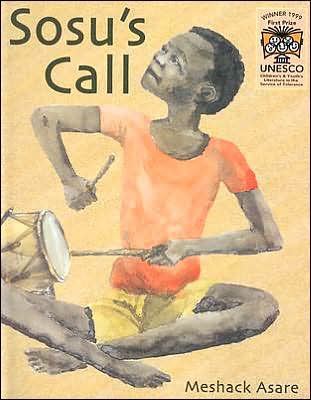 Sosu lives with his family on a small island between the sea and a lagoon and all he wants is to feel like a normal boy. “What use is a boy without a pair of good strong legs?” His dad does all he can to include Sosu in the routines of the village, but the elders worry that his presence will displease the Lagoon Spirit. Sosu can not walk to school and so stays home and plays with Fusa, the family dog, while his family goes off to work or school. Sosu prepares lunch for his brother and sister when they return from school and they teach Sosu everything they learn at school. When a storm threatens to destroy the village, Sosu has to think of a way to call everyone back as the only people left at home are the elderly and the very young. He remembers the drums and, with Fusa at his side, Sosu finds the strength and courage to drag himself to the shed where the village drums were kept. He beats out a loud warning that brings the village running back to rescue those left behind. Sosu’s stature rises as media attention puts him and Fusa in the spotlight, and with the attention comes a wheelchair that allows Sosu to attend school.

The story presents a difficult life of growing foods and fishing for survival. There are few “outside influences” apparent throughout the story until the end when video cameras and microphones appear. Why does it take a heroic act to find a wheelchair that will totally change the quality of life for this child? Yet these situations exist everywhere — children with no access to good health care, communities with little or no communication systems to call for help.

The authenticity of this story is difficult to assess as no specific place or people are named. The story was originally published in 1997 in Ghana and is set in a nameless West African village. Meshack Asare is a popular African children’s author who lived in Ghana for many years, but now resides in Degenfeld, Germany. This book won the 1999 UNESCO First Prize for Children’s and Young People’s Literature in the Service of Tolerance.

What is authentic is the ease with which people assume that a disability renders a person unable to contribute to the community at large. Despite the ill feelings sent his way, Sosu’s thoughts were not of himself, but of the other members of his community. This is what motivated his actions. It is human nature to need to belong to a group. Sosu found a way that others could recognize his belonging. Other titles in which main characters, despite a challenging disability, contribute to the communities in significant ways include The Printer (Uhlberg, 2003), Kami and the Yaks (Stryer, 2007), and Hurt Go Happy (Rorby, 2007).