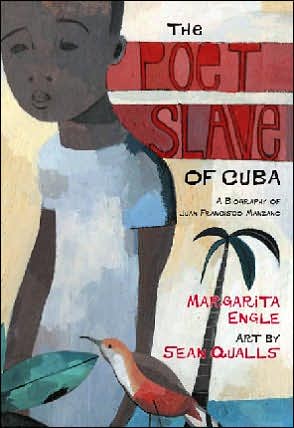 With haunting images and the simple text that reveals a complex life and historical era, Margarita Engle has created a passionate biography for those familiar with Juan Francisco Manzano and for those new to his work. Juan’s story is that of a child born into slavery in 1797. Denied an education, this Cuban poet naturally used poetry as the vehicle “to find beauty and goodness in a world filled with hideous cruelty.” As a Cuban-American writer, Engle’s own language and work as a poet give authentic voice to this poet of the Cuban people. Through her choice of words and phrasing, so reflective of Juan’s own, we come to know this poet’s mind and soul. At the end of the biography, she provides several verses written by Juan in the original rhymed, 19th century Spanish, and she speaks of her efforts to retain the mood and meaning in her translation rather than meter and rhyme. Her knowledge of both this era in Cuban history and of the life of Juan is evident as she created a story told from multiple perspectives — Juan and those with whom his life intertwined. The cruelty of slavery, in a scenario perhaps new to the reader, is powerful. This is in keeping with Engle’s brief historical note in which she shares that poetry has always been powerful to the Latin American people — so powerful that the government often regarded poets as dangerous. Engle describes her own work when she says, “This perception has arisen because so many poets choose to describe simple truths that affect both the emotions and the social awareness of readers and listeners.” In the early 19th century, people gathered in homes to hear Juan read his images of hope and he was arrested due to his ability to influence people and the perception he might stir up a rebellion among slaves.

Writers from many aspects of the Latino culture have praised the imaginative, passionate brilliance of this story. With such highly regarded names acknowledging how this aspect of the Latino culture has been portrayed, the “insider” perspective is acknowledged multiple times. This book has also been shared with Cuban American’s who are versed in the historical events of their country although now residing in the United States. They believe that fellow countryman, Engle, has well portrayed this significant voice of the Cuban people — a voice that continues to be held up in admiration due to the ongoing suppression from which many escaped in the 20th century. Because of strict censorship by the Cuban government at this time, Juan was unable to write his own autobiography. Centuries later Engle has given an authentic perspective and voice to his life story through this highly readable and moving book. For further insight into Cuba’s struggle for independence, Engle has created a poetic history in The Surrender Tree, Poems of Cuba’s Struggle for Freedom (2008). Yet another point of inquiry might be that of Latin American poets who were also political figures. When I Was a Boy Neruda Called Me Policarpo (Delano, 2006) and The Poet King of Tezcoco, A Great Leader of Ancient Mexico (Serrano, 2006) are titles that can continue such an exploration.