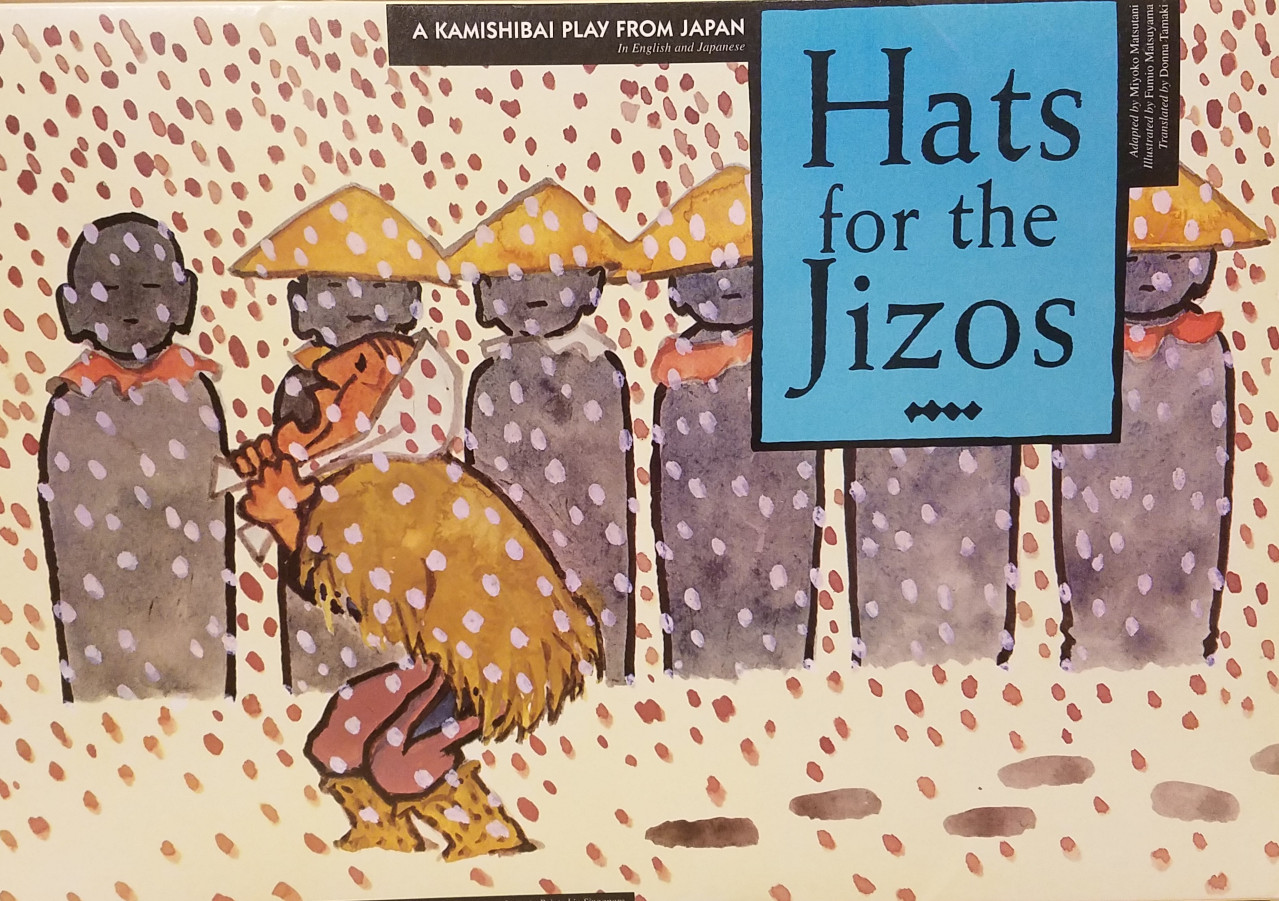 Kamishibai (ka-mee-she-bye) is a traditional Japanese form of visual storytelling that literally means paper (kami) play at a theater (shibai). This unique form of Japanese storytelling is currently being utilized as a means for teaching history, social science, foreign language, and Japanese culture in educational settings in the United States. Kamishibai are usually larger than the average picture books (the standard size is 15”x11”) and most kamishibai stories consist of 12 to 16 sturdy storyboards. Unlike picture books in which illustrations and texts are printed on the same pages, kamishibai illustrations are printed on the front of the storyboard, and on the back of the board is the text to be read. The kamishibai audience looks only at the illustrations while a storyteller reads the text. During story time, the storyteller holds a stack of kamishibai storyboards and proceeds by pulling out the front storyboard and sliding it to the back of the stack, reading the text of the next picture that has just appeared to the audience. The storyteller dramatizes a story by manipulating the pace of sliding the storyboards slowly, quickly, or even stopping in the middle. Moreover, he/she creates theatrical effects by changing voice tones as well as using onomatopoeia, which is heavily used in Japanese literature.

Hats for the Jizos tells the story of an old man who goes to town on the last day of the year, hoping to sell a piece of cloth so he can buy special food to celebrate the New Year with his wife. No one is interested in buying the cloth, and so he exchanges his cloth for straw hats another man is trying to sell. On the way home, it starts snowing. The old man sees six stone statues of the deity Jizo (jee-zoh), a guardian of children, in the heavy fall of snow. He feels sorry for them because they look cold and don’t have any offerings of food for New Year’s Day, so he covers their bare heads with his straw hats and gives his own scarf to the sixth Jizo. Back at home the old man and his wife plan to celebrate the New Year with the modest food they usually eat, however, on New Year’s Eve, they are mysteriously rewarded with abundant food and gifts for his unselfish generosity by the deity Jizos.

This kamishibai story can be read alongside Kamishibai Man (Allan Say, 2005), in remembrance of a time in Japan when professional kamishibai storytellers were common street entertainment. Reading the two stories together provides children with an opportunity to experience this culturally unique form of visual storytelling and understand its role in Japanese culture. They can also potentially explore kamishibai as a story form, the deity of Jizos, and cultural ways of celebrating New Year’s Day.

Kamishibai is a wonderful addition to literacy activities in classrooms. It can be a meaningful tool for developing children’s reading, writing, speaking, listening, research, and art skills. For example, teachers can encourage students to create their original stories as drawing illustrations, so that they strengthen sequence skills and understand a logical progression or sequence to writing stories.

The author of Hats for the Jizos, Matustani, grew up in Japan and is a writer of children’s literature. She has retold many Japanese folktales and published the stories in the form of kamishibai. The illustrator, Matsuyama, is a Japanese artist of cartoon and children’s literature. The translator, Tamaki, lived in Kyoto, Japan for over 30 years, working as a teacher of English and as a translator. She has been actively working to make English-language kamishibai stories available to U.S. educators at Kamishibai for Kids (www.kamishibai.com), which provides educators with resources through an up-to-date guide of kamishibai.

The International Kamishibai Association of Japan (IKAJ) is a global union of educators from all over the world who collaboratively study kamishibai. They promote resources for literacy development and cultural studies. The IKAJ website provides teaching resources and information of educational development at www.geocities.jp/kamishibai/index-e.html.

WOW Review, Volume III, Issue 3 by Worlds of Words is licensed under a Creative Commons Attribution-NonCommercial-ShareAlike 4.0 International License. Based on work at https://wowlit.org/on-line-publications/review/iii-3/