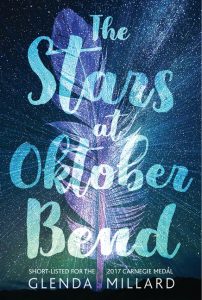 When Alice was 12 years old, she was brutally attacked, leaving her so badly wounded that the question of her ability to communicate—and develop cognitively—came into question. Now, three years later, and on the verge of becoming “grown,” Alice feels her life is filled with many silences as her family continues to recover from the trauma that not only changed Alice, but her family as a unit. She lives with her brother Joey, their dog Bear, and Gram, who loves and guides Alice and Joey since their mother deserted them years earlier. The three live a rich life on the edge of their Australian town, hidden from view most of the time.

Joey, who is 14, goes to school, but Alice, with her cognitive damage, is not expected to attend. Yet, Alice keeps her “book of flying” and learns from the knowledge Joey shares with her from school. Eventually, Alice’s poetry must fly from her book and into the world. She begins to secretly post her poems throughout her town hoping to connect with the world. One evening as he is out running from the memories of his traumatic past, 16-year-old Manny, a refugee from an African nation torn by war, sees a pale girl with flaming red hair on the roof of what must be her house—a house on stilts in the treetops that he had never noticed. Mesmerized by her bravery, yet fearful she will fall, Manny watches as Alice creates an image that becomes burned in his mind—an image of a girl throwing her poems to the wind.

The Stars of Oktober Bend is a beautiful story of love between two young people who learn to move beyond their painful pasts with each other’s help. Yet, this narrative is also about the love within two families and what family members are willing to do to help Alice and Manny grow and survive the trauma each has experienced. Filled with poetry and a richness of language, readers will also become enamored with Alice and Manny as they experience first love and its wonder.

Not only is this a terrific narrative with a compelling plot and authentic characters, it is filled with an amazing use of language found in Alice’s storytelling and her book of flying. Alice’s ability to communicate her thoughts morphs across the novel from stilted sentences to complex thoughts, reflecting the healing she experiences through relationships with Manny and her family. The richness of language is magical and profound, and would make a powerful model for adolescents as they learn to communicate through their own writings and with their own unique voices.

Two pieces of fiction that would complement this text include The Sun is Also a Star by Nicola Yoon (2016) and Tell Me Three Things by Julie Buxbaum (2016), both of which address love stories between unlikely couples in unlikely circumstances. Other books that address trauma and how characters overcome could include This Thing Called the Future by J.L. Powers (2011), and the riveting fantasy, Children of Blood and Bone by Tomi Adeyemi (2018).

Glenda Millard lives in Australia, and is the author of numerous books for children and young adults. Her other works include A Small Free Kiss in the Dark (2010), which won an award in Queensland, Australia and the picturebook Once a Shepherd, (2014) which was on the USBBY’s Outstanding International Books List for 2015. More information on Millard can be found at: https://glendamillard.com/