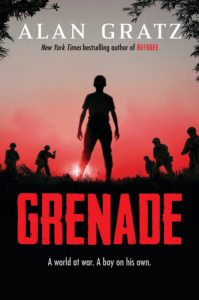 It’s April 1, 1945, and World War II has reached the shores of Okinawa where 14-year-old Hideki Kaneshiro lives with his family. When an American bomb explodes near his school, Hideki and his classmates are immediately forced into the Blood and Iron Student Corp to defend Okinawa and fight for the Japanese Army. The boys are each handed two grenades and told to use one to kill Americans and the other to kill themselves. At the same time, Private Ray Majors, a newly enlisted 18-year-old American Marine from Nebraska, is on an amphibious carrier with other troops headed for the beaches of Okinawa. He too has grenades and other supplies and is advised by a Corporal to shoot the Japs before they shoot him. Hideki and Ray are both inexperienced in war, afraid of the unknown, and desperate to survive. They each experience the trauma of war as they battle their way across the island, managing to stay alive through multiple ambushes and traps. Eventually, during a battle they come face-to-face and the choices they each make in that instance results in changes that can’t be undone.

In this riveting story, Alan Gratz realistically describes events of World War II’s Love Day and its devasting effects. Told in Hideki’s and Ray’s alternating voices, readers feel the trauma they each experience both physically and emotionally. They wrestle with Hideki over the realization that the Japanese military abandoned the Okinawan people, leaving Okinawa as a sacrificial stone in their overall battle plans. Readers also grapple with Ray’s attempts to understand the relationship between the Okinawan civilians and the Japanese military. Gratz portrays the trauma of war and its effects on people, particularly innocent civilians in real and honest ways. Moments of hope emerge, though, as when Hideki and his sister save a group of children and when Hideki overcomes what he believes is a family curse by demonstrating multiple acts of courage.

For a more general exploration of trauma related to World War II, Grenade might be paired with Prisoner B-3087 (Alan Gratz, 2013), The War I Finally Won (Kimberly Brubaker Bradley, 2017), and Sachiko: A Nagasaki Bomb Survivor’s Story (Caren Stelson, 2016). To further consider the trauma of World War II from two perspectives, Grenade could be paired with When My Name was Keoko (Linda Sue Park, 2012).

Alan Gratz spent his early life in Knoxville, Tennessee, and later majored in creative writing at the University of Tennessee. Since then he has written close to 15 books for young readers. In 2010, Gratz spent two months in Japan as a writer in residence at a school after which he lived with a Japanese family. While there, he met a man who had been a boy in Okinawa the day the Americans invaded. The man told Gratz how the Japanese army pulled him and other middle school boys out of school, gave them grenades, and told them to go kill Americans. Through research he found similar stories which led to him writing this book. Gratz currently lives with his family in Western North Carolina. More information about Gratz can be found on his website: www.alangratz.com.