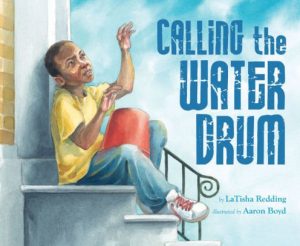 Henri is a young boy living in Haiti with his mother (Manman) and his father (Papa). One day Henri’s Uncle Jacques from New York City invites Henri and his parents to move there and live with him. Jacques sends money along with the invitation so that they can buy a boat for the trip. There is only enough money for Papa to buy a small, rickety boat that they are not aware has a small hole. The family sets out; however, the trip quickly turns dangerous and the boat capsizes. Papa places Henri on top of the boat for safety as he and Manman slowly drift away. The next day Henri is picked up by other Haitians on a bigger boat and makes it safely to Florida. The note his mother put in his pocket has his uncle’s name and contact information which allows Henri to find safety in the United States.

Traumatized with grief, Henri no longer speaks. Without speech, Henri has only a plastic water bucket to speak for him. Henri’s friend Karrine tells him to thump on it once for yes and twice for no. Henri’s bucket soon becomes his drum, reminding him of his parents and his life in Haiti when he regularly carried a bucket to market for clean water. The bucket becomes a link to his past and both figuratively and literally an instrument for expressing his emotions. Through his drumming and his uncle’s and friends’ kindness, Henri is able to slowly find his way in his new home without his parents.

The illustrations are bright, beautiful and detailed. Boyd’s watercolors show Henri’s emotional disposition in the ocean and vividly detail the dangers of crossing the ocean in a rowboat. Boyd’s illustrations expressively convey the sentiments of hope, danger, trauma, and finally hope again with the use of bold primary colors.

Calling the Water Drum delves into challenging concepts around the theme of immigration such as loss, grief, and trauma. The story highlights realities faced by individuals from all over the world who seek a better life out of poverty or refuge from harm in another country. The topic of immigration is appropriate for discussion in any classroom in the United States as it is a subject that affects all individuals. Circumstances of the immigration experience are vast, and providing students with many examples allows them to have a broad perspective on the subject. Calling the Water Drum offers students a powerful story from a child’s point of view. As the author, Redding stated in an interview “Henri’s story is painful, yes, and it’s full of hope too.” Every immigration story does not have a perfect ending, but rather offers a better understanding of the experience to outsiders looking in at the experience, and connections for those who share an immigration experience.

Calling the Water Drum can be paired with books to cover a number of themes though trauma or immigration seem to be the most natural fit. Other children’s literature appropriate to pair with this story are Marvelous Cornelius: Hurricane Katrina and the Spirit of New Orleans by Phil Bildner and John Parra (2015) and A Storm Called Katrina by Myron Uhlberg and Colin Bootman (2015). Both of these books deal with the aftermath and displacement of individuals from Hurricane Katrina. Henri’s friend, Karrine, in the story Calling the Water Drum, was displaced after Hurricane Katrina to New York, and similar to Henri lost her father in the storm; secondly, students can learn that reasons for individuals immigrating can also take place within the United States such as natural disasters.

Calling the Water Drum is LaTisha Redding’s first picturebook. She was inspired to write this story based on the memories of childhood Haitian friends’ stories of how they arrived in the United States. In the endnotes of the book, Redding tells readers that when she moved to New York City as a child from the southern United States, she had many classmates who had immigrated to America from around the world. Each of her classmates had their own immigration story, but all her Haitian classmates’ stories were much different because they were full of risk and death. Those stories stayed with Redding and she dedicates this story to them. Today, Redding lives in Florida.

Aaron Boyd has been an illustrator for over 20 years and has illustrated over 30 books. He lives in Milwaukee, Wisconsin. Several books he has illustrated include Janna and the Kings (2016) and Babu’s Song (2008), both Lee & Low Books. His work has been recognized by the Children’s Africana Book Award and the International Literacy Association (ILA). His medium of choice is watercolor but he has stated that he also dabbles in inks, paper, crayon and oils.