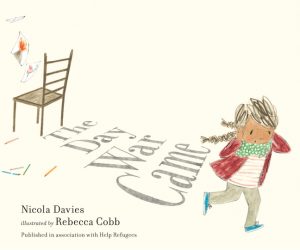 In our human interactions and our interactions with books, hosting someone else’s story requires us to stand with and listen with greater openness, which then allows us to build a more just world. Of all the books I’ve read this year, none has caused me to consider the significance of hosting more than The Day War Came. Written by Nicola Davies and illustrated by Rebecca Cobb, the book asks readers to, “Imagine if…”. On the opening spread, a little girl sits at the kitchen table, eating breakfast with her family before heading off to school. Flowers are set on the windowsill, her father sings a lullaby to her baby brother, and her mother kisses her on the nose. The school day begins like any other day. Cobb’s illustrations, a mixture of ink, watercolor, colored pencil, and pencil, show the little girl and her classmates learning about volcanos and tadpoles and drawing pictures to be hung on the classroom walls. Then, war comes, and everything changes. On the pages that follow, visual depictions of a darkened town in the aftermath of an attack spill out to the edges of the paper. Davies’ conveys trauma through what the little girl can and cannot describe, “I can’t say the words that tell you about that blackened hole that had been my home. All I can say is this: War took everything. War took everyone.” A series of vignettes show her wounded, orphaned and displaced by war. She seeks shelter, but is repeatedly turned away.

On the back pages of the book, Davies shares how her inspiration to write this story came from the stories of millions of children who remain the most vulnerable in our current refugee crisis. One story, in particular, spoke about a little girl who was denied access to education because there were not enough chairs in the classroom. In The Day War Came, she asks readers to, “Imagine that there was no welcome at the end, and no room for you even to take a seat at school.” She then shows what might happen if even one person were able to host this story, “And then imagine that a child, just like you, gave you a gift…” I will not spoil the ending, but it is so very, very hopeful!

Throughout this review I have highlighted scenes from the book and quoted lines from a poem that Nicola Davies wrote and published on the Guardian newspaper’s website. She wrote the poem in response to the U.K. government’s refusal to accept 3,000 unaccompanied refugee children and the US government’s decision to lower the annual refugee ceiling. What followed was an outpouring of support from ordinary people, artists and illustrators who posted images of empty chairs with the hashtag #3000chairs. One suggestion for classroom teachers is to pair The Day War Came with Davies’ poem and discuss how the two inform each other. In addition, the book is connected to the Help Refugees project. Even if a school is not in a position to make a financial contribution, the website shares statistics and stories that personalize refugee experiences and may inspire students to take other forms of action. A book that might also support this message is 14 Cows for America (Carmen Agra Deedy & Thomas Gonzalez, 2009), which tells the story of the extraordinary gift the Maasai people of Kenya bestowed upon Americans in the wake of 9/11.

Nicola Davies has two successful careers—she is a zoologist and a children’s book author. Some of her books of fiction and nonfiction include, King of the Sky (2017) and The Promise (2014), both illustrated by Laura Carlin; Bat Loves the Night, illustrated by Sarah Fox Davies (2004) and White Owl, Barn Owl, illustrated by Michael Foreman (2009). See her website for a more extensive list: https://www.nicola-davies.com/. Also, check out her blog post and learn about how she built a chair while writing The Day War Came: https://nicola-davies.com/blog/?p=960.

Like Nicola Davies, Rebecca Cobb is from the United Kingdom. She has several solo books including, Missing Mommy (2013), Lunchtime (2013) and Aunt Amelia (2014) as well as captivating work done in collaboration with author Julia Donaldson in The Paper Dolls (2013) and The Everywhere Bear (2017). See more at http://www.rebeccacobb.co.uk/